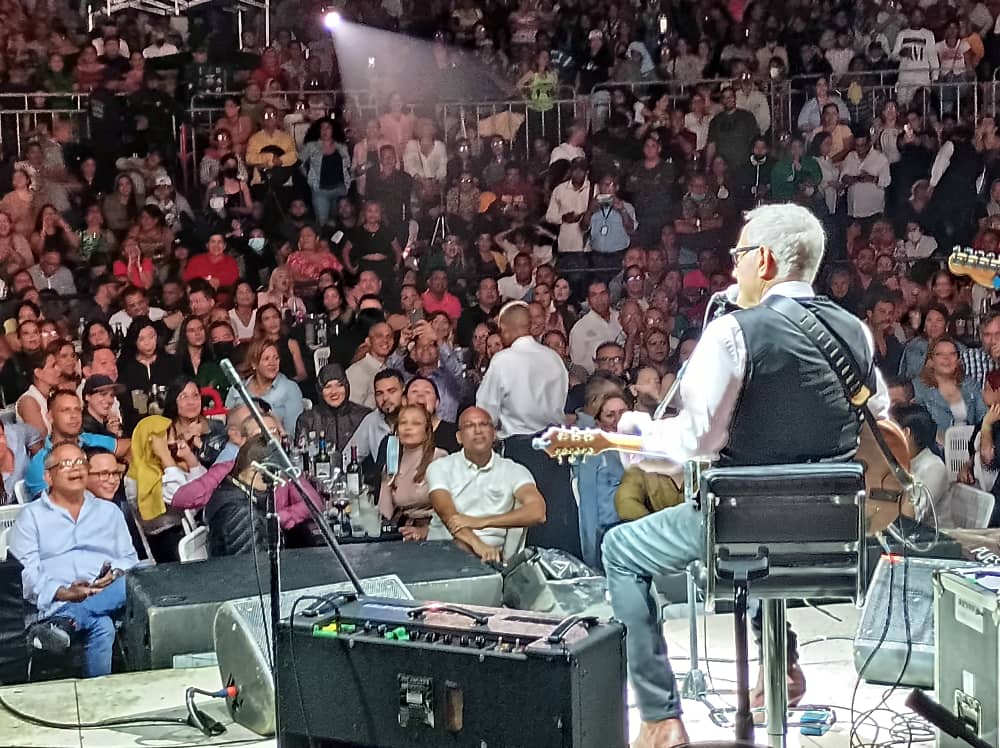 The cultural program Concierto en la Concha developed by the Mayor’s Office of Independencia, Yaracuy state, at the facilities of the Concha Acústica of this jurisdiction, presented a new musical event over the weekend in which the singer Yordano and other local groups were presented.

The event filled the 3,000 seats provided by the stands of the place, plus an additional 1,000 people who enjoyed the evening standing, inside and outside the facilities.

The singer-songwriter recalled his songs that launched him to fame in the 1980s and 1990s, such as Manantial de Corazones, I’m Not Going to Move a Finger, In That Secret Place, A Flower of Skin, Scrap of Love, Stealing Blues, For These Streets and other hits that his followers sang loudly during the almost two hours that his presentation lasted.

Yordano, already over 70 years old, retains that strength and spirit that everyone remembers, with an unmistakable voice that has not changed over the years. For the audience present, made up of contemporary adults and also young people of all ages, it was an unforgettable show.

The mayor of Independencia, José Mujica, recalled that since the Concha Acústica spaces were rehabilitated, two free mega-concerts have been held: Karina’s, last month, and Yordano’s, this weekend.

He explained that the purpose is to carry out a cultural activity at least once a month to contribute to the distraction of the Yaracuyano people, who can access these concerts for free. The events are financed with the sponsorship of private companies, who collaborate with the mayor’s office with their realization.

“After two years of confinement due to the quarantine due to the covid-19 pandemic, the town needed a bit of healthy distraction and cultural entertainment, which is why we are organizing these concerts with a lot of sacrifice and effort so that we can all enjoy them,” he said. Mujica.

The mayor stressed that despite the fact that the vaccines have given excellent results and the levels of contagion have dropped significantly, the guard has not lowered and the health and prevention controls remain as on the first day.

For this reason, before each concert the spaces are completely disinfected with a combined solution of water and chlorine, to avoid possible contagion. Likewise, the use of face masks is mandatory for everyone, without exception, when entering the Acoustic Shell.

Mujica took advantage of the occasion to announce that on June 19 the Concierto en la Concha program will have as special guests the Venezuelan mega band Guaco, which will present the best of its repertoire, from its beginning as a musical group to its most recent successes.

He said that for this opportunity several local artists and bands will also alternate on stage, bringing their rhythms and the best of their repertoires to all those present.
Likewise, prevention and biosecurity measures will be accentuated to avoid possible contagion of Covid-19 and it will be required that the attendees also do their part and use their corresponding face masks.

Regarding security, the mayor pointed out that, as in the last two concerts, a special security operation will be deployed, such as the Bolivarian National Police in the facilities of the Acoustic Shell and its surroundings to guarantee the protection of all attendees.