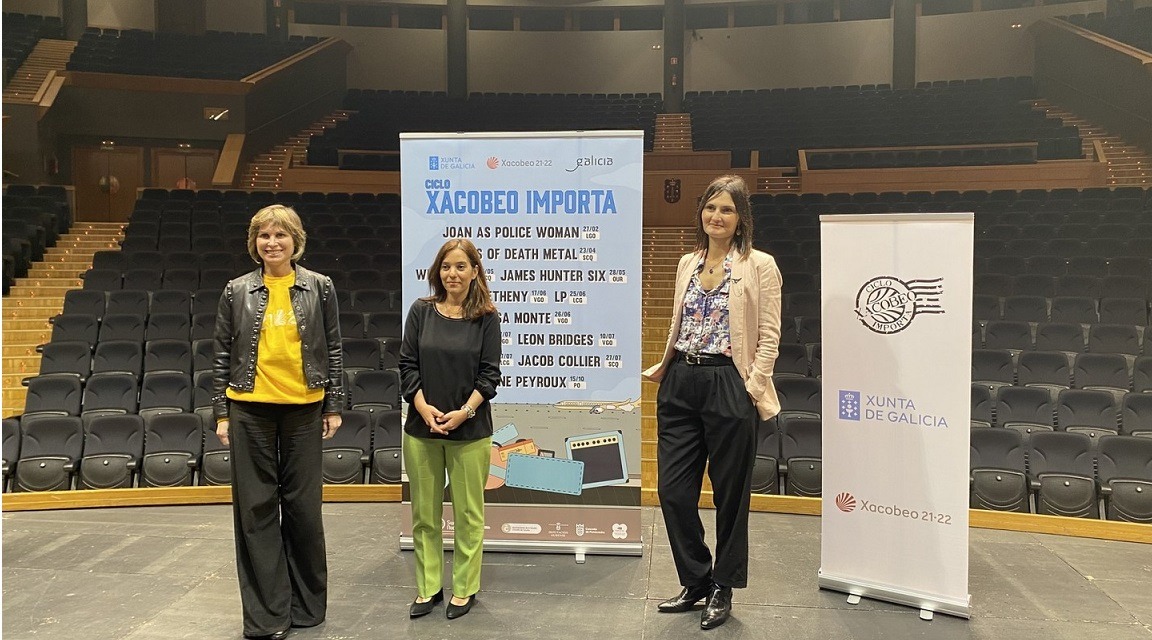 The director of Tourism of Galicia, Nava Castro, presented the poster of performances in an act in which she was accompanied by the mayor of La Coruña, Inés Rey.

Outstanding exponents of soul, blues or contemporary jazz such as Path Metheny, León Bridges or the famous band Simple Minds complete this year’s program, which will allow you to enjoy these international artists until October

The Palacio de la Ópera de Coruña hosted the presentation of the new edition of the concert cycle Jacobo Mattersin an act in which the complete poster of concerts programmed until the end of the year within the framework of this initiative, inserted in the programming of the Xacobeo 21-22 and in the Xacobeo Concerts, was made public.

On the occasion of the celebration of the Holy Year, and as was done in the 2010 edition, the cycle Galicia Importa becomes the Jacobean Cycle Mattersto present its most important edition to date, with a dozen concerts with internationally renowned artists, some of them with exclusive dates in Galicia.

In the presentation, in which the director of Tourism of Galicia, Nava Castro, and the mayor of La Coruña, Inés Rey, participated, the person in charge of Tourism emphasized the importance of the commitment to a diverse, quality musical offer and, above all, decentralized throughout the territory and aimed at all types of audiences, principles on which all the programming for the celebration of this Holy Year is based.

In this sense, Nava Castro valued the success achieved by this cycle of concerts throughout the ten editions in which it has been in operation, a success that ‘allowed Galicia to be placed on the independent music scene, making it possible for bands and internationally recognized artists will stop in our territory, many times as the only stop in Spain on their world tours,’ he explained.

In addition, he recalled that he remembered that the band Simple Minds, for example, returns to Galicia 20 years after its last concert in the community, and does so hand in hand with this cycle.

Variety of musical styles, stages and locations, but always under the principles of originality and quality of the proposals, the 11th edition of Xacobeo Importa includes a dozen concerts that began in February and will be held until the month of October in La Coruña, Santiago, Vigo, Pontevedra and Orense, cities that will host the planned concerts on stages such as the Palacio de la Ópera itself, the Sala Capitol, the Mar de Vigo Auditorium or the Pazo de la Cultura de Pontevedra, where it will end in October cycle.

The program for this edition included the concerts by Eagles Of Death Metal and Joan Las Police Woman, already held, and will include concerts by the English White Lies and The James Hunter Six in May.

In June, the living legend of jazz Pat Metheny and the LP concert will perform, on the 25th in A Coruña, as well as the queen of Brazilian music Marisa Monte, who will perform on June 26 in Vigo. The program is completed with concerts by the Danish Agnes Obel on July 7 in Vigo and by the world soul star Leon Bridges on July 10, also in Vigo, to end in October with Madeleine Peyroux’s concert in Pontevedra.

‘Xacobeo matters’, a cycle with concerts in five cities