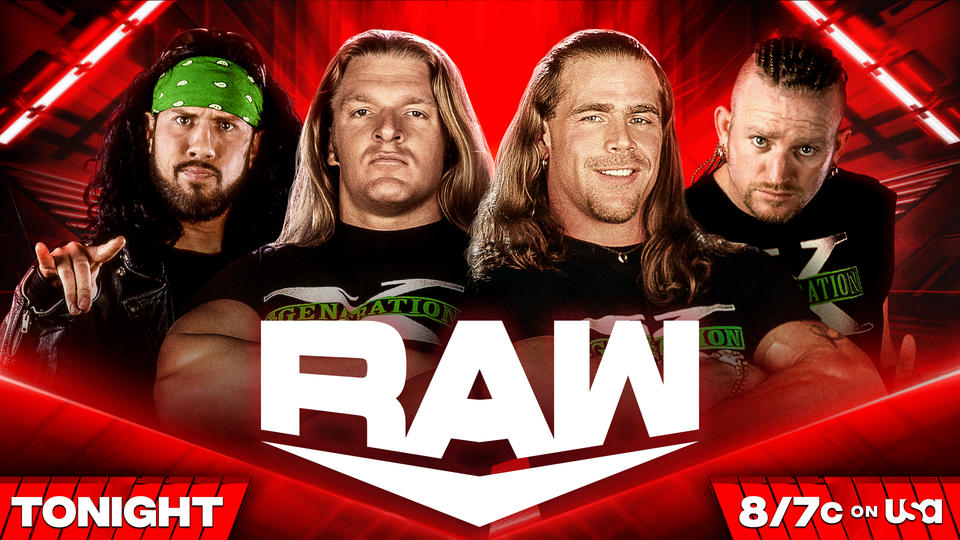 This new special “season premiere” episode of WWE RAW opens this Monday, October 10, 2022 live from the Barclays Center in Brooklyn, New York. D-Generation X (Shawn Michaels, Road Dogg and X-Pac) are backstage and everyone is wondering if they’re ready to celebrate the band’s 25th anniversary tonight.

Triple H leaves his place in “gorilla position” and tells his friends that they can’t do tonight what they used to do, that they have sponsors and they can’t say no anything, like talking about their genitals or swearing. Follows a chain of words like “penis” repeated by HBK, Road Dogg and X-Pac, but obviously words like “f*ck” censored by a beep and the DX logo. Triple H ends up using those same censored words to wrap up the comedy segment, asks his teammates to go from there and hold on.

The Bloodline – Sami Zayn, Paul Heyman, Solo Sikoa, Undisputed WWE Universal Champions The Usos and Undisputed WWE Universal Champion Roman Reigns – make their entrance to the ring. Microphone in hand, Reigns asks fans to “recognize him”. He says that you should always focus on the future when you are the best ever, without looking at the past. Nevertheless, he can’t forget last Friday.

Reigns remembers what his father once told him. Only a fool can be in the Bloodline if he is the weakest. “Are you a fool…Jey?” Reigns asks his cousin. Sami Zayn interrupts him and apologizes for this. The audience explodes. Zayn tells Reigns that he asked him personally to take care of Jey, that he was his problem now. Reigns lets it go, with a wide grin on his face.

Zayn says Jey’s demeanor isn’t very “Ucy”, unlike Jimmy. The latter is always smiling, everyone adores him. He also praises Solo. Zayn comes back to Jey and just asks him to be cool. Jey gets mad and asks Roman Reigns why he’s doing this to him, he’s his blood, his cousin, his family. Matt Riddle’s theme launches. Microphone in hand, Riddle says they should talk about his victory over Seth Rollins in the Fight Pit this Saturday at Extreme Rules instead.

Riddle challenged Roman Reigns for the Universal title, believing he deserved another shot. Reigns refuses. Riddle then offers to confront one of the members of The Bloodline. Jey provokes Sami Zayn and pushes him to assume his role of Honorary Uce by accepting the challenge. Riddle also provokes him, using the word “yeet” (to say yes) while Zayn refuses because only the Bloodline can use this word. Jey taunts Zayn again, asking him if he’s going to let Riddle disrespect them like this. Zayn says no and challenges Riddle to a match tonight. Zayn asks Riddle if he accepts and the latter replies “yeet”.

A summary of WWE Extreme Rules results is broadcast.

Garnago lands a superkick on Theory to knock him out of the ring, followed by a DDT-turned suicide dive on the outside and finally the One Final Beat in the ring for the three count and the win.

During the match, Rhea Ripley and Dominik Mysterio arrive ringside to distract Rey. Despite everything, the veteran manages to achieve the 619 followed by a splash for the final fall and the victory. After the match, Dominik gets in the ring and again demands that his father hit him. He must and it’s now or never. Damian Priest and Finn Balor get in the ring but Rey gets rid of them. Dominik stops him with a lariat. He asks her once more to hit him but Rey refuses. He turns his back on her and Dominik hits him again. Rhea holds Rey on the ropes and Dominik lands a 619. The commercial starts.

After the break, The Judgment Day is still in the ring. Microphone in hand, Finn Balor plays the rooster and boasts of having made Edge say “I quit”. A summary of the meeting is broadcast. Afterwards, Dominik says only one thing made him happier than the 619 he gave his dad tonight and that was his face last Saturday. Balor now goes to AJ Styles and gives him an ultimatum. The Styles theme launches.

Styles joins Judgment Day in the ring. He affirms to Finn that he is not there to argue with him but to prove him right. More than ever, he needs friends, a family. He kneels in front of him, lowers his head and takes Balor in his arms. At the same, AJ says “I wasn’t talking about you”. The theme of The OC is launched! Luke Gallows and Karl Anderson rush to the ring! Back, the Originals line up with AJ and attack Judgment Day. Rhea, Priest, and Dominik manage to flee, leaving Finn alone with Gallows, Anderson, and AJ Styles, but he also manages to flee to the stage to join his group there and end the segment.

Behind the scenes, Roman Reigns, Solo and Paul Heyman get ready to get in the car to go visit New York. Jey Uso wants to join them, but Reigns tells him to stay to ensure their Honorary Uce wins tonight. Jey isn’t particularly happy but accepts the Tribal Chief’s choice.

LeRae manages to make a small package on Bayley to rivet his shoulders until the count of three to clinch the victory. After the match, IYO SKY and Dakota Kai attack LeRae on the stage and then in the ring with Bayley. RAW Women’s Champion Bianca Belair charges in to help LeRae, but Damage CTRL keeps the advantage and tackles both women, leaving them in the ring to wrap up the streak.

Behind the scenes, Maryse reassures her husband The Miz about his birthday party which will take place after the commercial, saying that they should not worry about Dexter Lumis. Maryse gives him a present and it is a baseball bat.

After the break, Maryse is in the ring, decorated with balloons but also full of gifts and a cake. Miz is offered “giant balls”… to “complete with “his huge bat”… Miz lifts a present and finds himself in it under Dexter Lumis’ head. Miz puts the gift back and smashes it with his bat. He does the same with all the presents and knocks over the table, but Lumis has disappeared.

Lumis reappears on the other side of the ring and attacks Miz. Giggling, Miz pushes Maryse into the cake. Miz flees, leaving his wife alone with Lumis. She flees in turn and Lumis takes the knife to pierce the balloons then cut a piece of cake to then eat it.

Behind the scenes, Shawn Michaels, X-Pac and Road Dogg cheer on two local competitors ahead of their match against Omos. The Miz and Maryse arrive and ask after Triple H. The latter complain about Lumis. Miz says he’s ready to do anything to get rid of him once and for all. Road Dogg offers him a deal: he faces him next week and if he wins, Lumis must leave the WWE. However, if he loses, Lumis will sign with the company. Miz agrees.

Less than two minutes and a double chokeslam are enough for Omos for the final account and victory. After the match, Omos delivers two more chokeslams to his opponents.

United States Champion Bobby Lashley enters the ring before his championship match against Seth Rollins. Microphone in hand, he claims to have some of the best such as Drew McIntyre, Brock Lesnar and Roman Reigns. Now Seth Rollins thinks he can tackle him because he feels he deserves a title shot. Lashley demands that Seth Rollins come to the ring but… Brock Lesnar’s theme resonates within the Barclays Center!

“The Beast” makes his comeback and enters the ring to join the United States Champion. The audience chants “holy shit” and Lesnar responds with the same words. Lesnar says “good evening New York” before saying “good evening Bobby Lashley” then immediately hits him with an F5. The audience chants “one more time” and The Beast performs a german suplex then another F5 on Lashley. The fans still chant “one more time” but Lesnar takes Lashley’s arm to perform a Kimura Lock. Lesnar leaves the ring and the commercial starts.

After the break, Lashley is helped by doctors and officials. He is holding his arm and is in pain. despite everything, Seth Rollins enters and claims his match. Lashley begins to join the internship. Rollins takes a microphone and claims his match. He taunts Lashley, saying he’s supposed to be a warrior, a soldier. It brings shame to the title of the United States and to the country.

Lashley takes these provocations to heart and steps into the ring. He asks the referee to ring the bell. The latter runs. Lashley rushes Rollins to spear but Rollins counters him in Pedigree followed by a pinfall but Lashley breaks it. Splash by Rollins, followed by another unsuccessful pinfall. The game continues.

Rollins manages to make two consecutive stomps on an injured and weakened Lashley to rivet his shoulders until the count of three and win the United States Championship for the second time in his career.

A cryptic message from Bray Wyatt interrupts commentators. A deep, distorted voice repeats “rejoice in what you are”.

Distracted by Jey Uso ringside, Zayn gets distracted and gets tricked by Riddle, who takes control of the match. Riddle strikes the RKO for the count of three and clinch the victory.

As Riddle barely begins to join the wings, the theme of D-Generation X resounds and the group makes its legendary entrance to the ring. Microphone in hand, X-Pac asks fans to make some noise for Chyna. Road Dogg does his famous New Age Outlaws catchphrase and lets the audience respond “The Bad Ass Billy Gunn.”

Triple H talks about the 25 years of existence of DX and the group continues their legendary catchphrases, including “let’s get ready to suck it”. Triple H thanks the fans. Shawn Michaels laughs that if they come back in 25 years the fans will have to end their suffering. “And if you’re not down with that, we got 2 words for ya… Suck it!”. RAW renders the antenna.