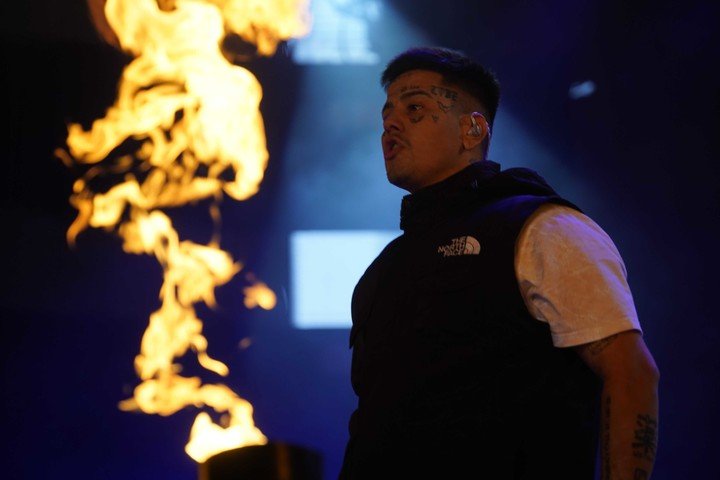 The 26-year-old singer-songwriter started last night with the first of his four recitals at El Fortín. There were 45 thousand people.

Last night, Thursday, at 9:20 p.m., Duki began the first of his four recitals at the Vélez Sarsfield stadium. The second date will be tonight (Friday) and the last two will be on November 11 and 12.

The historical fact of arriving at a huge soccer field suggested that there would be many special guests, a kind of live feat string. And so it was: Nicki Nicole, Bizarrap, Khea, FMK, Lit Killah, CRO, Rusherking, Lucho SSJ, Obie Wanshot, Rels B and Emilia Mernes were there. A dream-team of talented friends with whom to share the party.

Absent with notice: YSY A and Neo Pistea, who had their own shows -as Duki told from the stage- and dedicated the “Devil Mode” section of the show to them (the group that the three had).

The preview and the setting

To demonstrate the enormous expectation that this show generated, and the fanaticism of its fans, during the previous hours a very long line was already assembled, waiting for the doors to open.

The staging was not a surprise, since earlier this week images of the stage could be seen when Vélez played at home for the Argentine tournament and behind one of the arches was the monstrous structure of Duki, which seemed even more impressive than that of international visits like Daddy Yankee.

The staging of Duki’s first recital at the Velez stadium. Photo: Emmanuel Fernandez

There was an important central screen, two large ones on the sides and two curved LED strips on the sides of the interior of the stage, where very well thought out and executed visuals were projected.

The repertoire he had planned was a secret, but everyone took for granted a review of all the hits from a discography that includes two studio albums, a live album, two EPs and more than 70 singles and remixes.

The first song was Givenchy, from his recent album Reggaeton Season 2. Duki appeared on the central platform, glued to the giant screen. She was wearing shorts, a white T-shirt and a NorthFace vest.

Rockstar did immediately, with his phrase “Who do I think I am? The best at least these days. Every league has its Jordan. It’s obvious that I’m mine.”

When he finished, he asked for a pause: “I need 15 seconds to breathe. I just realized where I’m standing and I can’t believe it. I made it thanks to you. Listening to my music changed my life”.

Then followed Te Sentís Sola, Sudor y Trabajo, with drums, bass and live guitars, very rocky. Other songs, on the other hand, had the keyboardist on stage, and others were just tracks.

Duki especially greeted the people in the background, where he said that he was at his first show in Vélez, when he was very young and his father took him to see Charly García’s Underwater Concert.

Also on the list of more than 40 songs were the hits Hello Cotto, I don’t sell Trap, Star Boy, Sold Out Dates, Hit Boy, Knocking down the club, I already left, Goteo, She Don’t Give a Fo.

The first was the Spanish Rels B, who excelled at Pintao, and the slower and more rhythmic PInifarina.

With YSY A and Neo Pistea gone, it was time for the Devil Mode themes: Back to the Moon and Quavo.

After an introduction by the legendary narrator Osvaldo Príncipi, an unusual guest appeared on the screens: Duki’s other self, who challenged him and discussed from one screen to another, while Duki moved to a boxing ring located at the top of the tower of the sound man There he did Hello Cotto and Ticket, dedicated to his father, taking advantage of the fact that the lyrics end by saying “How do you want me not to humiliate? If I am Guille’s son.”

The first hour had just passed, and many visits were missing: with CRO he made Alas – Fuck Love and Hijo de la Noche. With Obie they gave a great version of Hielo – Mi Angelito. With Lucho SSJ he did Forgive me if I’m late and how much. With Rusherking he sang in addition to me, with Lit Killah he did Mala Mia, and with Tiago FMZ and CRO they did Interestrellar.

Overwhelming, the series continued with Emilia (they said “I love you” after doing As If It Didn’t Matter), Rels B (Yin Yan), Nicki Nicole (he told her “You’re a pride for everyone” at the end of Ya Me Fue) and Bizarrap (Remix Malbec), who told him: “You are the 1, thanks to you we are all here”.

The encores were She Don´t (with Khea) and again Givenchy. What has been said: a true dream-team.

Without a doubt, 2022 will go down in the history of Argentine popular music as the year that trap came of age. When the season ends, massive shows will have passed at Luna Park (Cazzu, Trueno, YSY A), Movistar Arena (Tiago PZK, Emilia Mernes, Lit Killah) and Obras (Ca7riel and Paco Amoroso), in addition to stadiums such as Vélez and Argentinos Juniors (Wos).

This style took its first steps almost ten years ago, and the first big local scene was consolidated in 2015, with the verbal battles in El Quinto Escalón, which quickly went viral on the networks.

That’s where Duki comes from, the artistic name of Maurio Ezequiel Lombardo, who last night won the award for the first of his generation – and the youngest Argentine artist – to fill a soccer stadium.