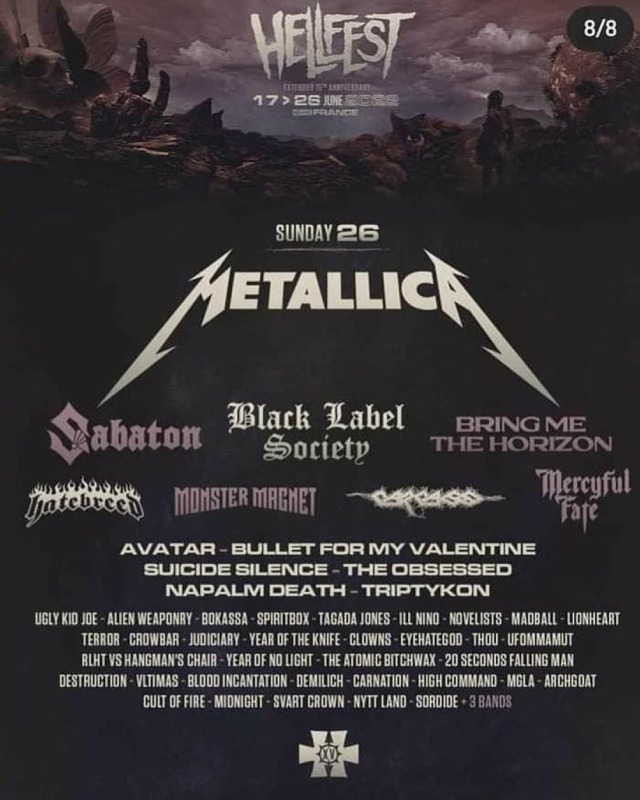 Metallica. Hellfest. Hellfest 2022. Metallica, the very top of the metal scene. A “pattern of the genre” who does not know Clisson, whom many (everyone?) dream of seeing on MainStage 1. A holy grail? Hellfest, one of Europe’s reigning metal festivals. Hellfest 2022? THE festival that kills them all. After this one, everything is likely to lack flavor. In any case, a unique event, an accomplishment, a challenge in the face of the adversity of recent years. After our red thread of this extraordinary Hellfest, here is for the pleasure a more detailed account of the historic concert of the Four Horsemen in Clisson.

Quick recap of previous episodes: June 2019, Hellfest is over. October 2019, opening of the ticket office without any name. Tsunami. Poster part announcement November 2019. Faith No More, Deftones, SOAD. The coronavirus invites itself to the party. March 16, 2020, confinement, we all stay at home, life is different. April 2020, cancellation of the 2020 edition, postponed to June 2021. May 2020, first rumors of a double edition. February 2021, cancellation of the 2021 edition. June 2021, formalization of the double edition of 2022, over seven days (three plus four) with Metallica (OK, and the Guns N’ Roses too). The interesting twist is that 2020 ticket holders will get priority for second weekend passes. This is how, in a jiffy, the second weekend is also sold out. But… yes, yes, “It’s a long way to the top” resounds on the site… Clint Eastwood Blondin appears on the screen… What is it? 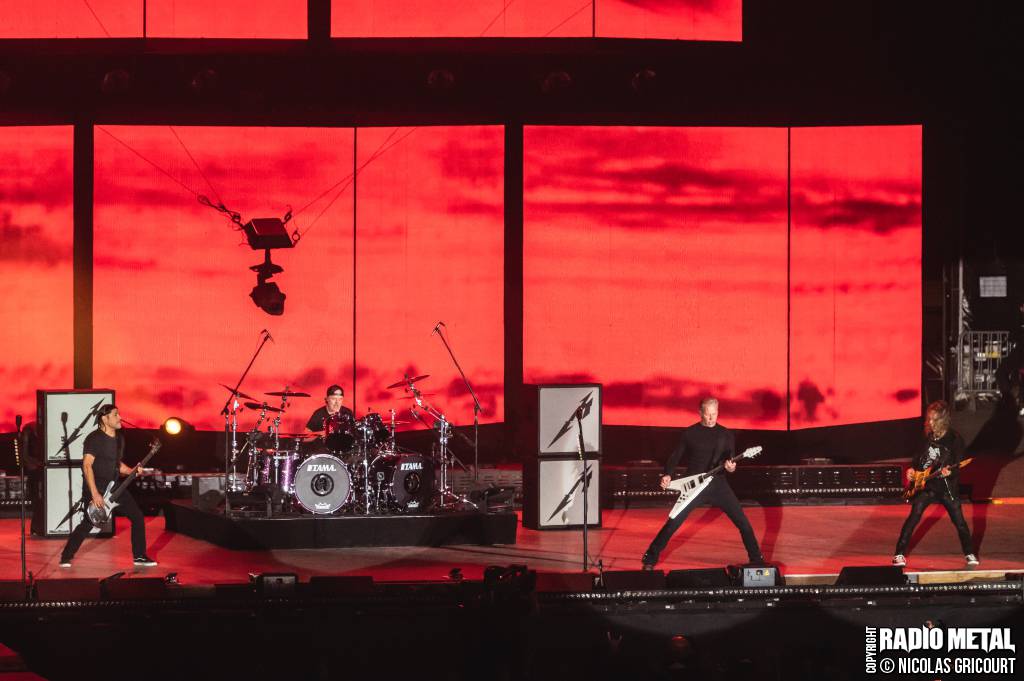 “Whiplash” gets the ball rolling! It’s 11:10 p.m. The stage is dressed in red lines, the giant screens are also circled in red. Sober. This first title ends with a slightly revisited end, improved compared to the studio version and the public is immediately solicited. “Let’s have some fun tonight Hellfest, right?” » Launches James Hetfield who seems in good shape before the Four Horsemen send a supercharged « Creeping Death ». In the background, red shapes. Giant screens allow sixty thousand people to see everything. The very dynamic capture allows you to really immerse yourself in the show. The first rows obviously benefit from the proximity, from the advances of the stage used by the musicians. However, the power of the group, the screens, a James experienced in the exercise of leading a crowd allow everyone, even the deepest, to benefit from the experience.

“Are you alive? “. The singer keeps in touch with the fans. And “Enter Sandman” delighted a conquered crowd. The cubic shapes of the stage background now change to blue, to white. This American classic slams into the Clisson night. But what will remain for the reminders? The group stretches the end of the piece accompanied by “Hey! Hey! ” public. In three titles, we feel some trends. James in good shape. A group in form that places here and there a “live” touch on the titles, improving their execution. It starts very well! It feels like the band hasn’t been this strong in a long time. OK, there are a few approximations but it’s part of Metallica, nothing that taints the performance.

Introducing “Harvester Of Sorrow”, James jokes that that’s it, they’ve played their best songs. A beautiful moment of this concert, calmer but no less intense comes with “No Leaf Clover” which delights the crowd. James stands on the advance, the group joins him. Around, the flames of the Hellfest structures embellish the whole. Flames ? At this stage, only those of Hellfest warm up the night. Apart from the cubes in the background which are adorned with different colors, the scenography is very sober. “Are you having fun? So this is Hellfest. It’s different from the hell I live in, it’s beautiful,” said the singer. “Finally Metallica is at Hellfest. That’s an understatement! “I hope you are ready to be loud! » he announces before he makes the public sing and the Americans launch a Dantesque « Sad But True » with this original beginning, almost a cappella. Huge success for this classic.

James then addresses the crowd to find out who has seen Metallica live, who is seeing the band for the first time. The clamor of the crowd is impressive! James welcomes newcomers. He then plays with the album Saint Anger, launching a poll to find out who likes or dislikes this opus. He raises his thumb, collects little noise, he lowers his thumb, collects more noise. The spectators therefore do not appreciate this album too much. This does not prevent the group from launching the angry “Dirty Window”. There follows, after a short interlude by Kirk Hammett, a beautiful version of “Nothing Else Matters” which, with its green ray pad, offers a moment of calm. The Hellfest ball also reacts, beating blue like a kind of heart, smoking, its holes glowing red. The show is all over the site! Huge success for this title.

“For Whom The Bells Toll” sees Kirk and Rober Trujillo performing on stage, facetious kids who are obviously happy to be there. Because obviously, Metallica is made up of four musicians. Even Lars Ulrich often gets up from his drums so that everyone can see him better. Pyrotechnics finally make an appearance on this track from the album Ride The Lightning. The flames are on stage and come out of the ball too. Still, it’s class! The flames will stay on “Moth Into Flame”, even grow to the sound stage and run on a line behind Lars. The classic neon decoration that accompanies this piece is also present. On “Fade To Black”, James takes the time to explain that this title is about suicide, indicates that we have to talk, because “I love you, you are loved, you are family”. He also notes that it’s a bit of a taboo subject that we’re not supposed to talk about.

After submitting Saint Anger to public opinion, it’s Kill Em All’s turn. No comparison possible for this album, the cornerstone of metal. “Are you still out there? » launches James, haranguing again and again the public. Did you know that the American borrowed this phrase from Phil Lynott, late Thin Lizzy bassist? “Seek And Destroy” brings the concert to the encores which end on “Master Of Puppets” a superb performance by Metallica. A slap, in fact. With a list of songs offered in the form of “best of” even with the impasse on a “Fuel” by Load. “Did you have fun? asks the singer as a last question. The public reaction leaves little room for doubt. Each of the group members will take the microphone to say a word, thanking the spectators for a sweet ending. As closing of the festival of the century, could one dream better?

Damage, Inc.
One
Master Of Puppets

When Metallica made history in Clisson – RADIO METAL