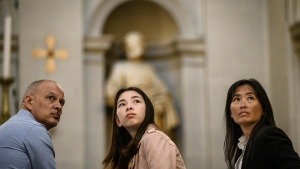 The laywoman from Lyon who will be beatified on May 22 was a tireless missionary of charity, who experienced many sufferings. She drew her strength from her love for Jesus, for the Church and for Mary, as well as from daily Eucharistic communion.

As soon as she was converted in 1816 (she was then 17 years old), Pauline Jaricot, daughter of a couple of sewing silk merchants from Lyon, had the supernatural intuition that her life would be spent in the shadow of the Cross. On Palm Sunday 1817, Jesus, through an interior voice, asks her: “Do you want to suffer and die with me? She answers positively, while ignoring what form this sacrifice will take. In fact, she will be ruined by two crooks on the occasion of the purchase of a factory which she wanted to make a model of work unit based on Christian values. The business will turn into a nightmare for Pauline who will spend the rest of her life in poverty, with the constant concern to repay her creditors.

But before the occurrence of this catastrophe, Pauline had founded the Work for the Propagation of the Faith (now called “Pontifical Mission Societies” today) which provides spiritual and material assistance to the missions throughout the world, and the Living Rosary, a vast network of lay people who pray the Rosary for the evangelization of peoples. However, to make matters worse, she will be denied the motherhood of her two works which were soon to have worldwide success! Slandered at the end of her life by those who saw in her misery the sign of imposture and divine reprobation, it was only after her death that justice would be rendered to her. She will be beatified on May 22, 2022.

She had such a keen awareness that her suffering was a participation in the cross of her Master that she wrote: “Oh! how true it is, then, that it is a very bitter thing for the heart of the Incarnate Word to be refused by hearts! »

The comfort of the Eucharist

Although suffering from all these misfortunes, Pauline never complained in front of her visitors. Where did she draw the strength to endure her trials? First, in the meditation on the Cross of Jesus. She understood that her existence was taking, over time, the path of Golgotha ​​and that she would be more and more configured to the suffering Christ, as He had prophesied to her the year of her conversion. “God alone knows what the end of all my struggles will be, the fact remains that, if it must end on the cross, I want it to be in the company of the Savior, and at his right, like the good thief. Mary will obtain the grace for me,” she wrote during her years of affliction. It was in Jesus, in fact, that she drew the necessary resources to forgive her persecutors and accept her suffering, which she offered in reparation for the decline of the faith and the recovery of the Church in France. In this regard, she was so keenly aware that her suffering was a participation in the cross of her Master that she wrote: “Oh! how true it is, then, that it is a very bitter thing for the heart of the Incarnate Word to be refused by hearts! »

Her devotion to Mary, the humble servant, developed in her a constant concern for the condition of the working class.

Next, Pauline found comfort in the Eucharist. As soon as she was converted, she got into the habit of taking communion daily, which was very rare at the time, especially for a laywoman. In this, she followed the example of her parents, who never started a working day without attending mass at 4 o’clock in the morning! At the end of her life, in the state of misery in which she found herself, the Eucharistic fast (we weren’t kidding with it at the time, you had to be fasting from the night before at midnight) caused her great pain. physical when she was on the move. Pauline Jaricot remained faithful to daily communion in the midst of her misfortunes. Jesus was her consolation and her strength, to whom she had totally dedicated herself from her youth on Christmas Day 1816 by making a vow of perpetual virginity. Pauline represents an example of a consecrated woman who wanted to exercise her apostolate while remaining lay. There too, she was a pioneer.

His love for the Church and the Virgin Mary

Pauline Jaricot also drew her courage from her love for the Church. It is this love that explains the unparalleled zeal she displayed in founding the two major works of the Propagation of the Faith and the Living Rosary — works intended for the growth of the Church. This love for the Church also explains the intuition she had of the lay apostolate which was to revolutionize the Church a century later. Finally, his love for the Virgin enabled him to respond to so many misfortunes with supernatural joy. Her devotion to Mary, the humble servant, developed in her a constant concern for the condition of the working class. In this social area she was ahead of her time in the Church. Her last words on this earth were to Our Lady: “Mother! O my Mother! I am all yours. It was normal for the saint to fall asleep thinking of the One whose living Rosary was going to help powerfully to propagate devotion.

Cross, Eucharist, Church and the Virgin Mary: these are the four pillars which supported Pauline Jaricot during the second part of her life marked by ingratitude, suffering, indifference and misery. We can add a few friendships that never wavered, as well as the support of the holy Curé of Ars, Jean-Marie Vianney.

What was the spirituality of the future Blessed Pauline Jaricot?