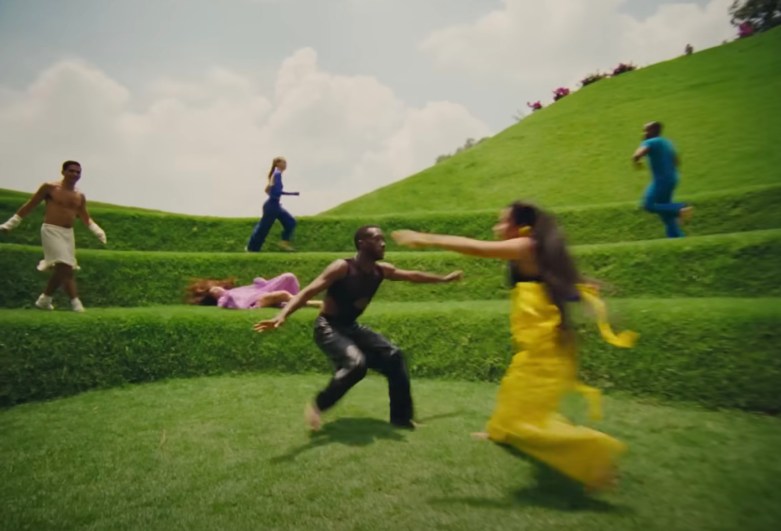 The video of Elton John’s collaboration with Britney Spears that came out the last week of September is very special in several ways. First and foremost, this is the former queen of pop’s return to music after being under the tutelage of her father for more than 10 years. The second is that this is a reinterpretation of one of the best songs of all time, Tiny Dancer, by Elton John. The third, the video was recorded in CDMX by the Ukrainian director Tanu Muiño, who has become famous thanks to her work with Harry Styles in the video As it Las, Lizzo with Rumors and Lil Nos with Montero. Some of the locations are the typical ones that all artists visit when they come to the city and that are undoubtedly an essential part of what this city represents: Casa Luis Barragán and Cuadra San Cristóbal, Quetzalcóatl’s Nest, Agustín Hernández Architecture Workshop and the School of Folkloric Ballet of Amalia Hernández.

But the fourth and most exciting reason why this video is spectacular is that everyone involved in making it real is Mexican. Makeup was done by Adrian Gonzalezthe hairstyle was by Erich Clemenz and styling by Jocelyn Coronawho was responsible for really putting the name of Mexico on high and used only Mexican designers to create these colorful and mesmerizing looks.

So we talked with her to find out a little more about her work, her history, what it was like to work on this project and the fashion trends that she currently lives and in which we will soon see ourselves immersed.

Tell us a little about yourself, how did you start in the fashion industry? Where does your love for fashion come from? What is your first symbolic memory with her?

My first beginnings with the industry They come from my parents. My paternal grandfather was a tailor and he taught my father when he was a boy. And on my mother’s side, she and all my aunts were seamstresses and work in a factory in Santa Cruz Meyehualco.

My oldest memory related to fashion comes from my grandfather who brought me paper dolls that They came with several changes of clothes which you cut out and you could change them. I spent hours changing them. Outside of that, as a child, I never really paid attention to fashion. I think my taste began more as a teenager, although it was unconscious. I didn’t know I wanted to study fashion until college, when I switched from graphic design to fashion.

Even when I started studying fashion I had no idea about the world of styling. I wanted to be a designer. It was until almost leaving the race when several colleagues asked me for help to put together the looks of their collections. Somehow information leaked out that I was doing “styling” and before leaving the race they started contacting me to do styling for some small brands and publishers. It was right there that I decided to go more towards styling.

What elements or characteristics constantly permeate your work?

I find it difficult to define my work. I think I have a very clean and minimal aesthetic. I generally use only the items that are required. I really like the balance between pieces statement and simplicity. Most of my work is with Mexican designers or I really like to experiment with custom made things and second hand clothes.

I am a person very focused on the creative direction of any project. From the concept to the lighting I like to have an opinion in the whole process for the result of the photo.

Tell us about this incredible project. How does it arise?

This project came about through Instagram. One day they wrote to my personal account so I didn’t realize until several days later that they had been contacting me for a job and they had tried to locate me from the USA. When we finally got in touch, they told me they wanted to offer me a job. I couldn’t believe when I had a talk with them that it was for Britney Spears and Elton John.

What was the inspiration and mood board for the styling? Why monochromatic looks? Was there inspiration from the locations as well?

Though the project had been planned for weeks, the information about the project and visualization came to me very late. I was given the information on the locations on Saturday afternoon and the costume test was already the arts (something very normal in productions). So I had a day and a half to create the mood board and get the clothes.

The locations were key to defining the costumes since each location was an important architectural space in Mexico City and they were visually very impressive. So the clothes had to stand out, coexist with the space and tell a story. It also had to be clothing that worked particularly for dance.

The colors of the pieces were very important for each location. For example, the color yellow and blue was very important to the director as it was a tribute to the Ukraine where she comes from. The Lila dress was chosen because of the colors of the walls of Barragán etc. Therefore, not only styling was required, but I also had the opportunity to do costume design in some shots such as the lilac purple dress. the girl’s uniform.

My proposal and criteria for choosing pieces It was that they told a story and had a more poetic and fresh feeling than a fashion approach.

I see that all the pieces are from Mexican designers. What are they and what was your criteria for choosing them?

I really like working with designers Mexicans because I think there is a lot of talent new in Mexico and I think it is very important to make it known to other countries the quality, creativity and proposal that exists here.

Once the defined mood board and colors, I began to investigate brands that coexist with this aesthetic. I wanted brands with young and new designers who had a lot of proposals. Honestly, there were many to choose from, although finally the designers I chose were:

Each of those brands has a contemporary aesthetic. It is talent that does not go unnoticed, I have followed their work and it seems to me that each of them has managed to capture the essence of Mexican fashion in different styles.

I know what the productions are like and the amount of clothes you have to take out to have a backup. How many looks did you put together and how many were used in the end?

I only had one day to get the clothes, so this time I couldn’t put together previous looks. I only had the idea in my head, the shapes and feeling of the looks and I put them together in the test according to each vignette. I had like 6 racks of clothes that I was separating by colors, sizes and location.

The dress rehearsal was very easy. The director and the creative producer had a lot of confidence in my work. I submitted 3 or 4 looks (although I had a lot more clothes) but everything was approved very quickly. Everyone was fascinated by the designers and their talent.

At the end of the test they congratulated me because they said that the director was very strict and generally rejected the stylists she worked with, but fortunately my experience was quite positive.

What constitutes a great look for you?

For me it relies a lot on people’s personality and confidence. There are times when just a t-shirt and pants can look cooler than something elaborate and forced. It all depends on how you use it and the attitude you give them.

What trend or piece of clothing would you erase forever from the history of fashion and the universal collective?

I think it would not eliminate any trend or piece. There are things that I swore that I would never like but that I have seen them on catwalks or in people on the street that give them another context that makes me like them. It’s what I like about fashion, which is totally reinterpretative, cyclical and if you combine it differently you can create millions of possibilities. So now it would be impossible for me to say anything because I know that I could probably like it in two years.

What impact would you like your work to have on us?

I don’t know if impact would be the word I would use but I would just like to continue giving my vision and that of my creative partners in a global way.

We chatted with Jocelyn Corona, the stylist behind the video for “Hold Me Closer” by Elton John and Britney Spears