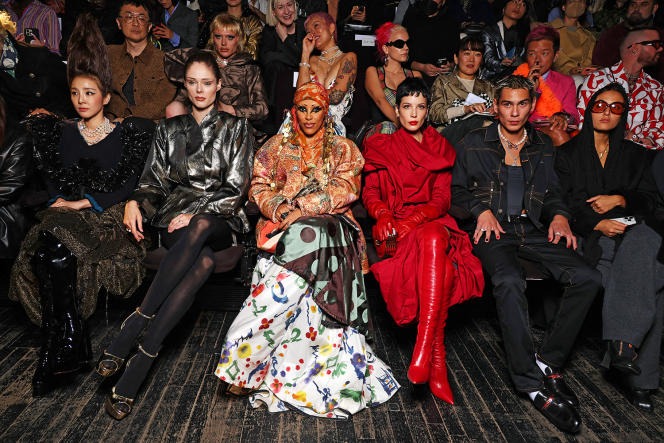 What is fashion? What is a parade for? Is beauty still the subject? Is elegance a totally old-fashioned value? And the clothes in all this? Are they still important? More or less than the images that turn on Instagram? More or less than the people settled in front row ? Fashion week ended a few days ago and leaves behind a pile of questions and a stack of striking souvenir photos. This was taken during the Andreas Kronthaler fashion show for Vivienne Westwood, at the Gaîté Lyrique.

Read also: Roger Federer, the man who didn’t miss his life, maybe that’s a detail for you…

What do we see in this image? A tangle of stars of all kinds amply dressed or accessorized by the inviting brand. On the far left of this frontrow, note, to begin with, the presence of the so-called Dara (9.8 million followers on Instagram). Former member of K-pop group 2NE1, the South Korean star notably sports, here, a Vivienne Westwood pearl necklace that goes around her neck three times, says “necklace”. This is how specialists call pearl necklaces longer than 114 centimeters.

Read also: David Beckham in single file, maybe that’s a detail for you…

Two places further, Doja Cat (24.4 million followers on Instagram) also displays a spectacular piece of goldsmithery. In fact, consistent with her entire outfit, the rapper wears an adornment inspired by pieces of Berber origin historically made by artisans in southern Morocco, especially those in the city of Tiznit. Indeed, the many golden discs falling on both sides of his face recall the work around the coins of Moroccan craftsmen who, for lack of precious materials, valued everyday objects.

To the left of Doja Cat, another singer shines brightly. Halsey (30.6 million followers on Instagram), dressed in red, wears a spectacular pair of thigh-high boots highlighting the strange fate of this shoe. Born several centuries before Jesus, this high boot was for a long time the symbol of a form of proud virility and the prerogative of the military, the only ones authorized to ride a horse. Things began to change in the 19the century with the feminization of horse riding and never ceased to be reversed… In fact, soldiers wearing these shoes are quite rare.

Alongside Doja Cat, skateboarder model influencer Evan Mock (1.1 million followers on Instagram) had also taken care of appearances. Horsebit loafers, white socks, polish, tank top, he also wore a pearl necklace signed Westwood allowing us to reopen the file… In fact, if Dara’s necklace was a jumper, what type of model is it here? A choke, 36 to 40 centimeters long? A princess, 40 to 45 centimeters? Or one morning, from 45 to 60 centimeters? Another question that fashion week leaves behind.

Vivienne Westwood guests, maybe that’s a detail for you…