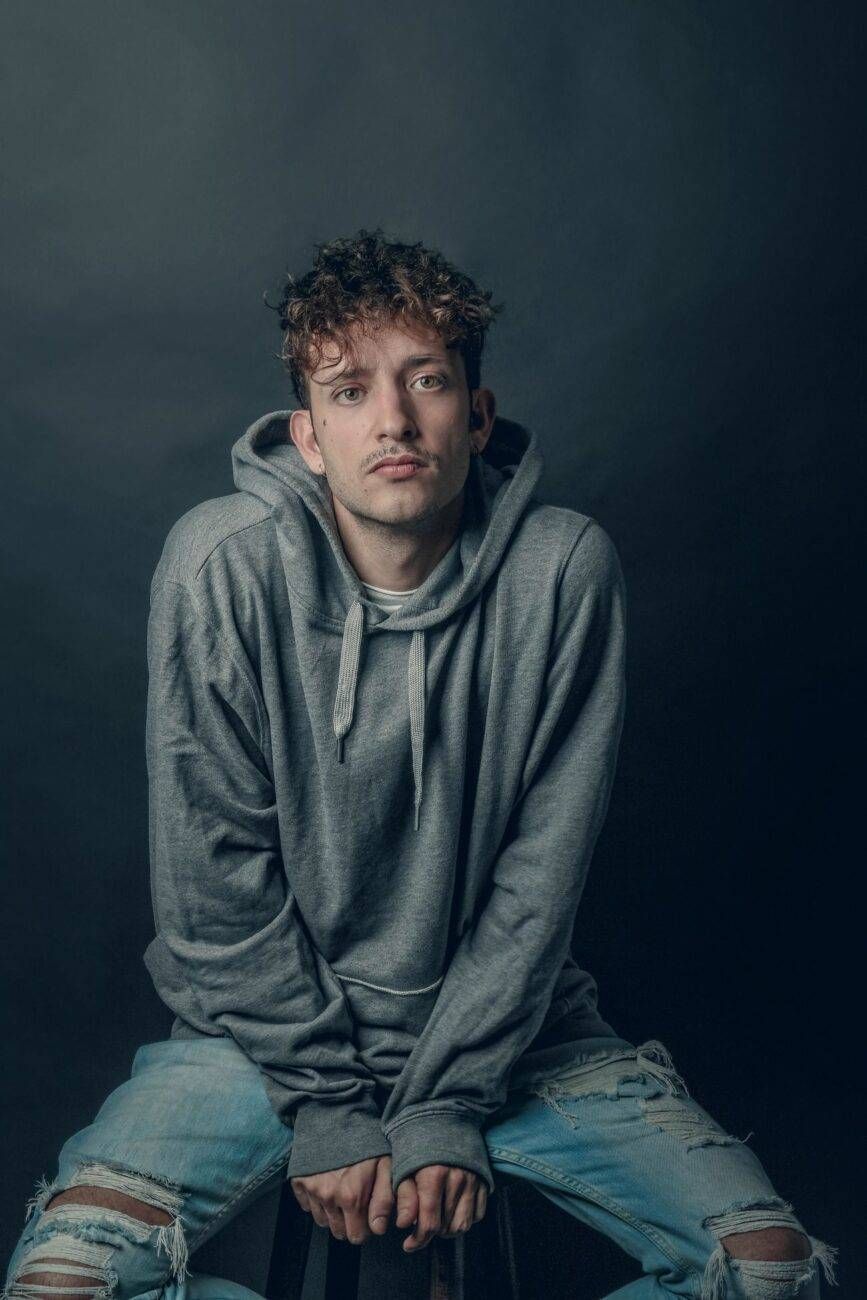 It is a spring afternoon. Barcelona woke up sunny and, surprisingly, the Gràcia neighborhood is calmer than usual. There is something in the air, an unusual tranquility that at times lets you hear in the distance what seems to be the horde of tourists exploring the most famous areas of Barcelona. On another plane, in another reality and as if out of a timeless space, he bursts into the café “La Pausa”, Vic Mirallas.

By profession a musician, but with an exploratory heart, from an early age he has given himself the pleasure of becoming what he always dreamed of: a multi-instrumentalist (voice, piano, clarinet, saxophone and guitar) and producer who, with the mix of pop, R&B, jazz, salsa, funk and urban genres, managed to give life to a more authentic and own sound. Not for nothing has he managed to have around 400,000 monthly listeners on Spotify and fans who track him around the world.

With a big smile and eyes that have seen almost everything, Vic he left his busy work routine in the recording studio to greet us. More with the humility of the greats, she gives herself completely to talk about the local scene, her years of touring with Alejandro Sanz -of whom he was a chorister and saxophonist- and his projects. Also of her collaborations with musicians like Camilo, Don Patricio, Ca7riel, I bite, Bely Basarte, Juancho Marqués, among so many others. And, of course, he gave us a little preview of what will be their first concert at Niceto Club, on May 4 in Buenos Aires.

If you had to define your music, what genre would you choose?

I don’t like to catalog myself. I know that critics and culture tend to do that, but I’m not super comfortable with labels. Sometimes they put me on urban, pop, trap… I’ve studied jazz and classical too, so I’d like my music to be talked about only as “music”. But if I had to define it, I think it would be “pop with roots.”

The path you have traveled professionally has been great. How would you say your evolution as a musician was until you found your own sound?

Working on many different aspects: I have been in classical orchestras even in wedding bands doing versions; I have accompanied a thousand artists. This ‘sideman’ experience has given me a vision of what music is like from other aspects and I think that this also gives me flexibility when it comes to being able to create according to the moment I’m in, and bring out a different style of music.

In what context was your last album conceived?

“Crosswords” It arises from the quarantine experience with my ex-partner. Locked in a small house, existential dramas arose. In my case it was that there were no more concerts with Alejandro Sanz) and I had to think about how to make a living somehow. And so I decided to make a record about the dramas that came to me organically. The process began in full confinement, in the middle of the action until they began to let us go out more and I went to my friends’ house to record. It was all very easy and organic because we really wanted to work.

What did you learn from touring with Alejandro Sanz?

Especially when it was a tour. I started super young with him, for seven years…Then the energy of rehearsing every day, the live bands, directing a band, arranging…I had a lot of responsibility: I went from never having toured in my life to touring in the first division . Being able to see all this made me realize that he had to work on my own. It was a difficult decision to leave him, but it has been for the best.

Do you feel more comfortable in this facet of ‘frontman’?

It is more comfortable not being a ‘frontman’. It took me a long time to get comfortable with this. When you’re behind, you don’t have to show your face. Even after concerts, talking to people… Sometimes I get a bit lazy. When I was a ‘sideman’ I took it as a job, as a musician-producer and I thought it would be what I would do all my life.

When you were a boy you wanted to be a footballer, how did you make the change to wanting to dedicate yourself completely to music?

What artists have influenced you?

John Meyer has changed my vision of pop music done right. Before him, I listened to classical or jazz; and suddenly I began to discover the beauty in pop thanks to him and other artists who have inspired me as well. In my teens he studied classical but listened to pop. In general, classical students prefer to listen to techno or things that have nothing to do with it. Jamie Cullum and Jacob Collier They have influenced me a lot. I currently like Lizzy McAlpine and Naftabut I’m already working on the next thing and I’m really into my music too.

And what are we going to hear in your new project?

It will be released on May 6, when it is in Argentina. It will be a song that talks about the pressure that artists have when we are in big record companies, that we have to deal with requests to make hits and opinions. “Erre que erre” it will be called, because it precisely speaks of having perseverance and insistence.

Don’t you think that in the scene in general everyone does a bit of the “commercial” thing because that’s what people want to hear?

It is clear that there is a formula that works and the record companies know it. They also tend to promote artists that they know are going to succeed and not people who are just starting out and are authentic to their sound, who have a more interesting proposition. I think that in Argentina there is a much bigger place for independent music than here in Spain. And it also has a very good reception from the public. Things come out with very good artistic proposals, and at least here in Barcelona it doesn’t happen. They don’t give oxygen for people to go out and put together their authentic proposal.

You have worked with Camilo, Ca7riel, Don Patricio, among many others… what do you think of the collaborations? Which one did you enjoy the most so far?

Some of you think that they will give you great exposure but then sometimes it is not the right thing to do since it gives you exposure because you are collaborating “with”… it does not give you some recognition for yourself. But I have always liked to compose for an agent and I adapt. On a musical level, the one I liked and admired the most is CA7RIEL. I admire him a lot as a musician and it was very easy to collaborate with him.

How was working with him (Ca7riel)?

I have been friends with “Big Menu” (Nathy Peluso’s former band) for a long time, and had been working with them in the studio. I heard the theme McFly by Ca7riel and I thought that his style suited me a lot for what we had put together with Big Menu. We started following each other on social networks and I took the opportunity to offer him the topic, and he loved it. In fact, I don’t know him personally yet. We recorded remotely but he’s going to join Niceto.

What will your followers find in the Argentina show?

It will be quite a surprise, even for me. I will play with that band for the first time. They are all excellent musicians but we’ll see what comes up there. My repertoire is not easy, sometimes there are many arrangements… But I have no doubt that everything will turn out well. I still don’t know very well, but I will invite all my friends from Buenos Aires to come up and sing: I bite, Benja Amadeo, Femigangsta, Ca7riel and Camilu.

Do you have expectations about that night?

It is a risky and ambitious start for my first time in Argentina. If I manage to sell out, it is a sign that I have to continue discovering Argentina. The idea is to return at the end of the year, and also explore Mexico and Peru.

What is your opinion about the new rules of the game in music? That is, release singles to have more views on the platforms…
You are free to release your music however you want. It is true that today the single is given more importance than the album. The positive part is that you can work a lot on a single and that people give it a lot of attention, which it really deserves after so much effort in the studio.

Does this condition the artists?
Many people take advantage and make many singles, to release “content” and that it becomes viral. In that niche there are often songs that are artistically null, with denigrating lyrics…sexist, movements that are cataloged as “the best music” because it is the most listened to…and that can be a bit of a problem. The algorithm does not always show the best, it makes everyone hear the same thing.

And does it affect you?
If I compare myself to people who “hit it” by doing substandard things, it’s easy to get discouraged. I can’t help but wonder: ‘What am I doing in the industry if no one listens to me?’ This happens sometimes, but sometimes they do listen to you. You feel invalid when they don’t listen to you and valid when they do. That is something that must be learned to separate, between the music person. In the end, I am first a person than a musician.

How do you get along with that dissociation between the ‘Vic person’ and the ‘Vic musician’?Before bad and now I start to see myself better. I have had the strength to separate. Expectations are dangerous. I have always been very clear about what I wanted and the moment I wanted has not yet come. But I follow a path that I think is the right one, little by little and without stopping working.

What is that place you say you haven’t reached yet?I don’t see myself in stadiums or playing in front of thousands of people. I see myself in smaller places where there is good sound, better music appreciation and a real connection with the public. Not in places where it’s full of people screaming.

How did it happen to C. Tangana?
I’ve been told that you can’t hear anything at his concerts from the screams of the fans (laughs). He is a true strong inspiration at the level that has managed to bring together Spanish music with urban music. What Rosalia, but currently ‘Pucho’ on an aesthetic level is betting on something strong and interesting. I like and I am hooked on their songs.

Is your success beneficial to other artists?
I think it’s a hope that people like Rosalía and C.Tangana make known what can be done from Spain and give other musicians more exposure.

Who do you dream of doing a collab with?
With George Drexler, something very nice could come out. I hope I get the chance.

Vic Mirallas: “In Argentina there is a much bigger place for independent music than in Spain”