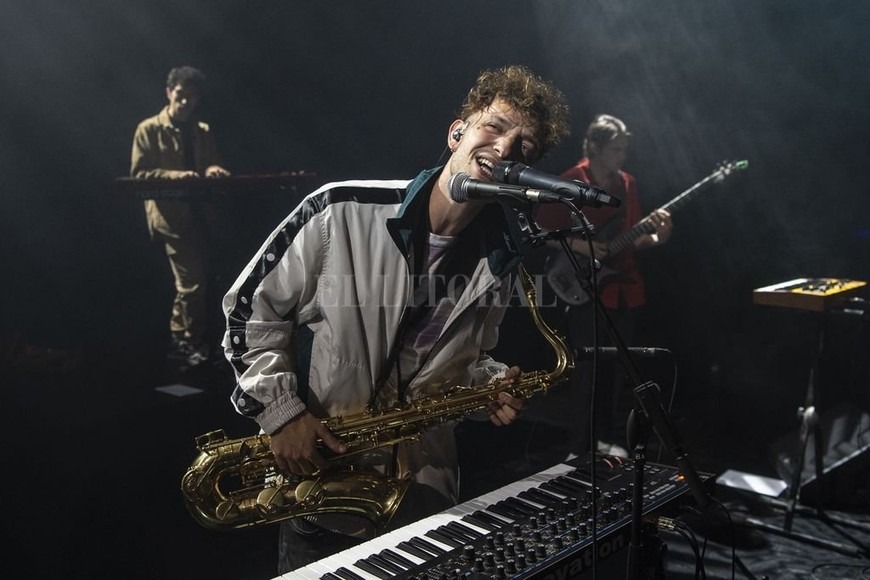 Victor Mirallas is a 28-year-old Spanish musician who will arrive for the first time as a soloist in Argentina on May 4 (Niceto). He is considered a Hispanic-American “promise”, since his training at Berklee and participation in Alejandro Sanz’s band dangled in his youth, not to mention his own style and versatility in mastering instruments. In dialogue with El Litoral, the artist born in Barcelona, ​​from an Andalusian family “closer to the Catalan rumba than to flamenco”, expresses surprise at the impact of his visit to the country with his proposal, admiration for the work of Ca7riel and Nathy Peluso and the conceptual frameworks of her latest album, “Crucidramas” (2021, Warner Music).

The interview ends and Vic settles the content in an exercise of self-definition. “I would say that I am a musician who has a cultural claim for today’s society”. Before that, long before, the family occupied a key place in his artistic makeup. Vic’s childhood home had a distinctive ambient sound, intertwining Johann Sebastian Bach and the practice of his parents, both classical musicians. La Vella Dixieland was also heard, he recalls. At that time, his sister practiced the piano all day, “Russian school style”. While he was growing up. Listening, observing, memorizing. “My mother told me that when I was little, she would make a note and I would copy it. They saw that they had a melodic sensitivity and reinforced it with games. For example, she covered my face and played notes on the piano… and I had to guess them. It is something that was super fun for me and, at the same time, it was serious”.

For Vic it was not difficult to know that his path was paved by harmony, melody and rhythm. This is how he came, first, to the classical piano and clarinet. Later, he entered the Superior School of Music of Catalonia. But she felt that it was not for him. Between studying for hours and interpreting an instrument and an ancient repertoire, or delving deeper into composition, he chose the latter. Thus he arrived at the Berklee College of Music. From the Mirallas that he entered to the one that he left, years later, there was great growth. “I met people from many different cultures. You mix your culture with theirs and, at the same time, with Anglo-Saxon jazz. It was also important to realize that my thing is the mix”.

There, too, the horizon was opening up for the incipient singer-songwriter me: producers, collaborations and the possibility of “signing up for a band”. That’s how it happened feat with the Peruvian musician Nicole Zignago, who adds her charm to “Look back”. “I was very clear about the timbre of voice that I imagined entering the second verse. It was going to be Evaluna, who couldn’t, so we recorded it remotely with another friend”. Speaking of producers, another guest on “Crucidramas” is Carlos Ares, on the last song they did for the album: “How good I saw you”. “Carlos sings and writes lyrics in a very good way. He is one of the people I most enjoy working with at the production level. It is a song against the current of the album; we did it in a week and it was a very vivid feeling for me”.

Courtesy of the Press All the time I’m improvising in my head, admits Mirallas about his method of composition.

“All the time I’m improvising in my head,” admits Mirallas about his composition method. Photo: Gentileza Prensa

There is something about Argentine music that captivates Vic Mirallas. For those who record collaborations with Ca7riel and Benja Amadeo, in addition to publicly highlighting Nathy Peluso, Wos, Knowing Russia, Nafta and Carlota Urdiales, there is an artistic gene. “I think they go with the freshest mind when it comes to composing; you have fewer snags. It is the art of expressing for the sake of expressing without the need to get into a kind of collision, opera or sound that we are used to”. El Kuelgue (“I liked it a lot”) comes off the tip of his tongue. I change a hologram figurine: Illya Kuryaki and the Valderramas. The promise, as they call it, take note.

“You don’t love me” is the name of the song that the Spanish singer-songwriter chose to link with Ca7riel. As it became more groovy, Mirallas felt it was ideal for recording by the Big Menu musicians, former accompanists of Peluso. That’s where the contact with Ca7riel came from. “Among musicians, his new album has been shot a lot”, Vic prefaces. “He produced a type of song and production, typical of someone who studied and who knows. Many people try to translate it into Spanish music, but it hasn’t caught on the way he has in Argentina. I also think that there the public is more open to new proposals”. Regarding his colleague, he says: “I knew him and saw that he was following me on Instagram. So I threw the rod a little to see if he would join. He loved the theme, it was super organic and fast. He did the part for him, he wrote it, and he was always open to change.”

“Crosswords” was released in the cyber seas on November 12, 2021. 121121, play it. It’s clearly an album pandemic, where each piece “is a different movie”. In the midst of the “break”, the uncertainty and “expectations that are not met”, a couple dissolved. “You have a lot of time and you start to look inside yourself. It didn’t come naturally to me to write happy songs. They are problems that I consider, to which I do not finish finding a solution”.

Crosswords I don’t understand, as the work was going to be called before finding its linguistic standard, presents a great divergence from the Catalan’s debut feature. After “Aquí y asi” (2017), produced by Adri González, the author goes one step further. He resounds, in an imaginary radio, “My loneliness and me.” “Being a more personal diary, I got into all the productions. People came according to the instruments and sounds, but I had the session on my computer. It’s a big difference having the power of your songs and depending on someone else to produce you. That creative freedom makes it more me, and it has also gone better for me”.

“For me, it’s everything,” Vic says of improv. “He was very comfortable when he was doing jazz and scat standards. In the moment it can make you angry, but when you start to get in there and do it right, going through the chords and studying the theory…”, he finishes with a smile that eats his face and shoots the perfect word into his mind. “All day I am improvising in my head, looking for chords and melodies. I think I practice it even when I sleep”, now he gives a sound to the grimace that he pulled seconds ago, and becomes a bit serious: “the lyrics cost me more, I have to make more sense of it”. Likewise, “when I go out to party with my friends, we have some rooster battles, we even dare to put down bases and rap. Sometimes something comes out that makes sense, but I do it as a joke. I think that there we are working with another type of brain; I guess it’s reading a lot and listening to a lot of rap.”

The status of permanent impro comes from being a multi-instrumentalist. Saxophone, piano, clarinet, guitar and, of course, voice. “When I play them and improvise all the time in my head, I get quite saxophonistic melodic lines. First, I’m thinking about the sax positions; then, I adapt a letter. How are such lines? What distinguishes them from others? “It’s different: you have to think about it more when it comes out of an instrument that is played. For example, Ca7riel’s song is something very saxophonistic. The chorus goes ta-ti-ri-ti-ra-rá ta-pa-ti-ti ta-pa-ta-ta ta-pa-ti-ti. I based on the scat of the moment to make the sound in the lyrics. On the other hand, if you start a verse with the guitar, the lyrics come out very easily… but it’s also easy for it to sound like others. In the end, it’s the variation that makes the richness, and I don’t think there’s just one way to do it.” improvising is thinkingBuscaglia already said.

The second song on “Crucidramas” is “Todo lo que Tengo”, with the participation of Sevillian Juancho Marqués. Previously there were other musical hugs between the two, such as “Natural”, “When I’m not here” and “If I were in love”. “He is one of the best lyricists”, confesses Vic, “he has the ability to phonetically adapt the lyrics to what you had in mind. He makes them sound suggestive but, at the same time, without saying exactly what he wants the public to hear”. The base has a flamenco air (aflamenco), with some Spanish guitars recorded by Pau Figueras, a member of Ale Sanz’s band.

Precisely, the Sanz factor is key in the solidification of the multifaceted Mirallas. In addition to having listened to him a lot as a child, he was part of his band for six years, directing the choirs and the horn section. “At first they told me that I had to be singing everything Ale sang, paying attention to her hand by the time she took out the microphone. Put more into it and, at the same time, look for a voice that wasn’t 100% mine, so that it would stick. I have been very aware of the type of melodies and fabrics that he made. In the search for his voice with mine, for more air, and that has given me many boards when it comes to doing choirs”.

“Chan”, as Paco de Lucía nicknamed the author of “Corazón partío”, also marked Vic as the greatest do: with advice. “I remember I taught him ‘Todos fue’ on the plane. He said to me: ‘Wow, it sounds like you want to show everything you know in a song.’ He seemed to her too much production and information. I kept thinking ‘maybe you’re right’. From then on I began to empty more elements, although sometimes I lose the pot and I put a lot… But having this awareness of less-is-more has helped me a lot”.