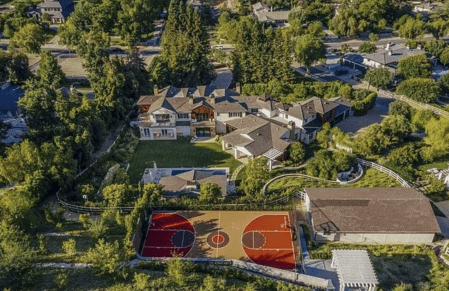 Only a year has taken Madonna to put up for sale the mansion that she bought from fellow artist The Weeknd for 18 million euros. However, the immortal interpreter of Like a Virgin intends a speculative operation of substance by raising the price by just over six million. It is located in Hidden Hills, an exclusive Californian municipality – the average annual salary is 190,000 euros – about 65 km from Los Angeles, the county to which it belongs. Several members of the Jenner-Kardashian clan, Jessica Simpson, Ozzy Osbourne and some elite athletes have properties there.

The mansion covers 1,150 m2 of surface, nine rooms with as many complete bathrooms and a master suite with a dressing room of the proportions of a boutique

The mansion covers 1,150 m2 of floor space, nine bedrooms and as many full bathrooms (the master suite has a boutique dressing room, steam shower and stone bathroom), a wall of two-story windows, a reception room with an interior bar and outside, formal dining room with fireplace, wine cellar, double island chef’s kitchen and music room. In addition, cinema room, gym and dance or pilates studio.

There’s a garage converted into a nightclub, a saltwater pool, a ten-person spa, and a pro-size basketball court.

The attached guest house, also included, offers two more bedrooms, as many bathrooms and a full kitchen. And if the main mansion is luxurious, its surroundings are not far behind: surrounded by redwoods and lush gardens, there is an outdoor kitchen, a garage converted into a nightclub, a saltwater pool infinity –with a cabin, naturally–, a spa for ten people and a professional-size basketball court.

Although Madonna, 63, is not going through her best moment of fame – her most recent aesthetic tweaks have been acidly criticized on the networks – she can boast of having sold more than 300 million records, accumulating seven Grammy awards plus 21 nominations and a fortune. around 700 million euros. A mother of six, she owns a row house on Manhattan’s Upper East Side, a massive horse farm in the Hamptons, and an 18th-century home near Lisbon.