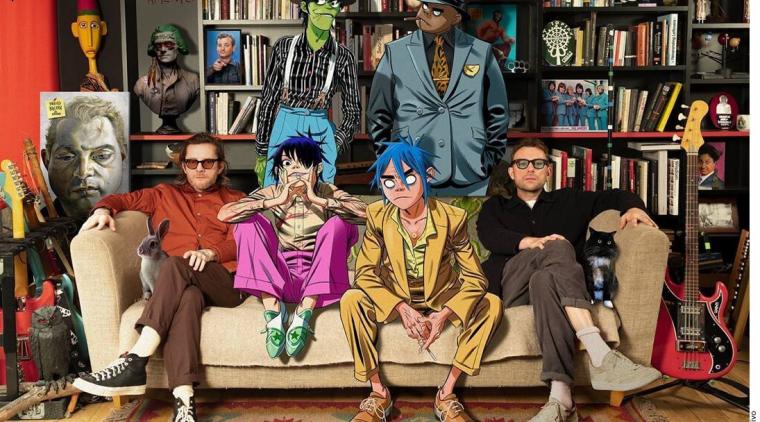 More than three years have passed since the first and only time that Damon Albarn’s band performed in Colombia. This was within the framework of the Festival Estéreo Picnic 2018. They were among the most sought-after artists on that bill and their concert attested to this, amid the usual festival rains. With the drops already on their faces, people made themselves felt and a simple “Hello. Is anyone there? It was enough for the public to explode with emotion.

The concert began with the song M1 A1 and on the screen they appeared 2-D, Murdoc, Noodle, and Russell. In total they sang 19 songs, going from their new songs to the classics, but giving importance to the songs from their Humanz album. Neither the rain nor the mud prevented an epic day from being experienced, and it is precisely those good feelings that are expected to be experienced again at the concert that will take place in Bogotá on May 12.

Gorillaz returns to the country as part of its tour to celebrate its 20-year history. The concert, which will have LosPetitFellas as opening acts, promises to be a meeting to remember for fans who have known how to vibrate with this band that has redefined the musical aesthetics of the 21st century, being faithful to its creative freedom at all times.

The tour of the band does not bear any name. In the different countries where it will be presented, it has been given the name of Gorillaz Live, but that matters little when it is known that they will go out with everything to remember their most popular songs.

The list of themes will recall, precisely, those of their first album, but will take a tour of the 20 years of the band. There are 21 songs in total and, except for some internal decision, there will be no variations from one country to another.

This band made up of Damon Albarn, Jamie Hewlett, Remi Kabaka Jr. and the beloved 2-D, Murdoc, Niccals, Russel Hobbs and Noodle, has been characterized by its members’ constant ability to explore new sounds and come up with new ways to spread your music. More than a band, Gorillaz has been presented as an experience in which music is just an excuse to unleash creativity.

In 1998, Albarn was sharing an apartment with Jamie Hewlett, the illustrator who created Tank Girl. One afternoon they were watching videos on MTV and got tired of the visual concept that most of them explored. Given their dissatisfaction, they decided to get to work and thus Gorillaz was born, an idea that sought to break all the aesthetics of the music industry at the time.

Two decades of this have placed them among the most important groups so far this century and one of the most chameleonic. His debut album left important musical anthems for this generation with songs like the aforementioned Clint Eastwood either 19-2000; his subsequent work has allowed us to see an amazing evolution in his ideals. Six albums support them: Demon Days (2005), Plastic Beach (2010), The Fall (2011), Humanz (2017), The Now Now (2018) and Song Machine, Season One: Strange Timez (2020).

“Colombia, what a beautiful country”, said Damon Albarn in that 2018. That night the unconditional love of the Colombian public towards the band was confirmed. A love that will resurface on the night of this May 12, at the Movistar Arena.

The Spanish singer Sheila Blanco will perform in Bogotá starting this Wednesday: “We must vindicate the feminine in history”
Confirmed the return of Guns N’ Roses to Colombia