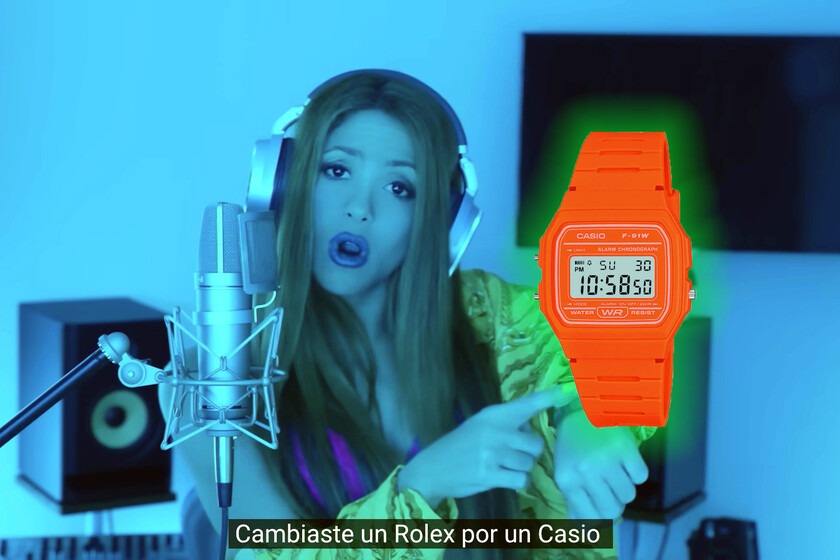 “You traded your Rolex for a Casio”, says Shakira in her last song with BZRP. The letter, which is a true example of a shoot in which the Colombian artist shoots several darts at her ex-partner, Gerard Piqué, refers to derogatory way to the Japanese watch brand, a mention that has not gone unnoticed on social media.

It is that certain excerpts from Shakira’s latest musical material, which has exceeded 30 million views on YouTube, are giving everyone talk. Since her separation after an alleged infidelity by the footballer, up to the Treasury debt and comparisons between Casio and Rolex.

If they compare you to a Casio, that’s okay

As is the case in almost all debate arenas, the comparison between Casio and Rolex has become a inexhaustible source of messages on Twitterwith a large number of users (including accounts from various companies that took advantage of the occasion) defending the qualities of the watches of the Japanese brand.

“I have not seen any Rolex multiply you or add you.” “Shakira will excuse me, but I have not seen a Rolex with little toys. Point for the Casios”. “CASIO (watches and keyboards) and (calculators) are for life 😉”. These are some of the messages that can be found on the social network, the latter being from Casio Educación’s own account.

The Casio and Twingo marketing team after listening to Shakira’s session with Bizarrap pic.twitter.com/DtIqAKsr1S

Shakira: “You changed a Rolex for a Casio”

The owner of Casio: pic.twitter.com/pSfLe0tdl4

The guy who has a Twingo and a Casio after listening to the Bizarrap session with Shakira. pic.twitter.com/WmooelPOUK

The truth is that, although these are not super-luxury products, they just went up in priceCasio watches have managed to build a worldwide reputation that only a few brands have. And we do not say it. Just look around us. Possibly, we or our parents once had a watch of this brand.

The legendary Casio F-91W has more than 30 years of history and, despite the fact that smart watches are here to stay, it continues to be an object desired by millions of people. But the Casio phenomenon goes far beyond this cheap but robust option. What would you say if people who can afford any Rolex choose a Casio?

We do not try to advertise the brand, but this phenomenon is quite striking and we cannot let it go. As GQ account, celebrities and high profile people like Bill Murray, Ed Sheeran, Jack Nicholson, Kristen Stewart, Barack Obama, Ryan Gosling and Bill Gates have chosen Casio watches with prices not exceeding double figures.

What is the origin, then, of this brand that has managed to win over people from different socioeconomic strata? As the company itself explains on its corporate page, Casio was born under the name of Kashio Seisakujo. It was founded in Tokyo in 1946 by a turner who made pots, pans and bicycle generator lamps for a third party and wanted to set up his own business.

The company’s first major product was not a watch or anything like that. It was a pipe called a Yubiwa that was basically a ring that held a cigarette and allowed the smoker to keep his hands free. The orders began to grow and Tadao Kashio, the founder of Kashio Seisakujo, decided to use the profits from this product to develop a much more sophisticated product.

After several years of work, in 1954, Kashio Seisakujo presented a prototype of an all-electric compact calculator, an important precedent for the commercial launch in 1957 of the world’s first compact electric calculator. This latest product was a real success, making offices more efficient and saving staff costs.

In 1957, Kashio Seisakujo changed its name to Casio Computer Co., Ltd. In the years that followed, the company launched a strong investment in development and research, as well as in its own factories to manufacture and launch increasingly advanced models of calculators. Growth seemed inevitable.

Casio calculators began to be recognized for their quality and high technology, which led the Japanese manufacturer to internationalize its business, opening offices in Zurich, Hamburg and New York. In 1970, Casio decided to list its company on the Tokyo Stock Exchange and convert its stake into shares.

After the success achieved in the calculator market, Casio ventured into a new market and launched in 1974 the world’s first electronic watch equipped with an automatic calendar. Let’s remember that this was an era dominated by quartz mechanical watches and Kashio took a long shot with that attempt.

The movement was completely successful and the watch quickly became a success. Thus, this product began to mark one of the hallmarks of the new Casio. Other products such as handheld calculators, typewriters, fax systems, and musical instruments came along over the years.


One of many Casio calculator watches

What do you do if you are a company that makes very good watches and very good calculators? Casio’s answer was simple: make a calculator watch. The new product hit the market in 1980 accompanied by a watch that also incorporated games, and three years later the G-SHOCK line of shock-resistant watches debuted.


Recent models of the G-SHOCK family

Over the years, the company continued to innovate, being a pioneer in many situations. In 1999, for example, it introduced the SATELLITE NAVI, the world’s first GPS watch, a watch with a built-in camera (2000) and a credit card-sized LCD digital camera.

Today, Casio has a wide catalog that includes watches from $23, like the F105W, to alternatives. more opulent than $4,000, such as the MRG-B5000 from the G-SHOCK range. It also retains its business of musical instruments, calculators, and medical products. Of course, all the brand’s products have something in common: their proven reputation.

There’s nothing wrong with being compared to a Casio: how its watches made it a glorious brand