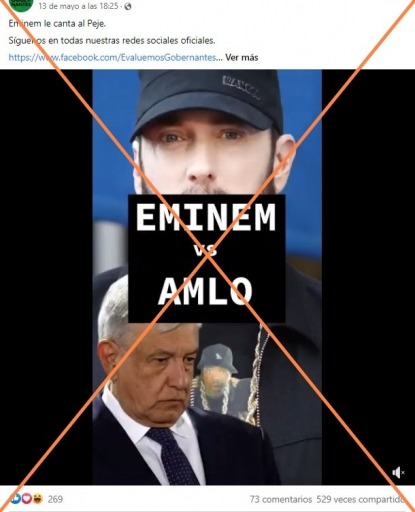 Did the American rapper Eminem dedicate a song to the president of Mexico, Andrés Manuel López Obrador? Social network users have shared more than 2,000 times a video in which a voice very similar to that of the singer calls the president “old man” and “false messiah”. But there is no record of such a release and the musical base has been used by other artists since 2020. In addition, there is artificial intelligence software that imitates the voice of celebrities, such as Eminem, with which users can create songs and dedicate them to their politicians. favourites. AFP Factual tried one of them and obtained a result identical to the one circulating on networks.

“Eminem sings to Peje”He says a Facebook post referring to one of the president’s popular nicknames, along with a video that includes audio and images of the rapper and López Obrador.

In the viralized recording, which includes subtitles, a voice similar to that of Eminem say, in English: “Do you know what is happening in Mexico? They are being governed by this old man (…) The guy is a m”·$%&#a who loves drug traffickers. He would rather set them free, than deal with a free press.”.

And adds: “And while the country is falling apart, he has a daily conference where he just rambles and rambles. Every morning for two hours, he goes out and preaches hate. That’s your m”·$%&o” head of state.

However, a review in the official accounts of Facebook, Twitter, Instagram Y Youtube of the rapper did not return any entries with a song similar to the one that has gone viral. Traces at the Wayback Machine (one, two, 3, 4) and Archive (one, two, 3, 4), platforms that allow versions of websites and social media posts to be saved even after they have been deleted, showed no matches.

AFP Factual consulted Eminem’s record label, but until the time of publication of this note, they had not received a response.

Music by other artists

Using the tool Shazamwhich allows the name of the songs to be identified through their sound, the music of the viral video was located in a piece called “No7ion”, by the musician True Definition, available on his YouTube channel. Youtube since August 2021. This song does not have Eminem’s voice or references to López Obrador, but uses the same musical base as the sequence broadcast on networks. 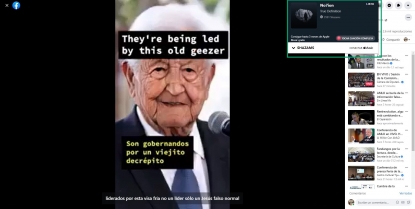 A Google search of the artist and song names led to an entry on Chordify, a platform that recognizes the chords of musical pieces. This website led to a video on YouTube on December 9, 2020, which only contains the musical background used in the viral video, but without any voice.

The sequence is found on the channel of a music production company called Taktikal, which sells tracks for rap songs, including the one used in the video of the alleged topic about López Obrador. The music background can be downloaded for free from the music company’s website.

AFP looked to see if the song could be a “deepfake”, a term used to describe fake content, generated by artificial intelligence, that presents fictitious events that appear to be real. For example, videos of people saying words that they didn’t actually say.

A search in Google with the keywords in English “Eminem deep fake voice” brought to a report newspaper article on May 21, 2021 about a software called uberduckwhich allows you to imitate the voices of artists like Kanye West and Eminem, among others, and generate songs with them.

On this platform, AFP Factual used the voice named “Eminem (pronunciation dictation)”, in English, with the same text that the artist seems to pronounce in the viral content about López Obrador. The platform produced a result similar to that of the viral video.

In the Press conference morning of May 18, 2022, Elizabeth Vilchis, in charge of the “Who’s who in the lies” section, showed the sequence broadcast on social networks and said: “This song is false and there is no such rap against AMLO”.