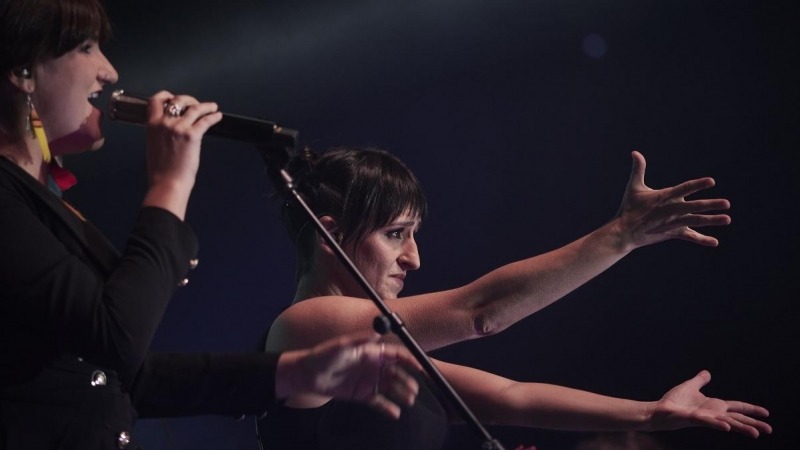 Any weekend, in any home. A little one turns up the volume, puts his hands on the speakers and enjoys. He is deaf, he cannot hear the music that is playing, but this has been his passion for as long as he can remember.

“I had my family crazy with this euphoria of mine.” Pepito Rueda is 50 years old now and, from his native Almería, he attends Público by phone. “I am very fond of music, I like to feel the sounds, the vibrations… But, In general, deaf people are not attracted to music because they do not enhance itThey don’t educate us on it,” he explains.

Discrimination, he denounces, begins from their earliest childhood, when they are deprived of this type of knowledge. And it continues throughout your life. “If you look at how technology has advanced recently, you’re crazy. But in our field we are still in the last century. Some things have improved, but resources are needed,” he remarks.

Companies like the Music For All Foundation They work to make accessibility more and more a reality in concerts and music festivals.

Among the measures put in place are not only that the space be adapted to people with mobility problems, but also the subtitling of the songs, the audio description of what happens on stage, the participation of a sign language interpreter… In addition, they lend the necessary material, such as magnetic loops -which are attached to hearing aids and cochlear implants so that the sound reaches your ears directly- or vibrating backpacks.

“It’s not just offering a service, it is normalizing, it is that everyone enjoys without pointing the finger at anyone for their different abilitiesBecause we all have different abilities. Make people understand that your reality is not the only one”. Maria, Rozalen for those who follow her for her music, it reflects the hope shared by people with disabilities who dream of enjoying culture on equal terms and who aspire to a fairer world.

Beatrice Romero She worked with deaf minors in an institute and she was a clown, but one of the real ones, one of those who study at the Circus School. They coincided and magic arose. “She really liked my songs and I loved the sign language of which she is an interpreter, which seems to me to be the most beautiful language that exists,” she explains. They combined Rozalén’s music with Bea’s dancing and took the concerts to another dimension. “The first time we were asked to act together, something very nice came out. Then, people talked about what we had caused together“explains the singer to Public.

Since then, the snowball has been growing and the sign language that Bea brings to the stage has been joined by subtitles, vibrating backpacks and a multitude of tools to make music accessible.

“Very beastly things are happening to us. People transmit very good things to us. I remember once a girl arrived with her parents. It was the first time they went to a concert in her life.”recalls Rozalén.

The theater, a reflection of the plurality that exists in society

The Neighborhood Theater in Madrid is another example of accessibility in culture. Within their programming they always include shows in which part of the cast includes people with disabilities.

They consider theater as a tool of integration. When the concern in art for inclusivity began, it was approached from a more therapeutic perspective, in which the social prevailed over the artistic. Then, that has been changing, giving greater importance to the artistic part.

Ana Belén Santiago, its artistic director, explains that from the Teatro del Barrio they do “political and social theater”. They turn the stage and the stalls into a meeting place, of reflection, of that art that stirs the entrails. “We want our stage to embody what is on the street. If there are people of color, with disabilities, on the street… then those people should also be on our stage,” he adds.

At 73 years old, Pedro Eguren is a regular at the cinemas and theaters in Madrid, the city where he lives. He is totally deaf and therefore explains how accessibility is important to him. “The audio description gives you the information that you do not perceive by sight: he describes the scenery, the sets, the movement of the actors, if they enter or leave the scene, if they point to someone, the gestures…”, he points out. “In the theater, they give you a device with headphones, like a radio, a small transistor,” he narrates.

Another of the experiences that are made available to you are the touch-tour. “We go on stage and we can touch everything: the set, the costumes of the actors, the shoes and everything that is relevant,” he explains on the other end of the phone. “And before that, we have a little meeting where they tell us everything that’s going to be in the play so we can understand everything better,” he adds.

The same thing happens in the cinema, with the only difference that the audio description is synchronized from the mobile phone with the film. “What happens is that they usually make them accessible when the fury of the film in the cinema has passed,” he says, and then makes a request: “They should play all movies with audio description the moment they are released. And in theater, the same.

Museums, sensitized, but “everything must be maintained”

Museums are a third leg of culture. At the Prado they work on accessibility on two levels: on the one hand, they make it easier for people with disabilities to come autonomously and, on the other, they seek the integration of this group, which starts working in this artistic organization as part of its staff.

“We promote positive participation in these groups that have traditionally been more excluded. We seek to encourage them to come, to contribute,” he explains to Public Santiago González D’Ambrosio, in charge of the Prado Inclusivo and Prado Social initiatives.

To do this, beyond the fact that 100% of the space that makes up the museum is accessible, they make available to users sign guides -which explain the works in sign language-, the audio description and even a Las Meninas tactile guide, which combines the macro characters and the braille text with color and relief reproductions of the different figures of the work. Also, for people with intellectual disabilities they have an easy to read guide.

One of his most adapted exhibitions is Today it’s time for the Prado, made up of tactile reproductions of emblematic works of the museum and which also provides visual information about them. “It is also a way of raising awareness among the public, of show that people with disabilities can also enjoy art“, says González D’Ambrosio. “In addition, we have opaque glasses so that everyone can get closer to the experience that a blind person can have,” he adds.

“This experience is very good, it’s super interesting, it’s of those things that you like. All life studying art and then you go and touch them. It’s great. You have a guide that explains how to play the painting: At the top right you have I don’t know what…”. At 64 years old, José Pedro González Alcón, who is totally blind, and a fan of all kinds of museums, tells Public from Madrid his experience in this regard with evident euphoria in his voice.

José Pedro, however, is critical and asks to continue taking steps forward so that people with disabilities can enjoy art under equal conditions: “There are more and more possibilities and more sensitivity. What happens? If there is something, then we have to keep updating it because things deteriorate. You have to keep everything”.

Theater and museums with blindness, concerts with deafness: this is how people with disabilities experience culture