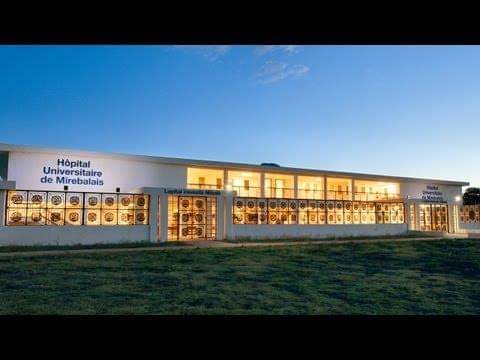 In the aftermath of the January 2010 earthquake, the main infrastructures of the metropolitan area were at ground level. The population plagued by multiple health problems did not know where to turn as the main hospitals were overwhelmed when they were not destroyed by the earthquakes.

The organization “Zanmi Lasante” which planned to build “a small community hospital 60 kilometers north of the capital” was going to respond to a requirement from the Ministry of Public Health and Population asking the management to expand its plan of construction in order to respond to the failure of the sanitary infrastructures of the metropolitan area.

“The hospital will also fill a huge void, locally and nationally, for people who previously had limited access to quality health care, as well as improve access to training for doctors, nurses and professionals. Haitian paramedics,” reported Drs. Maxi Raymonville (current executive director of Zanmi Lasante) and David Walton on the Partners in Health website in October 2012.

Two years after the earthquake, a massive 205,000 square foot, 300 bed facility had risen from the ground. In addition to being one of the largest hospital centers in the country, this hospital would lead the way in the use of renewable energy in large infrastructures. A model that should be replicated in the great national reconstruction project of the time. “This hospital […] allows us to show what we are capable of doing with renewable energy, with new technologies […] we have nearly 1,800 solar panels that will provide electricity to the entire hospital […] it’s not just a hospital but a new way of conceiving,” declared President Michel Martelly during the inauguration ceremony.

On November 6, 2012, the late Dr. Paul Farmer and Dr. Jim Yong Kim, co-founder of PIH, present at this inauguration as President of the World Bank, as well as the entire Zanmi Lasante team, realized the dream of ‘a life. In a note published on the PIH website, Dr. Paul Farmer stressed that “this hospital is the culmination of a dream that dates back a quarter of a century, and underlines our commitment to the country and the people of Haiti, which is stronger than ever after the earthquake.”

Promises that some described as “ambitious” at the time were also made. “The Mirebalais University Hospital will have 300 beds, 30 outpatient consultation rooms and 6 operating rooms. The institution will be able to receive 500 patients a day and will provide primary health care services to approximately 185,000 people living in Mirebalais and two neighboring communities.
The HUM, according to Zanmi Lasante, will offer care relating to HIV/AIDS, tuberculosis, non-communicable diseases. Prenatal care, basic primary care, dental services will also be provided. This hospital center will also offer secondary level services, such as mental health, emergency medicine, general and orthopedic surgery. The institution will make available to the community services related to women’s health, including family planning, reproductive health and comprehensive emergency obstetric care.

Those in charge of the new hospital center promised to place particular emphasis on medical training and education so that the institution could play its role as a teaching hospital. Partners In Health/Zanmi Lasante will offer medical residencies at HUM in several areas, including internal medicine, obstetrics, gynecology and surgery,” they said.

In addition, the HUM will serve as a site for clinical internships for the benefit of national nursing schools; will provide advanced training in specializations, including emergency care, neonatal intensive care and surgery”, counted Jean Pharès Jérôme in an article published by Le Nouvelliste in November 2012.

13 years after the earthquake, 11 years after its inauguration, the Mirebalais University Hospital is keeping all its promises, collecting distinctions and going beyond expectations despite the death of Dr. Paul Farmer, co-founder of Partners In Health.


This January 19, 2023, Harvard University School of Medicine plans to dedicate a day of honor to Dr. Paul Farmer. “A reception, panel, question-and-answer sessions and screening of the film ‘Bending the Arc’ are planned to mark the day.

Partners In Health Director Dr. Joia S. Mukherjee will answer questions from the audience about the life and accomplishments of Dr. Paul Farmer.

In the meantime, those responsible for this ceremony reassures that all the works of Dr. Paul Farmer through the PIH organization, including the hospital of the University of Mirebalais, are doing well. “Dr. Paul Farmer through PIH had prepared for the survival of this organization and its various achievements beyond his person. The hospitals, including the University Hospital of Mirebalais, continue to operate normally following the organization’s policy of giving quality care for everyone. Training programs have been added to the HUM in order to better articulate the work of Zanmi Lasante in relation to the needs of the population. To date, the HUM has already received more than ‘one million patient visits from all departments of Haiti since its inauguration,’ confided the management of PIH in a short communication.

Image both gloomy and contrasting in the chapter of the reconstruction of post-earthquake health infrastructure, the general hospital remains in the starting blocks and can not get its head above water.
About 17 million dollars have been invested in the construction of the Mirebalais university hospital, inaugurated 2 years after the 2010 earthquake. Started in May 2014, the HUEH construction site, which was to be handed over in June 2018, has already mobilized 83, $2 million. It is co-financed by the American Development Agency and the French Development Agency, which each gave 25 million US dollars. The Haitian State added 33.2 million to complete the budget.

The accumulated delays in the disbursement of funds from the Haitian State explain the slowness observed, said Reynold Pauyo, former director of the Technical Implementation Unit (UTE).

At the end of 2022, the French development agency had explained that there is a discrepancy between the cost planned for reconstruction in 2014 and the cost of materials in 2022. Based on this consideration, On Wednesday December 7, 2022, the French Development Agency (AFD), the US Agency for International Development (USAID), the Ministry of Economy and Finance (MEF) and the Ministry of Public Health and Population (MSPP) have signed a additional financing agreement in the amount of US$10 million for the reconstruction of the hospital of the State University of Haiti (HUEH).

In an interview with the daily Le Nouvelliste, the president of the governance commission of the Hospital of the State University of Haiti, Dr. Hans Larsen, explained that they are waiting for an expert in management hospital to initiate the necessary reforms and prepare for the transition to the new building.

The University Hospital of Mirebalais and the hospital of the State University of Haiti, two structures in the great wave of post-earthquake promises and two different destinies. One entrusted to Partners In Health and Zanmi Lasante, inaugurated two years after the earthquake which continues to function, without interruption, at full speed, and the other which the commemoration of this tragic event comes to find in full strike and without any certainty about the inauguration of its new building.