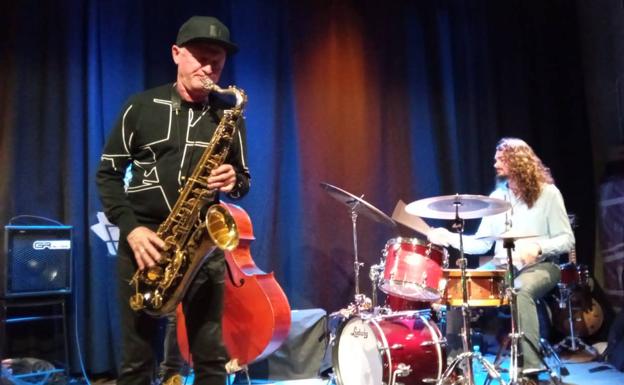 Since before the summer there is a new concert venue in Bilbao La Vieja. It’s called JazzOn Aretoa, it’s run by the people in charge of the Bilbaína Jazz Club, it has municipal support (starting with the building work), and for now it will be open Thursday, Friday and Saturday. On Thursdays it hosts the BJC Auditorium cycle, which has already been running for 32 seasons; on Fridays the cycle called Impulse will soon begin; and this Saturday the cycle called Lithium began. As Gorka Reino said when presenting the first Saturday pass, JazzOn Aretoa will be a cultural center that will host not only traditional jazz concerts, but also dance, theater, children’s concerts, cinema (there will be silent film screenings with live music! ), workshops, a big band of children…

In the concerts on Saturdays there will be a base band, selected from among the eight musicians on the local staff, who will accompany a jazz figure. Musicians such as saxophonists Alberto Arteta, Fredrik Carlquist and Román Filiú, trumpeters David Pastor and Felix Rossy, or guitarists such as Dani Pérez will soon take part. The first Saturday date of this nominated serial ‘Lithium’ was led by the great Andrzej Olejniczak, a Pole naturalized Basque who performed at the head of a quartet made up of José Luis Canal (piano), Unai Olabarri (drums) and Aritz Luzuriaga (double bass), the last two students of the leader in Musikene ten years ago.


We witnessed the first pass, 6 pieces in 70 minutes with great sound (once we looked back and Borja Marcos seemed to be there, although at the end of the set the table was empty and we couldn’t congratulate him personally, so we do it through these lines), solid band (even the double bass solo was cool; the only frankly improvable thing was the black t-shirt that Canal usually wears when he plays jazz, because when he accompanies other styles he usually wears a shirt) and inspiration from the officiants that came to permeate half a hundred spectators scattered around the room and comfortably seated in director’s chairs and with small tables to support the drinks purchased at a bar located in another room (so that the clink of glasses, etc., does not disturb the development of the concerts).

In the first set on Saturday, six versions were played and we will quote all of them: solvents opened the four with the incisive tenor sax in tenorist Eddie Harrison’s ‘Cryin’ blues’; Coltranian spirals drew on ‘And still love her / Y still la Quiero’ by Joe Henderson, one of the Polish’s favorite sax players; a moment of pure truth, of sincere and virtuous instantaneous creation as a sax-drums duo we live them, we enjoy it admired in an energetic, resistant, free, expressive and conjoined sax solo mode entitled ‘Puccini’s walk’ and composed by the Santurtzi double bass player , Puerto Rico, Eddie Gómez for a dachshund that had and walked strangely (this was explained by Andrzej Olejniczak whose name we will never learn because we always use cut and paste to transcribe it); they settled down into a graceful Scott Hamilton-esque ballad with Canal’s very Mancini piano that was supernatural pianist McCoy Tyner’s ‘Search for Peace’ (and which served as an example of America’s cultural soft power); another wonder arose in the most recognizable piece of the half dozen, ‘Night and day’ by the composer of more than a thousand songs Cole Porter, this time with a sparkling and at times ethnic soprano sax that grew undulating and sounded masterful thanks to the four performers; and the goodbye with a stylish and chulángano blues on the dilapidated substrate to the taste of the original composer that was the crazy pianist Thelonius Monk’s ‘I mean you’.

Hum…, writing this text a few hours later we see it clearly: one of the best concerts of the year. Canal arrives to wear a black, sober and formal shirt that we have seen him on other occasions, and we would have noticed instantly on the spot. It is not a joke.

The teaching of Andrzej Olejniczak emerging in a new concert venue