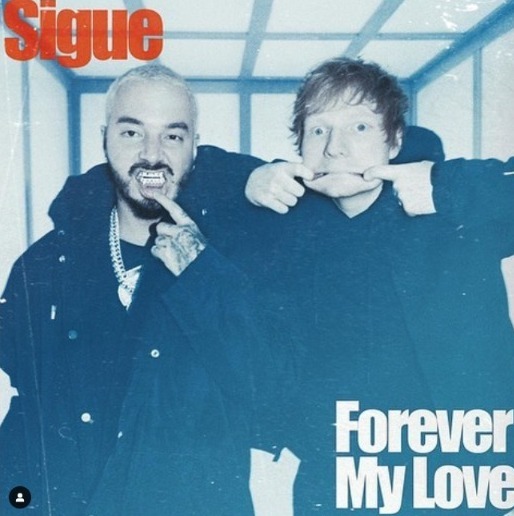 Tweet
Share
Share
Pin
The first two songs from J Balvin and Sheeran’s joint effort, Sigue and Forever My Love, were released into the world on the night of Thursday, March 24. Photo: Instagram @jbalvin

In a gym in new york the artists met. They talked, had a coffee and a “genuine” friendship was created. In Christmas they decided to share a day in the studio which led to the first songs they wrote: ‘Follow’ and ‘Forever My Love’.

“All good things take time. Six months ago I was in the gym and I said to myself ‘this man looks like Ed Sheeran’. Well, it was, it was him. We have a coffee, we talk about life and we meet with a chimba of vibes and creating a genuine friendship, talking from the simplest of how to be a father”, commented J Balvin.

For its part, Ed Sherran recounted his encounter with J Balvin in the gym, “I met him in New York, it was just me and him very early in the morning. I recognized his voice when he was on the phone, so I went over and said hello. We chatted so much that we ended up having lunch and then afternoon tea. Then we just became partners who chatted non-stop. I was in town again for Christmas for gigs and we decided to share a day in the studio which led to much more”.

The first notice of this unexpected creative encounter was put by Sheeran on his social networks, in a photograph in which the two new friends appear together. The British made a brief account of how he personally met the Colombian reggaeton player.

Universal Music defines it as an “EP”, an acronym for “extended play” in English or a medium-length album, although in reality its length is more typical of a single and it lacks its own title.

“The first two songs we wrote were ‘Sigue’ and ‘Forever My Love’ and I absolutely loved them. He wanted to take me into his world and I wanted to take him into mine. It was a real challenge to learn Spanish for this and I had a lot of fun doing it. I hope you like it as much as I do and stay tuned for everything to come.”Sheeran posted his networks.

‘Follow’ It is the most urban-Latin song in the discography of the British soloist. ‘Forever My Love’ the acoustics. In both, Sheeran begins to sing in Spanish, although his English diction is not clear, listening to the British singing Spanish is the most significant thing that happens in the two songs, he has managed to break all the bets that would have been made on the joint fruit of the artists.

The two performers come out of their comfort zone to present this ballad in Spanish and English in which we see the English jump from one language to another with no apparent problem; and J Balvin playing an acoustic guitar.

His message about a love that Sheeran and Blavin will love “forever no matter what”, hardly means anything anymore. ‘Sigue’ features typical reggaeton kick and tropical sounds straight out of 2017, and the ballad ‘Forever My Love’ sounds even more beat up.

“I wanted him to be on a theme in the world of reggaeton and he invited me to his world. It was brutal to hear it in Spanish and we hope you enjoy it as much as we do”, said J Balvin on his social networks.

Maluma and Feid released a new song: ‘Wetting seats’
The reason why Don Omar is trending on Twitter, thanks to Daddy Yankee