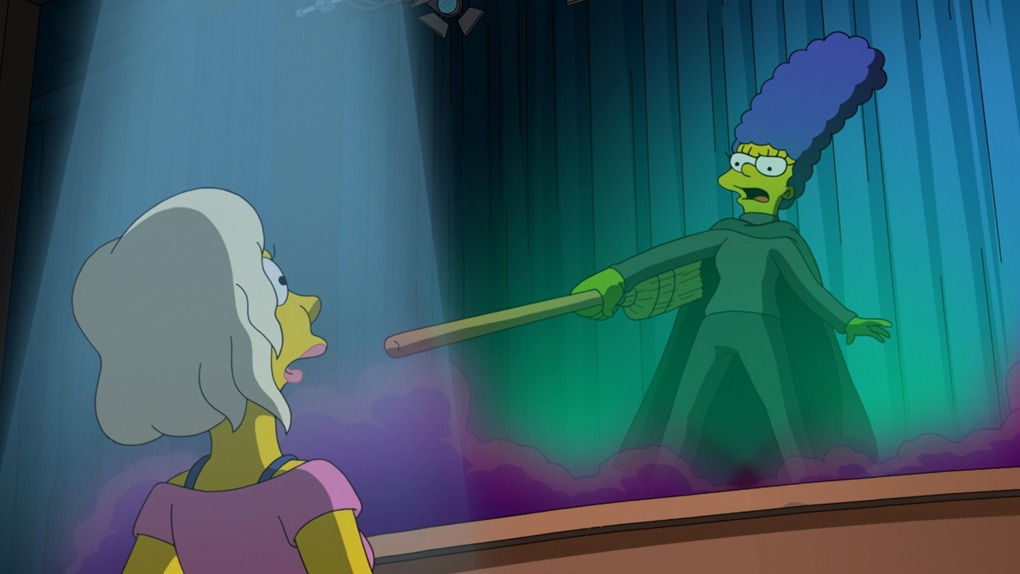 Available since October 5 exclusively on Disney+, the 33rd season of The Simpsons welcomes, as usual, a fine line-up of guest stars for memorable sequences. Overview of the guests to be found in the new episodes!

The most famous animated family of the small screen is back on Disney+ in a brand new burst of episodes available exclusively on the platform. If Homer, Marge, Bart, Lisa, Maggie and all the other inhabitants of Springfield are obviously there in this 33rd season, they are also joined by many distinguished guests. Hugh Jackman, Christine Baranski… here are the stars not to miss in The Simpsons!

The 33rd season of The Simpsons begins with music, while Marge wants to stage a show from the first episode… For the occasion, Kristen Bell, who already appeared in the 27th season, is back in action to give voice. If she does not play a character strictly speaking this time, she lends her stamp to Marge in the sung scenes.

Nothing surprising since the actress is notably the interpreter of Anna in the original version of The Snow Queen. Known for the title role of Veronica Mars, Kristen Bell had already been able to reveal her talents as a singer in the series with a cover of the tube One Way Or Another, by Blondie!

The world is sometimes small in Springfield… In the double episode A Serious Flanders, Cristin Milioti, the famous “mother” of How I Met Your Mother, plays Barb Belfry, a pious woman (but not too much!) at the head of the Saint Giles orphanage. And if the name of this character embodied by the star of Palm Springs and Made for Love means nothing to you, she could nevertheless have an unexpected link with another protagonist well known to fans of the series…

This double episode is also the occasion for Brian Cox (Succession, Troy) to join in turn the delirious universe of the Simpsons by lending his voice to the character of Kostas Becker, an ex-mafioso and debt collector who will come to sow the trouble in the lives of Ned and Homer.

Will Waylon Smithers finally find love? In the episode Portrait of the young man on fire, he meets Michael de Graaf, a wealthy fashion designer passing through Springfield. It is none other than actor Victor Garber, known for his roles in the Alias ​​and Flash series, but also Titanic, Argo or more recently Dark Waters in the cinema, who doubles this new character.

In this same episode, Christine Baransky makes a short appearance as himself and performs the song Dancing Queen under the amazed eyes of Smithers. The star of The Good Wife and The Good Fight indeed embodies Tanya Chesham-Leigh, best friend of Donna Sheridan (Meryl Streep), in Mamma Mia! and Mamma Mia! Here We Go Again. A nice wink!

Coming soon to the original series Reboot on Disney +, Rachel Bloom (Crazy Ex-Girlfriend) is back in this new season of The Simpsons. After a first appearance as the therapist Annette in season 29, this time she comes to the aid of Homer, still upset by the mourning of his mother. The latter is also always dubbed by actress Glenn Close (Fatal Liaison, Dangerous Liaisons).

After joining the MCU thanks to the role of Kingo in The Eternals and the Star Wars universe through the character of Haja Estree in the Obi-Wan Kenobi series, Kumail Nanjiani now invites himself to… Springfield!

In a brilliantly titled You’ll Never Guess What This Episode Is About – Act Three Will Shock You!, Homer deals with some bad buzz. His reputation tarnished, he has only one solution left: to join The Institute, directed by Theo (Kumail Nanjiani), a refuge for all those who, like him, seek redemption…

Ready to raise the temperature in The Idol with Lily-Rose Depp, singer The Weeknd, whose real name is Abel Tesfaye, also lent himself to the dubbing game by playing not one, but two characters in the 33rd season. Simpsons: young Orion Hughes, a famous influencer who owns his own brand of clothing for skaters, and his father Darius Hughes. A double challenge met hands down!

A new teacher is coming to Springfield Elementary School this season. After teaching for two years in Ghana, Rayshelle Peyton will have to familiarize herself with this new establishment and an ever more turbulent Bart. She is voiced by Kerry Washington, known for having held the main role of the Scandal series from 2012 to 2018, and also appeared in the cinema in Django Unchained and The Last King of Scotland among others.

To close this 33rd season, the Simpsons team turned to a real showman: Mr. Hugh Jackman in person ! In the role of a maintenance worker at the Springfield nuclear power plant, the actor delivers a grandiose musical number to the great dismay of Bart. While the announcement of his participation in Deadpool 3 particularly caused a reaction, Hugh Jackman once again demonstrates that he has more than one string to his bow!

Find all the episodes of season 33 of The Simpsons exclusively on Disney+.

The Simpsons on Disney+: Hugh Jackman, The Weeknd… which stars are invited to season 33?