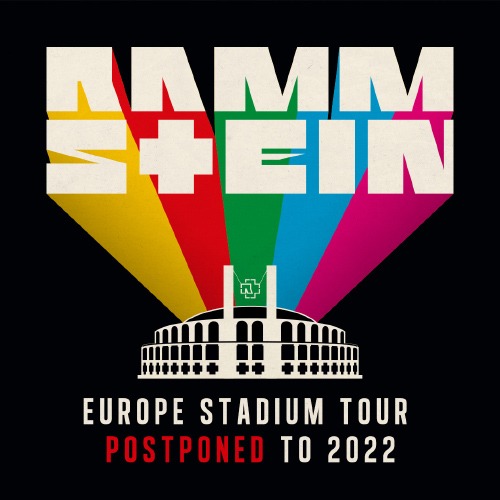 While they had planned to continue their tour of stadiums in Europe and elsewhere in 2020, the members of Rammstein found themselves, like all their colleagues in the world of music, having to bite their brakes. And it is after two years of postponements and uncertainties that they resume the project where they left off: ambitious, pharaonic, and intended to amaze the eyes and ears of hundreds of thousands of fans. . But in the meantime, the Germans haven’t been idle, and it’s not only their album Rammstein that they have to defend on stage, but also Zeit, the eighth opus released in the meantime, barely a month before their big return.

And as you might expect, the public, after having had to be patient, responded: most of the tour dates were doubled, and everything was done to accommodate spectacularly large crowds. Thus, on July 5 in Nijmegen in the Netherlands – almost at home barely half an hour from the German border, as evidenced by the number of fellow citizens of the group in the public – no less than 65,000 people flocked to the spectacular stage set up in the Goffertpark for the occasion. The small dishes were put in the big ones to welcome them and everything takes place with calm and fluidity, even during the date of the day before which threatened to be disrupted by strikes and demonstrations. It’s because the public showed foresight, and arrived by the hundreds throughout a particularly sunny afternoon. Something to start the evening with colors and, for some, already quite soaked…

A 100% Rammstein playlist resounds while waiting for the start of hostilities, then, as an opening act, the duo of French pianists Abélard performs a series of songs from the group: there is no question for the crowd assembled en masse to listen to anything other than the kings of the evening. Joyous megalomania of circumstance or pragmatism on the part of the group which prefers not to send other musicians to the ditch in front of a more than impatient public? It doesn’t matter: the Abélard duo, whose mission is the same as that of the Jatekok duo who performed on other dates of the tour, play their covers with elegance and sobriety, from the predictable “Ohne Dich” to a more daring version of ” Du Hast”. The musicians are warm with a crowd that returns it well, even if little by little, impatience is felt… 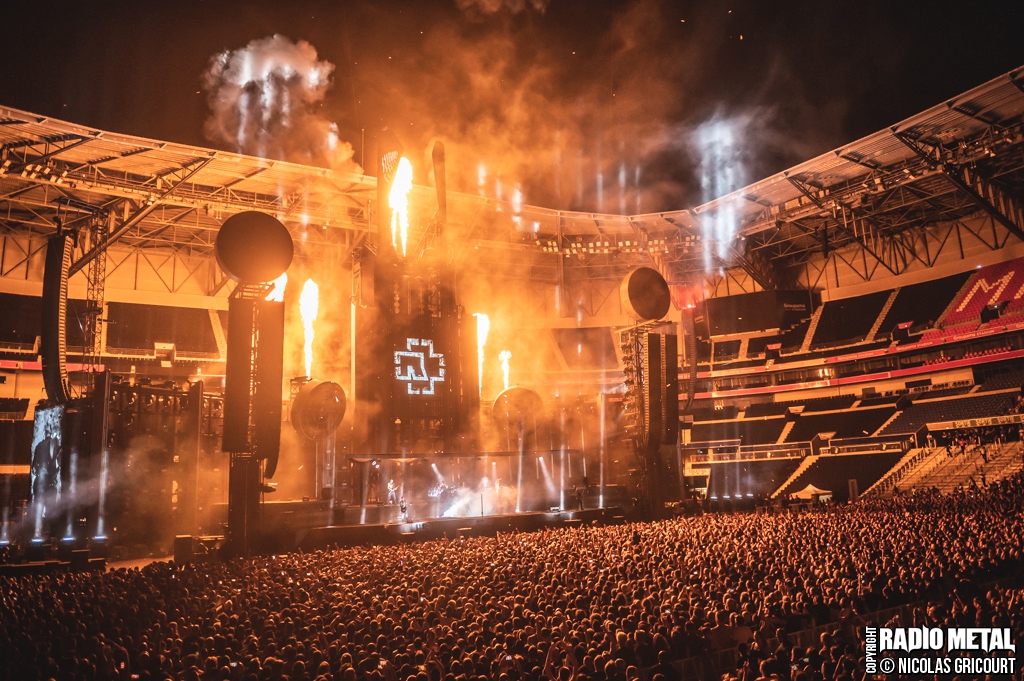 The only exception to the Rammstein monopoly is a piece of Handel that resounds after the broadcast of an informative message aimed at dissuading (in vain) the spectators from filming the concert, and it is on this that the group makes its entrance. on the scene. After all, the star of German Baroque fits them like a glove: the chosen passage is none other than the opening of his “Music for the Royal Fireworks”. What announce the pyrotechnic content of the evening, and the first explosion which marks the opening of hostilities. The introduction to the synthesizer of “Armee Der Tristen” resounds, and the crowd resumes in chorus its unifying “Komm Mit”: this first piece of Zeit seems to have been designed for this use, just like “Adieu”, which closes the album and the evening. What also represents this latest opus, which will share a small half of the setlist with its predecessor, the rest revisiting the greatest hits that have marked the career of the Germans.

Almost occulted by the massive structure of the stage, its slender Metropolis-like lines, the steel, the smoke and the flames, the musicians occupy the ground with remarkable efficiency. More mobile than in the past – the majority of the fire and explosions being high up, at a relative distance from the stage – and obviously happy to be back in front of their audience, they allow themselves small deviations in a well-honed mechanism and keep the public in suspense during the nearly two hours of the concert. In top form, Till Lindemann puts on a show: his voice thunders without weakening and makes us forget the few usual hiccups on some of the most serious passages, he walks the stage, sometimes threatening, often comical, which he asks the first rows to raise their t-shirts, whether he’s headbutting the elements of the decor or hugging them with… warmth. His colleagues are not to be outdone and orbit around him, each at ease in a role that he masters at his fingertips. The two guitarists Paul Landers and Richard Z Kruspe unroll unstoppable riff after unstoppable riff, Christoph Schneider on drums imposes an unrelenting rhythm, Flake on keyboard brings the counterpoint that makes his trademark, and live, Oliver Riedel’s bass has the place to take all the scale it deserves thanks to an impeccable sound system throughout the show, imposing but never uncomfortable, a challenge for an outdoor show.

The essential pieces follow one another without interruption, from the most recent – ​​“Zick Zack” – to the oldest – “Heirate mich” –, from the most danceable – “Radio” – to the most melancholy – “Zeit”. We note in passing that the public seems to react with more enthusiasm to the most recent hits – “Radio”, therefore, and “Deutschland”, which clearly takes on a particular dimension listened to in the midst of a crowd of alcoholic Germans who raise the fist – only to the band’s classics like “Sehnsucht”. Lighter in ballads than during the 2019 tour, the set unfolds without the spectacular mechanics seizing up: the clichés of irreproachable German manufacturing worn down to the bone as soon as we talk about Rammstein are perhaps cliches , but they are nonetheless completely relevant.

What the perfect backdrop for the band’s legendary visual spectacle – or is it the other way around? With Rammstein, you never really know – who accompanies each of the songs. Start relatively early in the evening and long Dutch summer days oblige, it is in broad daylight that the first songs will take place, which hides part of the light show (as such, the Lyon dates will have been luckier) , but not the numbers that dot the concert. The great classics are there, from the pot of “Mein Teil” to the fireworks of “Du Hast”, just like the more recent sketches, like the little disconcerting dance that accompanies the remix of “Deutschland”. The songs with the most disturbing lyrics – “Mein Teil”, “Puppe” – are accompanied by the most humorous sketches, as if to play it down or reinforce the “all public” aspect of the performance. The escapades of “Bück dich” are a long way off, to the obvious dismay of some spectators – ah, the joys of having the first verse shouted in their ears by an unknown fifty-year-old between each song… The show may well be resolutely family-oriented, despite its almost three decades of existence and the assumed fifties of the musicians, Rammstein has lost neither libido nor sex appeal (the discreet Oliver Riedel does a lot for the cause) and what the indescribable phallic canon of “Pussy” loses in realism over the rounds, it gains in size, to the delight of a crowd who seem to appreciate the refreshment after a particularly torrid summer day.

Indeed, after a first break, the musicians took advantage of the small stage where the duo Abélard had performed to perform “Engel” a cappella with him, before returning to the main stage by sailing over the crowd by boat ( !) for “Ausländer” and the ritual Bruderkuss exchanged by Paul Landers and Richard Z Kruspe. The second encore allows the group to finish the concert in apotheosis with an ever more impressive light show, flames radiating around Till Lindemann like a sun on “Rammstein”. The mythology of the group shines brightly and the worship – solar – is celebrated by tens of thousands of people as one man. It’s hard not to be impressed by the extent of what the group has accomplished in a few decades, by its singularity, too, so hard is it to find equivalents in the world of pop, metal or rock.

In short, given the enthusiasm of the crowd during the salute and the sober thanks of the musicians, mission accomplished for Rammstein, who signs a return to the stage in great shape. Concert, opera, circus, blockbuster, happening, amusement park: difficult to classify what we have just experienced, difficult also to resist the succession of superlatives that the show was designed to generate. The yet ironic “schöner, größer, härter” (“more beautiful, bigger, harder”) of “Zick Zack” sums up the excessiveness of the experience. It’s hard to imagine the group doing “more” than that in the years to come, but despite the “Farewell” that closes the show, the Germans seem determined to stay in the spotlight for a while longer. It is that – yes, of course – the German mechanics, which undoubtedly still have some under the hood, are well and truly made to last.