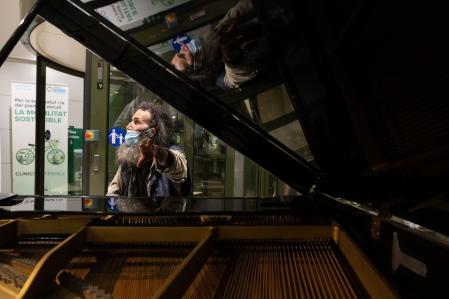 Bolivian Liuvana, who works as a security guard at the Clinic, has seen many curious characters since this Barcelona hospital joined the initiative to vius pianos. This non-profit cultural entity provides pianos to hospitals, among other public and private buildings. The idea is that it be an instrument of free access so that whoever knows and can flood the place “with music and emotions”.

The black Yamaha C3 at the Clinic is a very special grand piano, the first one installed by the association, in December 2021. It has been played by true virtuosos such as Mauricio, 10 years old, who was visiting a hospitalized relative and left everyone speechless. world. “Or like a French lady who is losing her sight, but not the sensitivity of her fingers,” recalls Liuvana. No one, however, has impressed him as much as Drago.

Dragomir Atanazov Donchev, his full name, has lived on the streets of Barcelona since 2012. He is 50 years old, although “with this appearance I look 80”. He has extremely long fingernails and a huge mane of shaggy hair, which hasn’t been combed in years. His teeth are in very bad condition. His clothes, dirty and worn. His appearance matches that of many of the 1,231 people who sleep rough in the city, according to Arrels Foundation.

Drago, who was born in Bulgaria in 1972, spent an afternoon in front of the Clinic and asked Liuvana if he could come in and play the piano. “That’s what it’s there for,” she replied. The security guard does not know when her recitals began, but the first video she recorded of her is from March 27. “Here I am another person and I forget everything,” he explains. when he found out that The vanguard wanted to meet him and tell his story, he said: “But I’m a nobody!”.

A nobody? A self-taught genius! He has learned to play the piano on his own and memorizes beats in his head or merges several well-known songs into a single piece. “I’m a music hunter,” he jokes. He has played the piano for the Maria Casals Foundation at the Urquinaona metro station. And not only the Clinic. Also the Sant Pau hospital, a Kawai model, “which is tuned like the best Swiss watch”.

Many beautiful things have happened to him. Liuvana asked the hospital wardrobe to give her new clothes and she always makes sure that she has masks. A security guard from Sant Pau once brought him a coffee. She has managed to bring a smile to people who have spent the whole day with her sick relatives in the ICU. Many of them record him, including the medical director of the Hospital Clínic, Dr. Josep Maria Campistol.

He likes ‘My Way’, by Sinatra, but he is the protagonist of ‘El hombre del piano’…

“He makes me cry with his notes,” says Silvia, who leaves the hospital very sad every night, where her father is admitted and has been in and out since June. On Wednesday night, a lady tried to approach her piano to give him some coins, but he refused. She didn’t want anything to distract her and, above all, she doesn’t go there to ask. She will give. He knows that his image is shabby, but he assures that it is his “disguise” because “that way nobody bothers me on the street.”

It was also his passport during confinement due to the covid pandemic. “The police stopped people they saw on the sidewalks at night, but they left me alone and didn’t say anything to me. What were they going to tell me? That I go home?” Her face lights up when they ask him if he knows Arrels Fundació. “Of course, they were the first people who helped me. Well, no. The first was Mary, my angel.”

“Your song tastes like defeat and honey”, sings Ana Belén in the version of Billy Joel’s hit

In addition to those who sleep rough, in Barcelona there are 5,100 homeless people because having a roof is not the same as having a home. Drago knows this very well, he has vivid in a storage room of one square meter and in a room so hot that he preferred to spend the night in the street. He arrived in the city without knowing a word of Spanish and learned the language in three months, watching “a Philips television with subtitles.”

The new poverty reaches more and more citizens who thought they were safe. The same happens with the scourge of homelessness. Drago, who as a child bought a boombox and the first thing he did was disassemble it “to see how it worked, he had an electronic assembly business in his country. He could install alarms and maintain commercial establishments. That’s what he dedicated himself to with Galina, his wife.

Cancer had already crossed her life. In 2002 his mother died of a tumor. Her father separated from her and disregarded her upbringing, which fell into the hands of Iván, her maternal grandfather. In 2012, when things were going better for her, Galina also died of the same disease as her mother and he fell into a spiral of self-destruction. “But she looks at my veins and my arms: clean. I don’t drink and I’ve never had a shot.

He lost his job, his house and his north. He was convinced that he would wake up dead any day until someone gave him money for a bus ticket from Burgas, his city, “in the east of the country and one of the gateways to the EU.” He landed in Barcelona with nothing. Today almost all of his belongings fit in three bags, the three that he carries when he goes to the Clinic, but he feels safe and believes that he can fend for himself.

“Everything here has been a miracle for me.” When he was most helpless, a woman approached him on the street and began to speak to him in English, a language that she also learned on her own. Drago was moved that this lady wanted to help him and that she was called María, after his mother. “You are an angel,” she told him. “Well, actually my name is Maria Àngels”. Then came the help of the street team and the Arrels workshop, La Troballa.

“I am not a pianist. I have no studies. I’m good at getting tones, nothing more. It may seem to a layman that I play well, but it’s not true,” she says humbly. There is always someone who applauds him or who yells “Bravo!” Like a man who has been recording him with his cell phone and who works for TVE. The covid stopped his progression in its tracks, although during the pandemic he practiced for three months on a digital keyboard that was left to him.

Interpret the Ave Maria of Schubert with the same devotion as My wayby Sinatra, his favourite, although his story tastes more like “defeat and honey”, like The piano man, by Billy Joel, in the Ana Belén version. She mentally rehearses when she wanders aimlessly. “There are movements that have cost me more than six months”, despite the fact that no one would say so seeing him live. “Tomorrow, everything will be different: improvisation is magical.”

“He is very polite. His music conveys peace and tranquility, ”says Liuvana, the security guard, proud of not having hesitated the day she asked permission to enter and she said go ahead. Soon it will be 9:00 p.m. and Drago will close the piano so as not to disturb the rest of the patients. He will take his belongings and leave. He won’t say where, jealous of his privacy, like any of us. He goes there, down the street, at night, with his three bags.

The homeless pianist at Hospital Clínic