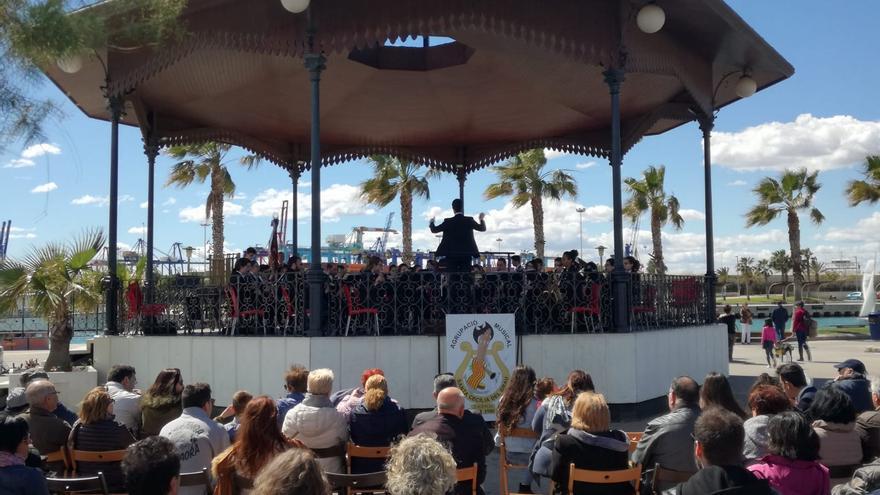 The Santa Cecilia del Grau Musical Group has asked the mayor Joan Ribó to mediate before the Valencia Navy, the competent departments of the Valencia City Council and other institutions to obtain a suitable concert venue, which it has lacked for 2 years due to the restrictions of the pandemic. The manager of the Grao band, José Vicente Martínez, He has taken advantage of Ribó’s visit to this Marítimo neighborhood to convey his demands to him. Martínez explained to Levante-EMV that with the return to normality, once the covid restrictions were overcome, the AM Santa Cecilia has encountered certain administrative obstacles that prevent them from playing in the pergola of the Marina, which is a space that they have been using for their concerts, in the Spring and Late cycles, together with the other 4 bands of the Maritime. The authorities, says the former president of the musical entity, have offered them other venues such as the Teatre El Musical or the La Mutant venue, but these venues have well-established theatrical and stage programs, which is why the symphonic band of this seaside neighborhood finds it very difficult to access free hours or days to act.

Concert by the Grau band in a Marítim church. RLV

As José Vicente Martínez has explained to Ribó himself, the pergola of the Marina is the space preferred by musicians but in the last 2 years the management of this location has changed and it is very complex administratively for them to apply for permits to play there. The same thing happens with Tinglado 2 in the port, where they don’t give them any problems, but it’s not easy to get the go-ahead from the administrations for musicians to perform their concerts.

Martínez recounts that organizing and performing any concert is an odyssey “because we have to go from council to council until at the last minute someone grants us permission to perform in any available space, at the last minute.”

Faced with so many bureaucratic obstacles and due to the permits that are requested for issues such as security or acoustics, the band has chosen to organize their concerts in churches, where everything is faster. Specifically, “the church of San Mauro and that of San Juan de la Ribera where the parish priests give us all the facilities”. Currently, the pergola of the Marina, comments this musical director, is usually the scene of rock concerts and activities related to brands of alcoholic beverages. Martínez recalls that the enhancement of the aforementioned pergola and its qualification as a space for concerts, was a claim of all the bands of the Marítimo that managed to make it suitable for these musical activities, years before the pandemic. “Not in vain, -recalls this spokesperson- we did up to 10 concerts each band, 2 per musical society”.

Among other awards, the Santa Cecilia del Grau Musical Group is the winner -in its category- of the Valencia Provincial Council contest. It has a symphonic band of 70 musicians, a youth band of 30 members and a music school with dozens of children.

The Grau band has nowhere to play