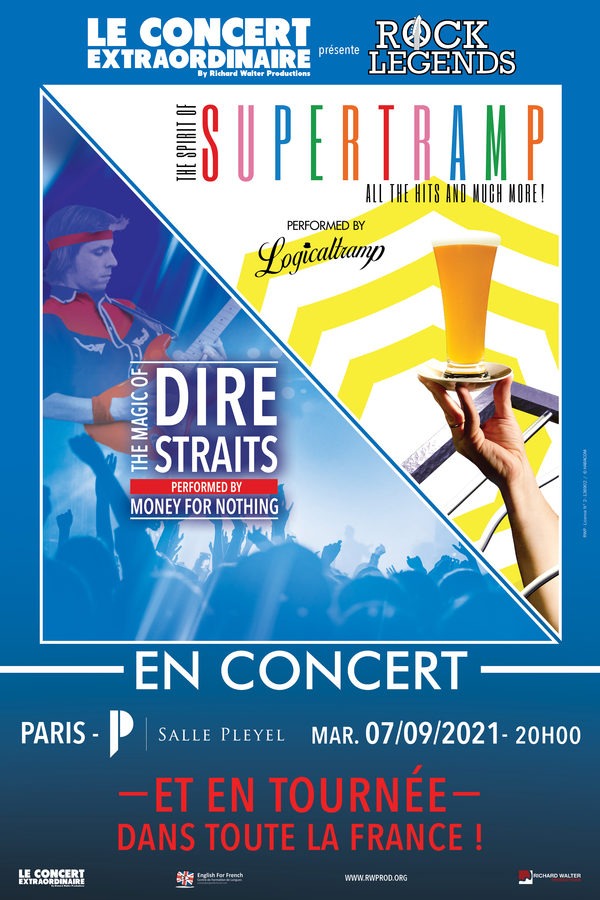 On September 7, 2021, the Pleyel room received Rock Legends with two tribute bands in homage to Supertramp and Dire Straits: Logicaltramp and Money for nothing transported us to the 70s and 80s and revived the greatest British hits of the time. As if we were there? No, we were there. Really. Attention: evening of anthology.

Richard Walter Productions had been waiting for this moment for a year and a half. Allow musicians to take the stage in front of a full house. Blow into a harmonica or a sax. Being at the keyboard, sounding the drums. Vibrate the strings of basses and electric guitars. Sing, with one or more voices. Swing sound and project multicolored light beams. Create an electric atmosphere. Share strong emotions with the public. Live a unique experience with yesterday’s hits and today’s music lovers.

March 17, 2020 was supposed to be the start of a big tour for Rock Legends 3. But it’s all going to end before it even begins. 600 dates canceled or postponed. The rooms emptied, the public confined. We know the rest.

We will therefore have to wait until September 7, 2021 to finally see the legendary groups reform before our amazed eyes. Supertramp and Dire Straits. Or “super tramp” and “desperate situation” in French. Rags to rich instead. Because if the names of the two groups evoke misery, they will quickly become legendary and will generate millions of albums sold in the world.

Two tribute bands in homage to Supertramp and Dire Straits: a mind-blowing reconstruction

The reconstitution of the two groups on stage is astounding. Logicaltramp in the first part of the evening and Money for Nothing after the intermission. Two bands with dazzling talent and so close to the rockers of the time. The scenography, the music, the costumes, the haircuts, everything, down to the tone of voice of the singers, would almost make us forget that it is not the originals that we are applauding. For a bit, it really feels like the 80s. Farewell IPhone, social networks, health crisis… Here we are again immersed in the world before, a world perceived through a cloud of cigarette smoke, where the advent of the CD is a mini revolution and where rock acts as a religion.

The cult titles that made the planet dance follow one another. Goodbye Stranger, Dreamer, Breakfast in America with Supertramp. Sultans of Swings, Walk of life, Telegraph Road by Dire Straits.

Each piece has a story and echoes a memory, a particular moment in our lives. From the first guitar chords or the sound of the first synth notes, we are in it. Completely. Like Modiano in the footsteps of his past, we relive buried emotions, we recognize the hypnotic riffs, we feel the rhythm from within. We are truly witnessing an incredible musical resurgence and the lyrics of certain songs come back to us:

The music is timeless, universal and plunges us into a polysensory absolute. We listen with happiness to the sound of the harmonica on the titles School Where Take the long way home. The sax solo of Bloody Well Right makes us vibrate completely. Rudy plunges us into a more contemplative, almost nostalgic elsewhere.

And then those interplanetary tubes that instantly put us into orbit, like The logical songPaul MacCartney’s favorite track when it was released in 1979, which we listen to again after the concert because we always want more.

The end is explosive with Money for Nothing by Dire Straits: the intro is hovering, installs a particular atmosphere, the synth rises crescendo, supported by the drums which progresses and takes up more and more space. As at the start of a fireworks display, we hear sporadic explosions at the start then precipitate, to welcome at 1’37 min of the piece the first gleaming strings. Then, we observe a break in the rhythm, the drums stop dead, the guitars are launched, drawing a repetitive, haunting pattern. And it starts again with the drums, followed by the vocals. The lights halo the room with a joyful and festive aura. The spotlights turn on and off in rhythm. The tension is palpable. No need to fight, it’s been almost 40 years and it’s not ready to stop…

At the end of the concert, we are no longer at the Salle Pleyel but at the Stade de France after a goal by the national team: the whole audience is on their feet and expressing themselves emphatically. The atmosphere is incredible, the general jubilation practically indescribable. To succeed in creating such a craze is a feat.

On the poster, we are told about a concert extraordinarywe were warned.