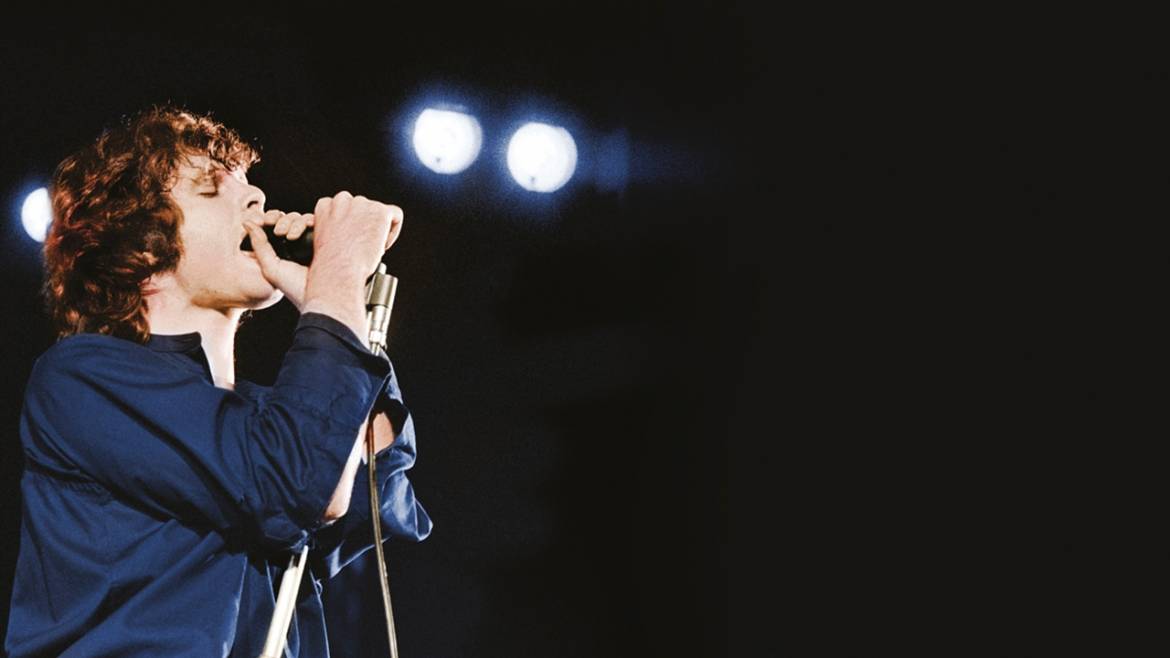 On November 27, I (re)lived a unique experience. But it wasn’t in a concert hall for once.

For the director of Gaumont cinemas in Toulouse and its agglomeration: “The movie theater is the temple of film and must remain so”.

It was in a unique room of its complex, combining Dolby Atmos for sound and Dolby Vision for image (1), that was projected The Doors Live At The Hollywood Bowl 1968 : a legendary, intense, cult concert, the only concert of the group ever filmed in its entirety, the filmmaker Paul Ferrara being director of photography.

The image is superb, polished like that of a painting painted with egg tempera.

For the 50th anniversary of this legendary show, the producer of the Doors, Bruce Botnick, responsible for the original recording, supervised its restoration, “to offer the public a moment out of time, as if we were there”. 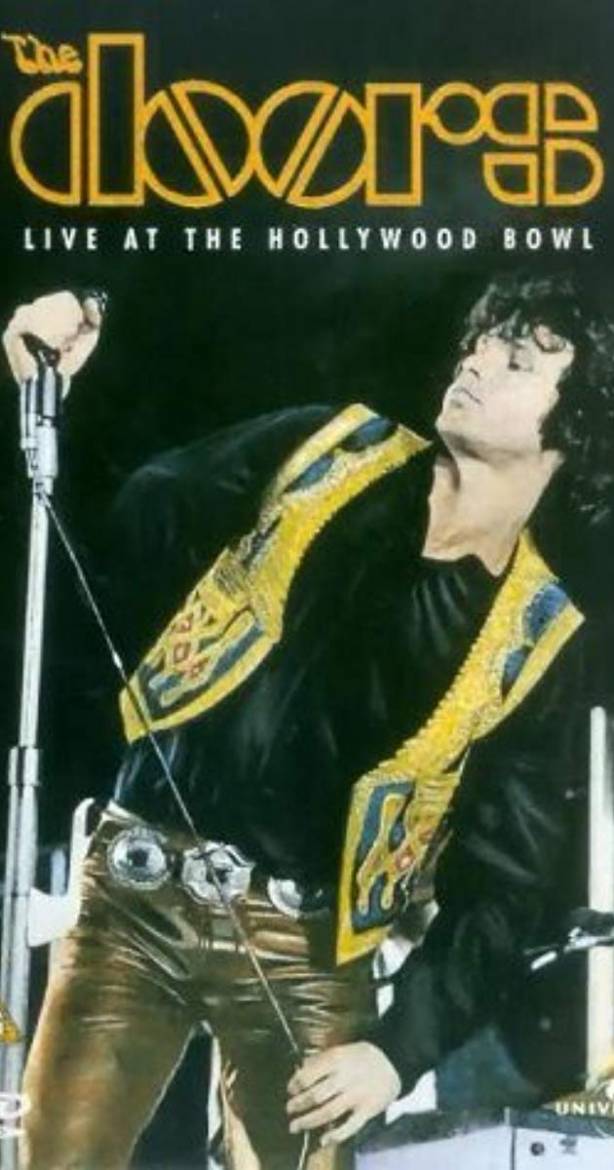 So we came back on July 5, 1968, in California, the Doors gave one of the first concerts in a stadium in rock history, at the Hollywood Bowl (2).

And my neighbor said to the pretty blonde lady lying next to him: “imagine that we have just made love by moonlight on the beach of Venice and that, hand in hand, we are going to listen to the Doors, the great attraction of the moment”.

The atmosphere is given…

From the first notes, I realize again that the Doors, musically apart among the formations of the time (bass, drums, guitar), it was an original sound: namely that of a gray Fender electric piano at 32 notes surmounting a Vox Continental -one of the first fully transistorized pianos-, Manzarek’s left hand acting as bass; a fine and jazzy drummer, even in moments of delirium, John Densmore ensuring in a beautiful way and following his leaders; and in a powerful bass-baritone voice, Morrison perfectly in tune and in place, even in his high.

The sound is impressive for the time, with a mountain of JBL speakers (if I’m not mistaken), a giant HI-FI system. 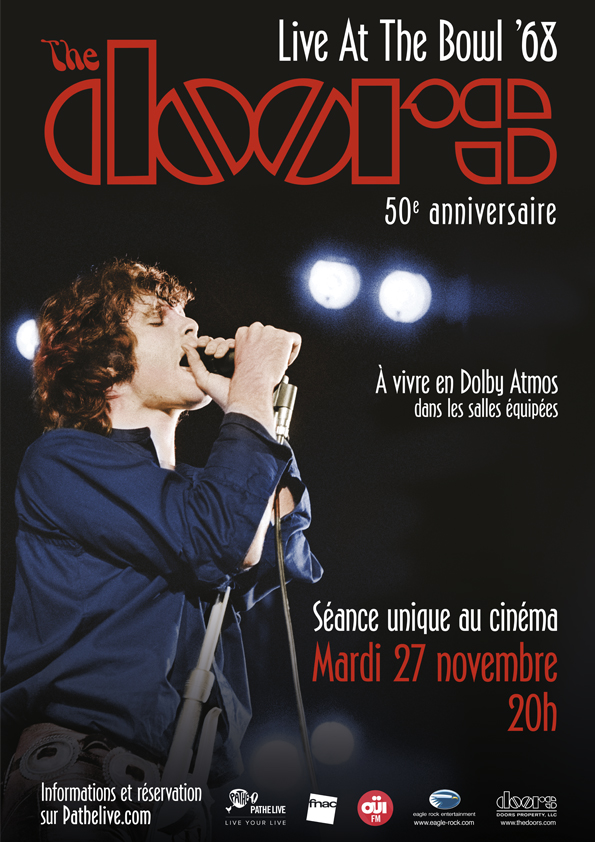 And I realize, once again, that if Ray Manzarek was a great keyboard player, “running the shop”, as the musicians say, Robby Krieger was a poor guitarist (especially when we saw Jimi Hendrix or Pete Townshend!), sometimes even playing out of tune and seeming unconcerned. I also realize tonight the obvious frustration that this often limited and clumsy guitarist inflicted on a Morrison totally committed to his artistic bias where he experimented on himself artificial paradises: hence certain furious looks (the only thing I recognize him is that he brought an exotic note with his hispanic flights).

A veritable “stage beast”, Morrison had already focused criticism, by embarking his partners in his shamanic delirium, with Rimbaud or Baudelaire as a reference, and the rock-critics had made him the new great poet of the 20th century a little too quickly; his work steeped in “classic” and often dazzling literary references, will in the long run prove to be modest in quantity, even if it was an unforgettable discovery for me.

But the stage games he developed will remain in the collective imagination, including that of the “Lizard King”undulating on the ground and mouth wide open ready to bite, like on the cover of one of the greatest records in the history of Rock, Absolutely Live.

Even if it is certainly not the best concert they have given, Morrison, visibly very drunk, less dynamic than usual, is still as charismatic as I remember, a few months later, at the Roundhouse in London, where I had the great good fortune to be present in September 1968.

But the cream of English musicians, Cream precisely, The Who, Traffic…, actors Julie Christie and Terence Stamp, were present!

And Jim Morrison was in pretty good shape!

He entered, walking majestically on the stage, dressed in a tight black leather suit, a white shirt and brown shoes. It was obvious that he was hovering very high and that he intended to dramatize his show. Julian Beck, the director of the Living Théâter, had taught him to chant his poems in long incantations interrupted by meaningful pauses, before launching his famous “primal cry”.

The Doors at the Roundhouse 7th Sept 1968 – photo: Joss-Mullinger

This man had a great culture. I had noticed the numerous literary references, such as Bertolt Brecht, in Alabama Song ; and of course, like everyone else, in The Endthe famous phrases “father, yes son, i wanna kill you”, and “mother, I want to fuck you”, inspired by the Oedipus of Greek tragedy, spoken with closed eyes, in semi-darkness. At the time, this was considered blasphemy!

He also preached a revolt against the Establishment of the time, the political power, the army in particular, his father being a very active member: in Unknown soldierhe mimed his execution by firing squad. Intellectual engaged in the protest song movement, in particular against the war in Vietnam (but not claiming any political movement), in five to one, he encouraged his public to refuse to do it and to revolt. “What bullshit, war! » he said like Prévert.

His country will make him pay dearly with repeated arrests and trials, trying to asphyxiate him financially and judicially, which, in addition to his excesses of all kinds, will hasten his downfall.

However, the cult of his fans eclipsed his poetry, which Jim himself considered his main activity. And that he would have liked to continue in Paris, the city of his heart’s poets (I find myself dreaming of what he could still have written, if he had lived a little longer…). To end unfortunately at Père Lachaise, next to some of them certainly, but given over to unbridled idolatry, dripping on the tombs and the surrounding alleys (3).

That day, I continued my walk directly to the Mur des Fédérés where I left my two red roses and hummed the Cherry Time for Louise Michel and Jean-Baptiste Clément.

Tonight, thanks to the cinema, the myth of the artist Morrison is still wonderfully alive, for the “old timers” like me and for those who haven’t had the chance to see him on stage.

And this projection has astonishing echoes: Jim Morrison, student in the Department of Cinema at UCLA (University of California at Los Angeles) wrote many lines on this subject in Lords and New Creatures.

In this luxurious room, certain quotes came back to me:Cinema does not derive from painting, literature, theater, but from an ancient and popular tradition of witchcraft. It is the contemporary manifestation of a long history of shadows, a delight in the moving image, a belief in magic. Its lineage is coupled from its earliest origins with priests and sorcery, a summoning of specters. With the modest aid of mirror and fire at first, men conjured up dark and secret visits to the buried regions of thought: in these seances, the shadows are spirits that ward off evil. »

And also, “cinema is the most totalitarian of the arts… The body only exists for the eyes, it becomes a dry stem that carries these two soft and insatiable jewels”… “the film confers a kind of false eternity”…. (4).

And especially : “There will come a time when we will need a weather theater to remind us of the feeling of rain”.

That evening, rediscovering real life on the wet cobblestones of Place Wilson, the rain was gentle on the memories of my youth.

Jim Morrison changed my life like that of thousands of young people of my generation.

Like other great artists of that time, who even paid with their lives for some of the hijacking of the media, at a time when it was becoming the preserve of authoritarian politics, he stepped forward, naked and terribly vulnerable, on the trestles of the public square.

In addition to the pleasure they gave us, these Rock Poets taught us that you always lose when you renounce your convictions and your principles, in particular the Rights of Man and of the Citizen.

And “Music is our best friend. Until the end ” !

So long, Mister Mojo rising (5). And thank you.

Hope you found a feast of friends closer to the sun.

1) The Atmos room is equipped with some 80 loudspeakers located as much on the sides as in front and above the spectator. The sound moves with such precision that it greatly contributes to the very atmosphere of the scene it underlies. The sound immersion is total. It should also be noted that the soundtrack is of rare precision in the dialogues, a particularly sensitive subject in today’s cinema. The magnitude of the bandwidth allows the deepest bass to express itself as well as the most vertiginous treble. As for the dynamics, it’s a whole spectrum of sound emotions ranging from murmur to telluric explosion.

Vision side, exit the xenon bulb, here is the double laser projection. The result: twice as much brightness, a contrast ratio 500 times greater than conventional projection, blacks of breathtaking intensity and a much wider range of colors which obviously appeals to animation filmmakers.

Finally, and this is not nothing, an extraordinary 3D thanks to the double projection, on a screen of more than 20 m wide, which allows an image for the left eye and one for the right eye without using color wheel sometimes causing flashes and flickers in classic 3D.

327 top-of-the-range recliner chairs await you. They are reclining (back and legs), spaced two meters per row with double armrest. Vision is perfect wherever you are. The elegance looks austere, but it makes the experience immersive, powerful and memorable.

2) The Hollywood Bowl is a modern theater with a capacity of 17,376 seats hosting outdoor shows on the heights of Hollywood: it is the largest natural theater in the United States. Located off Cahuenga Boulevard West at 2301 North Highland Avenue, it is visible from the Hollywood Bowl rest area on Mulholland Drive. Officially inaugurated on July 11, 1922, its stage is characterized by a shell made of concentric arches. Initially welcoming classical concerts, it also hosted memorable rock concerts, including that of the Doors.

3) If there is one thing for which we must thank Mrs. Yoko Ono, it is to have had John Lennon buried, in a place known only to her and her sons.

The Doors at the Hollywood Bowl 1968: Jim Morrison at its zenith… at the cinema