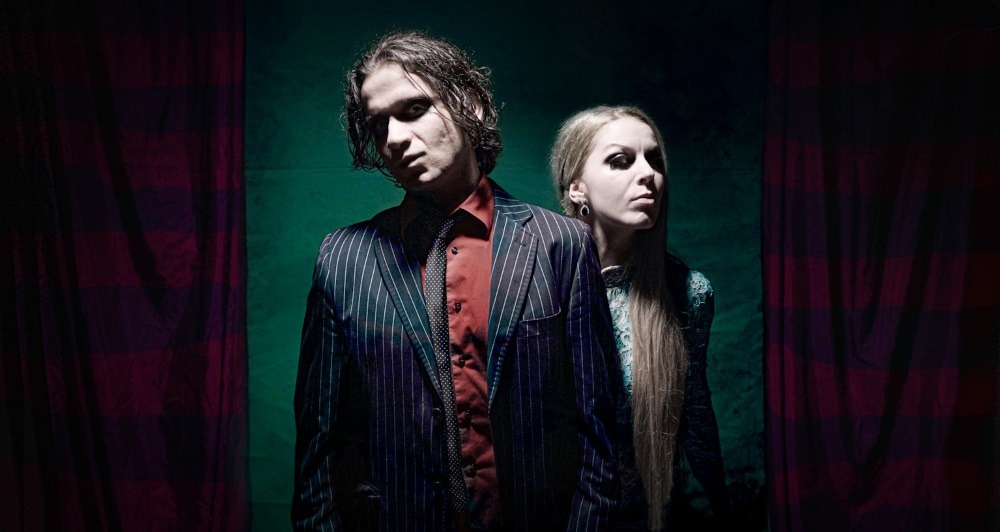 
THE DESIGNS is the new project of Billy T Cooper ex-JTR SICKERT and Snovonne ”Sno” Drake. The duo combine electronic elements with their metal but remain eclectic and sometimes experimental. In fact, the music is perfectly crafted to deliver the desired musical experience to the listener, as THE DESIGNS itself states. We met the two musicians during their concert at the Black Lab in Wasquehal on September 1st, delighted to tell us about “ [In] Vent”, their first album released last August.


You both come from separate projects before THE DESIGNS, how did you meet and choose to work together on a new project?

Snovonne “Sno” Drake: Yes, we both have been making music since we were very young. My solo project SNOVONNE and Billy’s previous band, JTR SICKERT, often toured together. We have known each other for about 10 years. 3 years ago Billy called me to make videos for his new songs and do some vocals too. Once we started working together, we realized that our creativity blended very well, so we decided to start this new project together.

Billy T. Cooper: We wanted to create something crazy and artistic together. We both come from rock/metal backgrounds, but like to listen to a wide variety of music. My previous band, JTR SICKERT, was a bit more into industrial metal and the solo material on ”Sno” is more into an orchestral, nightmarish rock genre. We love all forms of art, so we want to create a world that encompasses all of that, including visuals that people can spend time with. ”Sno” also works in graphic design and video production, which of course helps us achieve these goals.


In which musical genre could you define THE DESIGNS?

You complete a marathon tour with CHRISTIAN DEATH promoting ” [In] Vent » your first album, you’ve been waiting to hit the road for a while…

Snovonne “Sno” Drake: Yes, we just finished a European tour with them and it went really well, we had a lot of fun and loved the places we played and the audience. It was special for us because we had been waiting to shoot for a long time… We started THE DESIGNS just before the pandemic took over, so naturally all our plans had to be put on hold. Additionally, our debut album “ [In] Wind” has only been released since August, although it has been over for a while. We are already working on a new one.

Billy T. Cooper: Yes, it was great to be on stage again. For us, and especially for me, the shows are very visceral and physical. I like to mess things up, so I really missed that.

Which artists or bands can we cite as your main influences?

Snovonne “Sno” Drake: I grew up with a lot of jazz/blues and classical music stuff through my family. I played piano with my grandfather, also guitar and clarinet. So I can quote Aretha Franklin, Mary J. Blige, old swing records… I’ve always liked rock, metal, pop… DEPECHE MODE, NINE INCH NAILS, Lana Del Rey, THE PRODIGY. .. and tons of other things.

Billy T. Cooper: I had a lot of classical music around me when I was a child, I played the piano and then when I discovered the electric guitar, I became crazy about hard rock and metal. Now, apart from that, I also listen to a lot of electronic music… THE PRODIGY, NINE INCH NAILS among others.

What experience will you keep after your stay in France?

Billy T. Cooper: We loved playing in France. The two concerts in Wasquehal and Paris were great. The audience was great fun and we met a lot of very interesting people. Of course, touring is always tiring, but we missed it a lot, so we’re happy that the concerts are back. I really hope to come back to France. Long live France, long live freedom!

If you could have the chance to collaborate with an artist, with whom you would dream of playing among them and those who are unfortunately no longer in this world?

What can we wish for THE DESIGNS in the coming months and for the fans who have discovered you on stage?
If you like cool grooves with different layers, mixed with metal, don’t hesitate to listen to our album “ [In] Wind ” ! We would like to count you among our fans and, we hope, see you very soon!