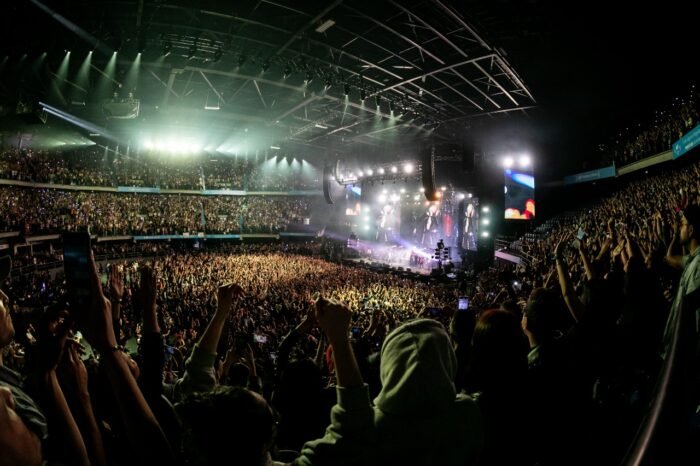 The partners Hernando Sánchez, Eduardo Olea and Germán Gómez, in addition to what they earn for each ticket they sell, is added that they have 20% of the Movistar Arena

More than twenty years ago, businessmen Eduardo Olea, Hernando Sánchez and Germán Gómez founded “Tu boleta” to sell tickets for massive events. They were far from thinking about the boom that it would become for them, although it was not new in the world, they were the pioneers in Colombia.

The business took shape with the matches for the World Cup qualifiers in Korea and Japan in 2002, in which the Colombian National Team faced Argentina, without even people daring to buy the tickets digitally and they continued with the habit of moving to the points of sale. However, the partners were determined to bring viewers to the digital purchase: they developed robust software with large investments in technological infrastructure capable of supporting the web page between smartphones, tablets and computers, and a lot of advertising.

Concerts have multiplied in Bogotá, and between 2017 and 2018 each year they grew by more than 30%, except for 2020, the year of the pandemic in which the stages were closed. The physical rows were displaced by the virtual ones in the dozens of concerts that are now sold in the first 24 hours of opening to the public.

The total sale occurred again at the Festival Estéreo Picnic (FEP) attended by more than 110,000 people, the sold out of artists such as Miley Cyrus, Dua Lipa, Harry Styles, Karol G, Bad Bunny, Coldplay, the five dates of Morat , the return of Alejandro Fernández, Juanes, Zoé, Caifanes, Kiss, Guns N’ Roses, Rubén Blades, Camilo, who have the world of entertainment in Colombia in an upward and accelerated curve.

To compete in a big way, Tu Boleta made a qualitative leap in technology and bet on robust technological tools like Softland’s. The system allows for controls on sales, such as traceability on each ticket that prevents duplication at the ticket office, or a maximum number of tickets per customer. For the latest events, individual tickets range between 85,000 and 2,200,000 pesos.

Your ticket charges between 10 and 15% for the sales service, a percentage agreed with the employer according to the show, plus an additional one in case you need to put employees at the gates of the stages with barcode readers to give you access spectators, which happens more in massive events. The main clients of Tu boleta are Ocesa Colombia, Páramo Presenta, and the Theater Festival, companies that are in charge of bringing the shows. New promoters have entered the game such as Diomar García Eventos, the person in charge of Bad Bunny’s visit to Medellín that will take place in November.

The three partners are still active in the company, Hernando Sánchez Gil, is the current general manager, Eduardo Olea, former president is currently manager of investigations, and Germán Gómez director and legal representative. The company has 150 employees and assets of more than 7 billion. It also has more than 70 points of sale located in different cities. .

In Colombia it is estimated that, on average, each person attends between 3 and 4 shows a year, with Bogotá being the best place since the theater works every day. The remaining 30% of the market is disputed by Ticket Express, Primera Fila and Ticket Shop, which have had to find various ways out of Tu Boleta’s domain, for example, seeking a presence in regional events or agreements with certain scenarios.

Tuboleta is part of the company Coltickets, which together with Hiller Inversiones de Chile made the renovation of the El Campín Covered Coliseum in the Public Private Association (PPP), now Movistar Arena, the preferred place for concerts after the pandemic. And this is another vein of business, otherwise very profitable.

The contract with Movistar has a duration of 20 years, and is estimated to be worth $2.5 million dollars per year. Fabián Ramírez, CEO of Telefónica Colombia, indicated that they will transfer to Colombians the benefits of the successful model that Telefónica has developed in England and Chile through the O2 Arena in London and the Movistar Arena in Santiago, where it combines the best live entertainment with a unique experience for attendees, exclusive benefits for Movistar customers and access to the latest technology and connectivity during the shows.

His Majesty the Movistar Arena: the best place to go to concerts in Colombia

The boom for the concerts that has enriched the 3 friendly owners of Tuboleta – Las2orillas.co