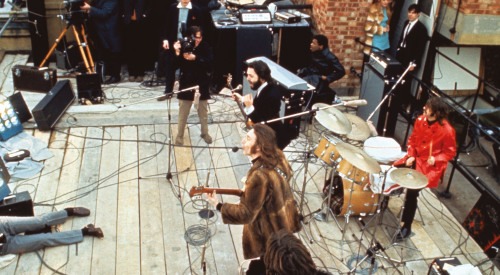 The Beatles – A documentary and a book called Get Back return to the conception of the future Let It Be, the final chapter in the history of the quartet. The opportunity to demystify a period that we thought was cursed

Ray Dagg don’t regret anything. Why should he? It was his job and he did it, even if it meant bluffing a bit, as he willingly admits, prescription requires. Because if the young policeman had the possibility of putting an end to a concert, he had no authorization to make arrests.

Now 72 years old, the peaceful retiree almost smiles, surprised that we are talking to him again about this story. Behind a certain bonhomie, it is not difficult to find the young man in love with principles. This taste for rigor, this respect for order. And then he the Beatles… His thing was Simon & Garfunkel. But there was nothing personal about it, it was his job…

On January 30, 1969, the bobby moved to number 3 Savile Row, in the heart of London. For half an hour, calls to the police station have multiplied to denounce a “raffut” that never ends. When he arrives in front of the offices of Apple Records, he finds that the crowd has gathered in the neighborhood, listening to what everyone has guessed to be the Beatles shouting in unison. Don’t Let Me Down. When he enters the lobby of the building, the Fab Four have moved on to another unheard of, I’ve Got a Feeling. Dagg and his colleague, Ray Shayer, don’t care. “We don’t appreciate that”, said the first, clutching his gloves in his left hand. The tone is professorial. Without the gloves, the agent would probably have made a circle by joining the ends of the thumb and the index finger while brandishing the whole thing towards a Jimmy Clarke, doorman of Apple, studious and whose only concern, in the immediate future, is to play the watch. Rigor, principles… The job.

In the studio with the Beatles

Finally – in a completely different context – this is exactly what the Beatles have just inflicted on themselves for almost a month. And the set that is rocking the City of Westminster is one of the fruits of those weeks of hard work. 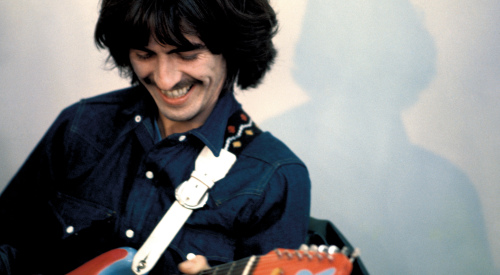 Scattered since the release of the Double WhitePaul McCartney, John Lennon, Ringo Starr and George Harrison met in September 1968 to record the video for Hey Jude. Gathered around an audience made up of fans, the quartet enjoys the experience. The idea of ​​concocting his next album under the same conditions begins to germinate. Quickly, the project is refined: the writing and the recording of the disc will be filmed by Michael Lindsay-Hogg and his team. The director knows the group. We owe him the clips of Paperback Writer, Rain, Revolution and justly, Hey Jude. The icing on the cake: the whole thing will be crowned by a concert – the first for the Beatles since the end of August 1966 – which will be broadcast on TV during a special broadcast. 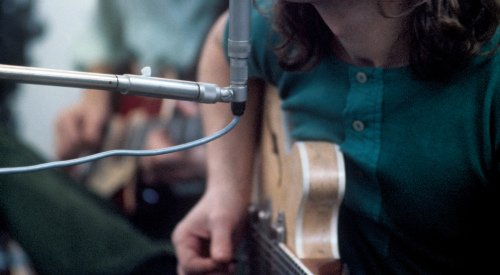 The schedule is tight, the constraints numerous. Fortunately, the musicians are inspired and have, with the future Dig a Pony, All Things Must Pass and Don’t Let Me Downa sacred matter to attack the sessions.

We are January 2, 1969, the group begins a long creative process by exchanging its ideas. In addition to the quoted pieces, Lennon slips snippets of Sun Kingfuture piece of the medley ofAbbey Road and a ballad which, depending on the day, is called Child of Nature Where On the Road to Marrakesh. Later it will be known as Jealous Guy. McCartney has in his bag the first jets of The Long and Winding RoadOh Darling and Maxwell’s Silver Hammer. He will not release them this first day, preferring to concentrate on a I’ve Got a Feeling to which Lennon replies “I’ve got a hard on” (“I have the boner”note).

If Harrison is concerned about the acoustics of Twickenham studios, everyone shares their suggestions (some more than others) including Ringo Starr who offers Taking a Trip To Carolina of which he himself is not convinced. The atmosphere is good but the coldness of the place and the presence of cameras seem to disturb people’s minds.

For half a century, one of the most famous passages to illustrate the end of the Beatles is this extract where we see George Harrison, annoyed, say to Paul McCartney: “I’ll play whatever you want me to play or I’ll play nothing at all if you don’t want me to play. » This passage alone served to fuel the debates, suggesting that the Beatles no longer supported each other during the conception of the album. Get Backbecame let it be for posterity.

In the end, Peter Jackson had to put his nose back into the dozens of hours of recording for everything to become clear and for another version of the facts to appear. The director of Lord of the Rings restored everything, reassembled. Four years will have been necessary. And faced with the difficulty of condensing it all into two and a half hours, he chose to offer a documentary split into three parts for an overall duration of nearly eight hours.

It was enough to interfere in this special time. Of course, the tension is palpable there and if the Beatles had been a Mediterranean group, there would surely have been loud voices, slamming doors and names of birds everywhere. But the Beatles are English and restraint is in order, including in difficult times, like the one when, on the seventh day, Harrison gets up quietly in the middle of rehearsal: “I think I’ll…I’m leaving.” » Misunderstanding Lennon: ” What ? » Harrison clarifies: ” The group. ” ” When ? “Now (…) replace me.” Advertise in the NME (New Musical Expresseditor’s note) and see people. »

Tired of being relegated to the background, of not being heard, the Quiet Beatle leaves. Ringo Starr, who had done the same the previous year, remains impassive but suffers in silence. Lennon and McCartney understand that we will have to catch up.

A dive into history

The documentary and the Bible which retraces, word for word, the scenario (Get Back by the beatles, published by Seghers) allow you to dive back into these historic moments. The book is, moreover, embellished with a colossal number of photos signed Ethan A.Russel and Linda McCartney.

Each format makes it possible to gauge a group whose creativity is at the top but whose members are now like siblings who have grown up and now aspire to something else (especially Harrison whose number of songs in reserve increases day by day). Since the death of Brian Epstein, the historic manager of the group, Paul McCartney has taken it upon himself to ensure that everything goes for the best, especially on the artistic level. Passionate about work, the bass player is so creative, so perfectionist that he can give the impression of wanting to control everything and sometimes, in spite of himself, leaves little space for others, Lennon apart. The feeling is very present in the documentary but that does not make the musician any less endearing.

Lennon, precisely, appears distant from the image that one could have of him at that time. That of a musician increasingly isolated within the group. If Yoko Ono is omnipresent by her side, she most often remains discreet (except when she goes behind the microphone) and it is not uncommon to see her chatting with Linda McCartney, proof that the theory of evil wives has not more place to be. John, on the contrary, seems calm, open, available with always a joke.

George Harrison eventually returned to the parent company. The team left Twickenham for Apple studios, which were deemed to be warmer. Supported by producer Glyn Johns, a retired George Martin and the indispensable manager-handyman, Mal Evans, the group resumed rehearsals and welcomed keyboardist Billy Preston as reinforcements. The arrival of their old friend, former pianist of Little Richards and Ray Charles, will boost everyone. The atmosphere becomes good-natured again, discussions are going well. Plans to do the concert on a cruise ship or at the ancient theater in Sabratha, Libya, fell through. It is now a question of performing at Primrose Hill, a London hill, before the choice stops on the roof of Apple.

In the middle of the bla-bla, McCartney puts down a few chords on the piano. Do, Sol, etc. The indifference is relative, but the spectator raises his head. Paulo is composing nothing less than let it be and no one seems to notice. All this time, we imagined that the earth had stopped turning when this moment arrived and there, nothing. Five decades later, we exult in front of our TV: “Nobody picked up but me, yes! Whore ! let it be, guys. Really ? No one is listening? »

This is probably where the Jackson documentary magic happens. Beyond the quality of the images which make the whole very current. Little by little, the spectator is sucked in, he becomes part of the furniture, smiles at the slightest valve, plugs his ears when Yoko sings or looks at the ground when tempers flare (the days go by, the concert is constantly postponed but the schedule is strict). Musically, we are witnessing real miracles. drafts ofAbbey Road (particularly She Came In Through the Bathroom Window, I Want You (She’s So Heavy) and especially, Something) to other tracks that will end up soloing.

Over the days, Glyn Johns has recorded enough material. The setlist of the concert is being refined. McCartney still has doubts but he reasons himself: “It’s when we have our backs against the wall that we give the best. »

While shaving, this morning of January 30, 1969, Ray Dagg does not imagine that he has an appointment with history. To tell the truth, the policeman doesn’t care. On the side of Savile Row, everyone forgot that three weeks earlier, Paul McCartney had suggested to do the concert “in a place where we are not allowed to play”. He had considered the option of getting kicked out by the police, forcibly kicked out while the band tried to continue playing.

On this cold and dry morning, the imminent realization of weeks of work plunges the whole team into doubt. John Lennon would have had to drop a “Damn it, come on, let’s go” so that everything rushes and history is written.

This story is now copiously told by an exceptional documentary, long forgotten, and an essential work that is not only aimed at enlightened Beatles fans.

For decades, we considered let it be like a bitter ending. But the bitterness came later, with the appearance on the scene of manager Allan Klein, who is still barely mentioned in the doc, and the production of Phil Spector who, after recovering the tapes from Glyn Johns, added sandwiches of strings to the point of disgusting some Beatles themselves. Without ever respecting the primary idea of ​​going back to basics, without the slightest artifice.

Nearly 53 years after the events, Ray Dagg says he has no regrets ordering the Beatles to stop playing. It was his job. But today, everyone can see this moment when Paul McCartney gives him a “Get back to where you once belong” singing (“Go back where you came from”), as everyone will realize the bobby let the Beatles himself put an end to their final public appearance. “Thank you all, I hope we passed the audition”, concludes John Lennon. Ray Dagg was not a bad bugger. He was just doing his job…

The Beatles, So Were They