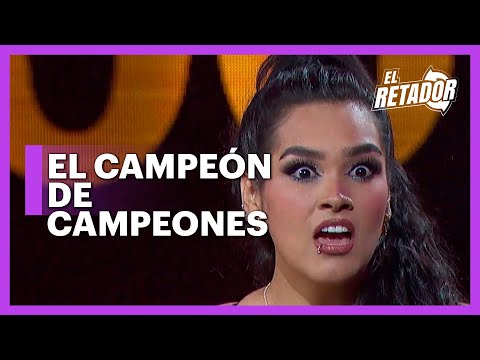 During the final gala of “The Challenger”, while waiting for the result of the jury, standing in the middle of that imposing stage of the Mexican reality show, Joaquina Carruitero She thanked life and that inner strength that allowed her to bare her soul and shed her fears to pursue her artistic dreams by being herself.

After consecrating herself as champion in the singing category, on October 2, Carruitero was crowned along with the Mexican Verónica Linares, a participant in the imitation discipline, as Champions of Champions. Both raised the cup and took the prize of three million Mexican pesos, an equivalent of 150 thousand US dollars.

“It was a historic draw, I’m happy, it was my revenge. Last year I entered the imitation category, as Adele, and I did not advance. This year I opted for the singing discipline, and I won. It is an important step for people to start calling me by my name, to know me as Joaquina, because it’s frustrating that they only see you as someone’s imitator”, points out the talented Peruvian artist.

—How did you get to “The Challenger”?

The production called me, they bet on me, I didn’t have the need to do a casting, I imagine it was because they saw me in “Yo soy Perú”.

“What will you invest the money you earned in?”

If I had taken the three million pesos, that is, almost 150 thousand dollars, I would have bought an apartment, but since I tied and only took half (almost 75 thousand dollars), I will invest the money in making my own music, something nice , and in buying a car, I need it to get around.

—At what age did you appear on a singing reality show for the first time?

At 13, it was in “La Voz Kids”, and at 15 I tried to enter “Los 4 finalistas”, but they didn’t choose me. A year later I competed for the first time in “I am”, imitating Adele, and I won. Later I was in several seasons of “Yo soy” and at 18 I joined “La Voz”. That same year, during a break from the Peru program, I participated in “El Retador de México, when I was there, alone, I turned 19. Since I was 16 I have taken care of my expenses, I live from music, from singing.

What does music represent to you?

It is freedom, love, expression. In recent months I have learned many things, I learned that musicians are free, now I am free, I can show myself as I really am and people support me.

—In your presentation speech for “El Retador”, you commented that criticism about your weight and your body led to depression and anxiety. Did you get past that stage?

My weight stopped being a problem for me a long time ago, around 14 years old I began to accept myself, although internally it was like I’m fat or I don’t like this or that, and a year ago I had the opportunity to undergo a gastric sleeve operation, and I did. Now I feel much better, less tight, I’m not short of breath anymore, my health is almost perfect, I take care of my diet, I try to eat healthy, not to abuse some things. I won’t have curves, everything falls off, I’ll be tight, but I like it and I feel comfortable.

-How many kilos did you lose?

I haven’t weighed myself lately, but I estimate about 25 kilos.

— Was there a moment of breakdown that led you to operate?

Feeling bad for being fat was no longer healthy, I wasn’t comfortable, I wanted a change in my life, in my physique because nothing fit me, not my mom’s or my dad’s clothes that I used to wear. When I left “La Voz Perú” he didn’t recognize me.

─Shaving your head was part of that change?

—By shaving your head you closed Adele’s cycle, what cycle did you close with the gastric sleeve operation?

Change my mind, change my eating habits, now I try to eat well. Due to the operation there are foods that I can no longer consume, like normal milk, pasta, I can’t eat much chicken because I don’t like it, or onion.

—While you took off your dress to stay in your nightgown and interpret “When nobody sees me” dressed like that on the stage of “El Retador”, you said that you chose that song because for a long time you were hidden and you had not been able to be who you really are. Who are you?

Anything is worth it to me, I don’t suck, if I feel comfortable I’ll do it, I started to find myself, to be me and Adele ceased to be my priority. I love the stage with all my being, but when no one sees me I’m just Joaquina, that’s why I decided to take off my dress, with this song I get naked. I am fighting to stop being Adele and being labeled by society that a pretty woman is a straight woman.

I am not a mother and I don’t care, I have a beautiful girlfriend whom I love with all my heart, I also wanted to leave the stereotypes of long hair, short hair, the girdle, I wanted to leave everything aside and feel free. In fact, I tried to do it in “La Voz Perú” when I sang “Todos me miran” and I also took off my dress.

-What song do you identify with?

Once Mauri Stern told me that there are songs that are written for one and that life gives them to you, “When nobody sees me” is one of the songs with which I really identify, because I have been hidden for a long time, but not because I wanted to hide, but because society did not want to open its eyes. I have never been in the closet, I have never kept my comments to myself, nor have I limited myself when speaking.

– What is coming for your career?

I would love to create my own music so that my future is promising, I would like to tell my story well, what I really feel and for that I have to continue living, I still have a long way to go. I also die for acting, as a child I took some workshops and I have participated in plays, but I would love to do some fiction on television, a character, playing someone I am not, would be a great challenge for me.

The Adele of “Yo Soy” who triumphs in Mexico: “It’s frustrating that they only see you as someone’s imitator”