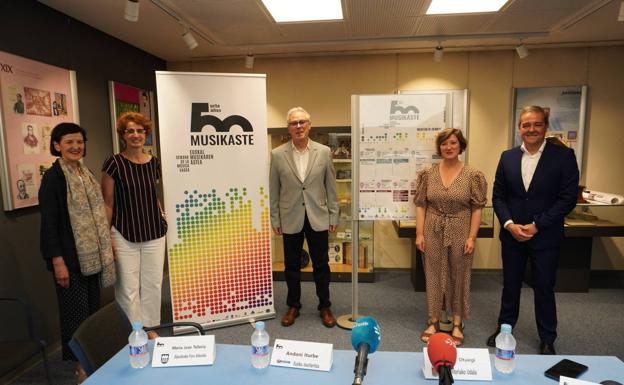 The Musikaste Basque music week kicks off its fiftieth edition tomorrow, Thursday, with a program of ten concerts until the 28th, in which the Euskadiko Orkestra, Iñaki Salvador, Miren Urbieta, Kukai, the Landarbaso and Andra Mari choirs will take part, among others. and Ensemble Kuraia. The performances will take place on different stages in Errenteria, such as Lekuona Fabrika, Niessen Kulturgunea, Madalena Ermita, the Fátima Parish, the Asunción Parish, Koldo Mitxelena ikastetxea and Xabier Olaskoaga Square.

The Eresbil Foundation and the Andra Mari Choir keep alive the ideology that led them to create this event, dedicated to promoting the investigation of our music, supporting creators and performers and disseminating their works, without forgetting dance, recently linked to the festival. Musikaste returns this year to May, its original month, after two editions in which it was moved to October due to the pandemic. And coinciding with its golden anniversary, it does so with a “special program, with attractive and powerful works, and with consolidated performers on the music scene”, as pointed out by the director of the Eresbil Pello Leiñena Foundation in the presentation of the present edition.

The festival will kick off tomorrow with a performance by the duo formed by the pianist María José Barandiarán and the cellist Iagoba Fanlo at Madalena Ermita. They will present a classical program, with works by José María Franco, Antón Larrauri and Beltrán Pagola.

On Friday, Miren Urbieta and the pianist Rubén Fernández will perform a varied repertoire of some of the most representative composers of our musical legacy in the Fátima parish: Jesús Guridi, Andrés Isasi, Antón García Abril, Félix Lavilla and Pablo Sorozabal, among others.

Dance will take over Lekuona Fabrika on Saturday. The Kukai Dantza company and the choreographer Sharon Fridman will present their work ‘Erritu’, a vital journey that traverses through individual and collective rites of passage, the states of life in relation to nature and the community.

The Sunday day, on the 22nd, will include the usual concerts of religious music, txistu and band. The kick-off will be given by the San Juan Bautista Choir, from Leioa, in the Santa María de la Asunción parish. The ensemble will premiere Jon Sáenz’s work entitled ‘The lamentations of Jeremiah’, accompanied by the string group Ensemble Concorde, and will also perform Xabier Sarasola’s work ‘De profundis clamavi’.

The baton will be taken over by the Municipal Band of Txistularis with works by Isidro Ansorena, Roque Ansola, and Tomás Aragüés, in a concert that will be offered at Herriko Enparantza. The final point will be put by EMKE Banda with the interpretation of works by E. Mocoroa, Félix and Julián Lavilla and Joxemari Oiartzabal among others.

The festival will resume on the 24th with a performance by Herri Arte Eskola advanced course students, who will present works for piano, clarinet, percussion and sax with piano. In addition, on the 25th, 26th and 27th there will be concerts in the Plaza Xabier Olaskoaga by the students of Klake+konbo from Herri Arte Eskola; the Musikene jazz group; and the pop-rock group, plus the urban dance group from Herri Arte Eskola itself.

On May 25, jazz will once again be the protagonist with the performance of Iñaki Salvador Trío, who will perform a repertoire with original arrangements by Iñaki Salvador based on songs such as ‘Izarren Hautsa’, ‘Txoria Txori’ and ‘Munduaren esker ona’. There will also be pieces like ‘Alferretan’ and ‘Ezpatandantza de Amaya’, by Guridi, in personal versions with ample room for improvisation. The program will complete original compositions by Iñaki Salvador from different moments of his musical career: ‘Mind, Branka 2’ and ‘Beatus Ille’, all of them collected on different albums of his 40-year creative journey.

The 26th will be dedicated to contemporary music and will begin with the presentation at 6.30 pm of the ‘Kaierak’ Notebook, dedicated to Félix Ibarrondo as a tribute to his long career as a composer. The event will continue with the performance of Ensemble Kuraia, under the direction of Andra Cazzaniga, who will perform works by Zuriñe F. Gerenabarrena, Gabriel Erkoreka, Ramon Lazkano and María Eugenia Luc.

The 27th will be the day dedicated to choral ensembles, with a concert in which the Suhar, Landarbaso Abesbatza, KUP taldea ensembles and the Etxarri Aranaz choir will participate, which is also celebrating its golden anniversary this year.

Musikaste will close on the 28th at Lekuona Fabrika with a symphonic-choral concert by Euskadiko Orkestra and Andra Mari Abesbatza, who will premiere the work by composer Saskia Venegas entitled ‘At the Aegean shores’, written based on her experience at the Lesbos refugee camp. Seven authors will be honored at this event, such as C. Bernaola, P. Donostia, F. Escudero, P. Sorozabal.