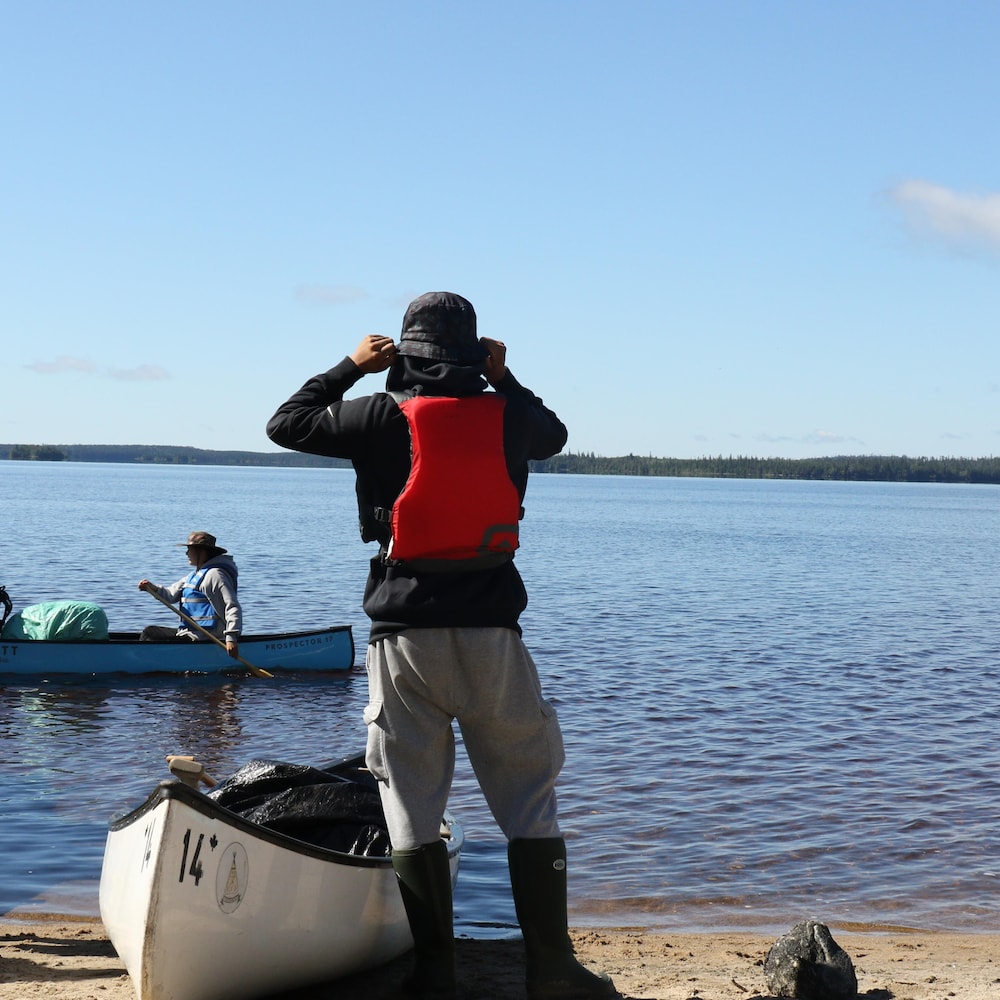 They are young people from the community of Opitciwan, in Haute-Mauricie, who are enjoying the last days of summer. However, the optimism and bliss which hover do not allow the importance of what is happening at that moment to show through.

These young people, from the age of 12, take part in the Tciman (meaning canoe) project, organized by the Opitciwan Social Services. For a week, they canoe through the waters of the Gouin reservoir in the company of elders and other members of their community.

The group must travel about ten kilometers a day before camping for the night and resuming their expedition the next day.

Thirty people, divided into 12 canoes, are taking part in the August 2022 trip.

That’s a lot of peopleunderlines the organizer of the project Martine Denis-Damée, social services worker.

In July, we had fewer participantsshe says.

Martine Denis-Damée took part in the first expeditions of the Tciman project, 25 years ago, when she herself was a teenager.

After several years without the project taking place, she decided to take up the torch and organize it again.

Martine Denis-Damée, organizer of the Tciman project, took part in the first expeditions in the 1990s.Photo: Radio-Canada / Gabrielle Paul

The expedition has also become an opportunity to preserve and bring to life certain cultural practices. There is the canoe, but you can also fish, hunt, pick blueberriesshe lists.

Every day, at the end of the kilometers covered, the young people and their companions must build their camp.

So, as soon as they arrive on the site, which will be occupied for the night, Ashley Awashish and Maggie Petiquay are busy setting up their tents.

It’s not the first time we’ve taken part.relates shyly Ashley with her friend who nods behind her.

They obviously have experience. They place the sapinage, the fir carpet which allows the ground to be insulated, with ease, and their tents are quickly erected.

Even at 14, they demonstrate a certain mastery of ancestral knowledge. There’s nothing to do in the summer and it’s just fun to be with our friendsconcludes Ashley, however.

For the two friends, the project is above all a way of occupying their summer, but for other participants, it is also an opportunity to strengthen the links between the generations.

A few meters away, a canoe has just docked. On board, Jenny Chachai, who at 70 is the eldest paddler, and her grandson Melvin. It’s very hotsays Mrs. Chachai quite simply.

They have just finished their journey for the day under a sunny sky whose heat is amplified by the reflection of the water.

We would have to pitch the tent, but are we going to have room?she wonders, giggling, between sips of water.

His grandson also enjoys the time spent with the other young people and shares a tent with some of them, but during the day he paddles alongside his kokom.

The Tciman project allows Jenny Chachai to spend time in the territory with her grandson.Photo: Radio-Canada / Gabrielle Paul