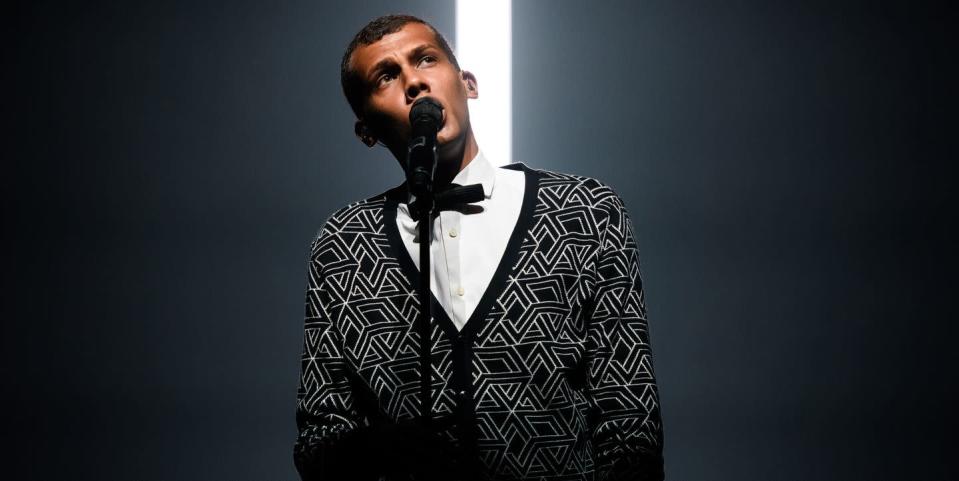 The musical career of Stromae (meaning ‘master’), Paul van Haver (Brussels, 1985) for his inner circle, took off in 2008 thanks to chance and talent. He worked in a fast food chain to be able to pay for film studies, but the savings he got then were invested in his first EP, which was released on MySpace and allowed him to cross borders, seduce characters like Anna Wintour or Nicolas Sarkozy and create hits world like Papaoutai either Alors On Dance.

After that success he ‘disappeared’ for nine years. The reasons bring with them situations that have marked their way of being and creating. The artist suffered, for a malaria contagionexhaustion, depression and a anxiety that led him to write songs in which he openly talks about suicide: “I’ve had suicidal thoughts and I’m not proud of it.” He now sings about social issues and puts himself in the shoes of different characters, after reviewing the music folk of all the world. But they have not been years only of darkness. Now he is a father, he is married and his professional routine is different: instead of working at night, he now composes during “working hours”, from nine to five.

your house is ours
In this interview we talk about his music and the reason for some ‘things’. He invites me to her house while he places the computer on the table. Neither of us is very clear about how Zoom works. Stromae is warm and close. He wonders and explains. But above all he is someone who has never been afraid to say what he feels and thinks.

Nine years later, you’ve given us the record we needed.
For me it has been a relief. It took two or three years of hard work and in the end all the artists went through the same thing: we are restless until we receive the public’s response. But now the album is out and the response has been really good.

In these years you have founded your own company [una marca de ropa] and you have directed music videos for Billie Eilish or Coldplay. You haven’t stopped creating, but what happened to your music and what was the turning point for deciding to make this album?
To be honest, I was a bit jealous of the success of other artists. I started criticizing for no reason, so I thought it was time to start writing a new album, stop being a hater and work. Jealousy motivated me to create crowd.

You come back with more maturity, new energy and new rhythms.
Sometimes when you’re just composing, you boycott yourself thinking maybe you’re wrong, that what you’re doing doesn’t mean anything. In the process of writing this album, only my brother and my wife heard my new music, but it’s hard to be objective with your own work.

Are you aware that during these years of musical inactivity many people were waiting for your return?
When I saw the comments I was surprised by the people who have waited for me these years. Although I don’t know how much truth there is [risas]. You know, I don’t think people have been waiting for years just for me, but I appreciate it. It’s hard for me to understand the new consumption of music: I don’t understand the success of crowd compared to that of Racine Carree, which we sold a lot of physical albums from. Now count the streaming, so success is hard to measure.

In this album you sing a lot about loneliness. Is it in that feeling, which we consider negative, where artists create better?
I write and compose alone. It is the first time that I work with elements of folklore from all over the world: Bolivia, Bulgaria, England, Belgium, China… But at the beginning of the process I am alone: ​​me, my microphone, my speakers, my computer and my table. Sound. Especially when I write the lyrics. I think it’s important to know how to be alone with yourself and question what you do, but sometimes you have to set limits and share it with others. I have talked a lot about this process with my brother and my wife. I remember meetings in the studio where they helped me get the story out of me.

You sing about very difficult subjects. Do you beat yourself up too much?
I’m a bit hard on myself. Something that we should learn and that they don’t teach us in school is to be happy. It seems basic, but it would be very helpful to learn to believe in yourself. I don’t know how it is in Spain, but in Belgium it is not like that.

We know your music and your way of creating, but what do you listen to?
I am a fan of Nigerian singer Buju and his song Finesse. Another one I can’t stop listening to is Free, by Belgian artist Angèle. Let me check my Spotify… Kendrick Lamar and G3 N15 Y Candy, of Rosalia. I met her at the MET gala in May, she’s very nice. oh! Y A bit crazy, by Luis Ángel Gómez Jaramillo, from the soundtrack of Coconut [risas]I’m a big fan of this song!

*This article appears in the July/August 2022 issue of Esquire magazine.

Stromae: “Something we should learn and that they don’t teach us at school is to be happy”


You can view our social media pages here and other pages related to them here.https://kjovi.com/related-pages/