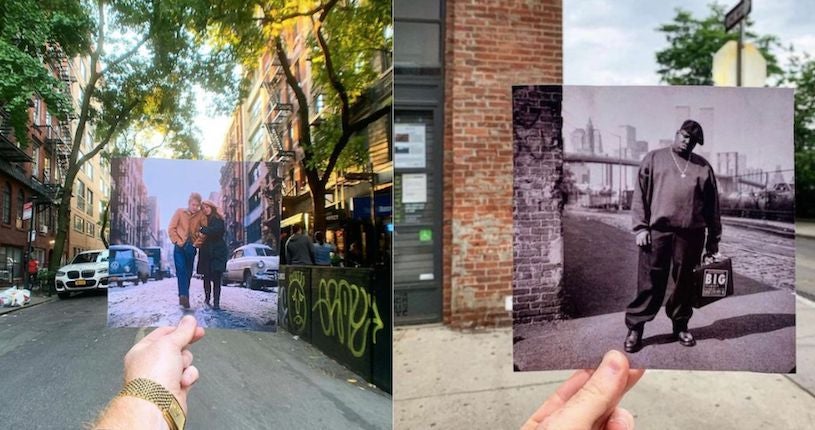 Steve Birnbaum is a full-time documentary filmmaker and musician portraitist in his spare time. His concept: find the places where iconic photos of the world of music were taken. Besides causing a super interesting optical illusion by superimposing the original photo on its current location, it brings together past and present to bring those historic moments to life.

During an interview with Steve Birnbaum, we immediately felt his passion for music. Ranging from Notorious BIG to The Cure, he loves music, in all its genres. But it is particularly the grunge universe of the 1990s in the United States that inspired him. Living in New York at that time, he began to immortalize unique moments at the concerts of bands such as The Strokes or Yeah Yeah Yeahs.

When we asked him what was the message he wanted to convey through his work, he replied:“I don’t want to sound morbid, but I always think about death, about history and how we can be here today and then not here tomorrow. It’s this feeling that I try to convey in my work, especially with iconic photos of artists who are no longer there. We are surrounded by history and I think it is important to remember it every day. I also want to revive these photos by bringing them back to the same place years later.”

His favorite series remains the one he made in Kurt Cobain’s house. Thanks to the rare photos he managed to obtain of the Nirvana singer in 1992, alongside Courtney Love and their child, Birnbaum was able to rekindle intimate moments at his former home. The rocker presented himself in a completely different light: that of an “ordinary” dad, who spends time with his family.

“I found this series overwhelming. I was alone, in this abandoned house with these photos and all the memories seeping through the cracks in the walls, in the cracked floor, in harmony with the windows bathed in sun and dust. It was tangible”he wrote on his Instagram account.

In this case, the photographer already knew where these photos were taken, but most of the time, this is not the case. Unlike the iconic photo of the Beatles on London’s Abbey Road zebra crossing, some photos are taken in front of a concrete wall. Like this one from Jim Morrison, lead singer of The Doors:

For these unidentified places, a great work of investigation is essential. To immerse himself in the artist’s universe, Birnbaum begins by listening to all of his music. To find the exact location, the artist plays Where is Charlie ? full-scale. When he doesn’t have enough information, he will look in concert itineraries, in interviews, documentaries, photographers’ archives… A real investigative work. Sometimes he even goes there feeling and he walks the streets of New York to find the rare pearl (or rather the location).

Once there, it is not enough to place the photo in front of a place. You have to take into account the wind, the rain, the cold, old age (yes, it makes your hands shake) and many more details. But like Steve Birnbaum, when you’re passionate, nothing stops you.

Steve Birnbaum, the artist who hunts down the places where your favorite album covers were shot