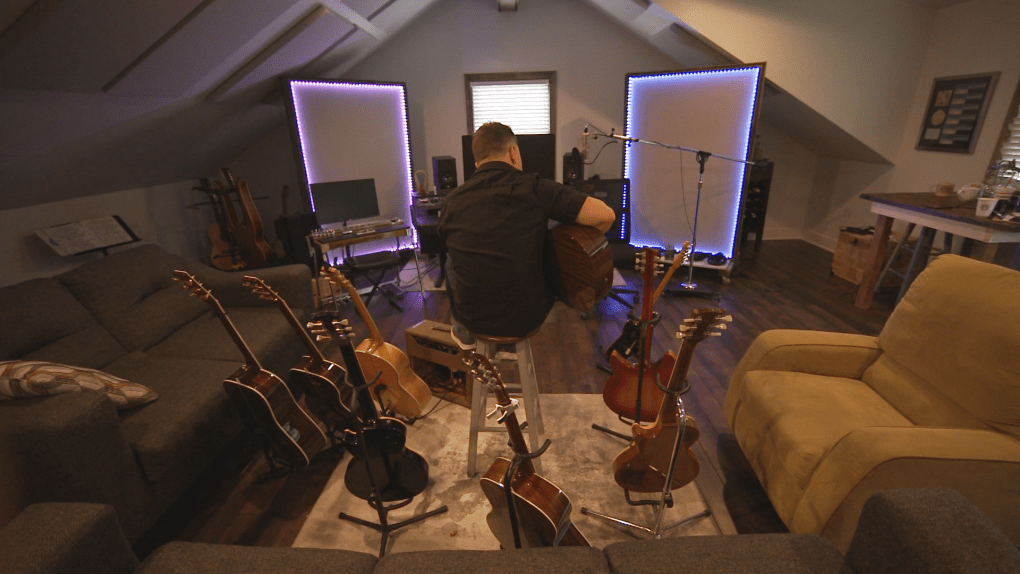 If you write a number one country song these days, it can be worth a million dollars. If you write it with two co-authors, then that million is cut into smaller parts. But it’s still a good chunk of change — enough to help buy a nice house in Nashville.

Canadian songwriter Gordie Sampson is originally from Cape Breton, Nova Scotia and has lived in Nashville for 17 years. He co-wrote some of those number one songs and a slew of top 10 hits.

Even the non-hits are remarkable for the quality of the people who recorded them. Willie Nelson, Martina McBride, Bon Jovi, Faith Hill and Keith Urban. Did I mention Willie Nelson?

Rumor has it that many Nashville songwriters burn out after five years. But Gordie has been churning out hits for nearly two decades. So how does he do it?

He has a theory.

“I haven’t written a song by myself in at least 20 years,” says Gordie from his backyard studio in Nashville. “You start writing with two or three other people and it becomes exponentially awesome because you have this common goal. If it’s a hit song, maybe we can feed our families for a few years.

Gordie says that when you find a great little group of songwriters, good things happen if you “all agree to suck.” This means you agree that you can suggest anything – even if it sounds stupid – and no one will shoot you down. Y’all are trying to turn anything into something stellar.

“For ten things I say, nine of them are — I’m going to sound like an idiot,” he says. “And one of them will be right.”

“Historically, people wrote on their own,” he says from his home in Nashville. “Marty Robbins would write El Paso by himself or Tom T Hall – probably all the songs he wrote – he wrote by himself.”

“But now… most of the time songs are written by three people and that’s kind of a magic number. If you can get three people to all relate to one topic… you have a much better chance than if one person had an idea that was truly personal to them.

After Gordie won a Grammy Award in 2007, the caliber of writers he could regularly work with increased. Songwriters such as Hillary Lindsey and Troy Verges, who have a stack of Grammys, number one hits and even Oscar nominations.

Singer-songwriter and hitmaker Hunter Hayes has a theory on how Gordie elevates songs to hits.

“Gordie is one of the coolest guys to work with because there are no bad ideas,” Hayes says from his Los Angeles studio. “It’s such a sacred thing in a writing room and such a rare thing where nothing is closed. Nothing is laughed at. It’s like a safe environment.

“Everything we tried became something,” says Hayes. “There wasn’t, ‘well, that’s a bad idea – we shouldn’t be doing this. It is not a success. It was making art from such a pure and emotional place.

Gordie also has a knack for writing from a unique perspective – one that seems to come naturally to him, despite being a man: he writes a lot of songs for women and in a compelling way. Or at least that’s what Carrie Underwood thinks.

“I listen to a demo that someone sends me that’s written for a woman and I’m like, ‘This was written by a man,'” she says from her Nashville home. “It’s pretty easy to say because a woman wouldn’t talk that way.”

“That’s never been a problem with any of the songs I’ve recorded that Gordie wrote,” Underwood says. “It’s definitely an observation skill: being able to get inside someone else’s head and think about how a woman might say things.”

” I do not know where it comes from. I just think I write better with girls,” Gordie says. “If I had to guess, I mean, I’m a guy, so songs about guys bore me. I am already one. I think girls think differently. Artistically, they have a different recipe for intelligence when it comes to composing music. It’s just more fascinating to me.

“Women are better than men at being vulnerable,” he says. “When Gordie took a chance with the subject, I feel like female singers are often going to be very receptive to those just because it’s more in their nature.”

“I listen to a demo that someone sends me that’s written for a woman and I’m like, ‘This was written by a man,'” country star Carrie Underwood said of writing Gordie Sampson.

Gordie writes around 120 songs a year. At least 10% of them are recorded by an artist, which is a very good ratio. Especially when you know that he wrote them in less than ten months. Gordie still insists on taking two months off in the summer. Two months to return to Cape Breton and spend time with family and friends near his summer home on Bras D’or Lake.

He says he doesn’t usually work during those two months, but interestingly, a lot of the raw material for the songs comes from that downtime. It’s where he gets the chance to listen to the gossip, stories and real drama he hears at parties, on boats in drugstore queues.

Songwriter for Carrie Underwood, Other Stars, on Her Secret to Making a Hit E! News UK