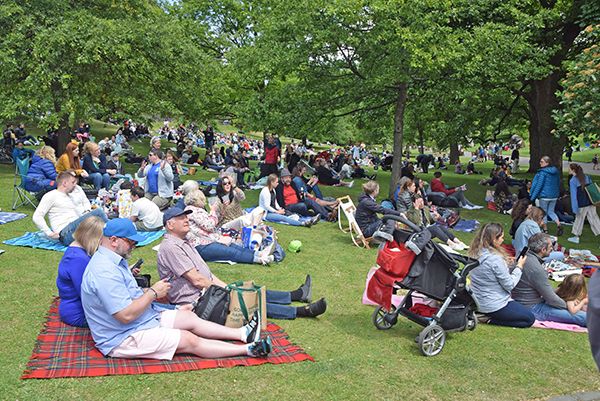 During my stay in Edinburgh, the capital of Scotland, I was in the Princes Street Gardens, a public park located in the center of Edinburgh, at the foot of the Castle of the same name. The gardens were created in the 1820s, following the founding of the New Town and the drainage of the former bed of the Nor Loch located in the center of the capital which was highly polluted, it was a bog but during the Middle Ages it was built a dam to get it turned into a lake.

The gardens are distributed along the southern part of Princes Street (Princes Street) and are divided by an artificial hill built to connect the new and old part of the city of Edinburgh.

The Princes Street Gardens play a major role in the life of the city, serving as a meeting and recreation point for its inhabitants. Likewise, it usually hosts music concerts that are held regularly at the Ross kiosk, as well as other celebrations.

Although there have been Royal Marines bands in Scotland since the late 1930s, they were classified as “ship bands”.

The Band of Scotland is unique in that it is the only Band of the Royal Marines stationed north of London. With their distinctive white helmets, the bands of the Royal Marines are renowned for the quality of their music, their visual grandeur and the precision of their drills. On the concert platform they enjoy a similar reputation, ensuring their continued popularity with the public. The Band’s repertoire includes popular classics, Big Band, exciting contemporary works and entertaining solos. The Corps of Drums brings movement, color and the tradition of the ceremonies of the Royal Marines. Most Band members play at least two instruments and are required to perform in combinations of wind band, marching band, big band, orchestra, and dance band. They are also part of jazz, string and woodwind ensembles, making the musicians in the Royal Marines some of the most versatile and adept at military music.

The band travel extensively throughout Scotland, Northern Ireland and the North of England, and have recently toured abroad to Norway, Gibraltar, Colombia and Dubai. Their regular ceremonial functions include the Royal Edinburgh Military Tattoo, the band retreat at Horseguards Parade, ship launchings, homecoming parades and memorial services. The Band also gives numerous concerts throughout the year in support of charities, both military and non-military, such as Seafarers UK, the Royal Marines Charitable Trust, the Rotary Club and the Royal British Legion.

Like all Royal Marine Bands, the men and women of the RM Band Scotland also play a vital supporting role supporting Fleet during active operations, and several of its members have seen service in Afghanistan and Iraq.

The conductor of the Royal Marine Band is Captain TP Griffin