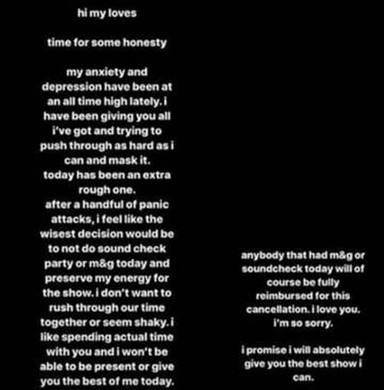 Mental health is the general well-being of the way you think, regulate your feelings, and behave. A mental disorder may be present when patterns or changes in thinking, feeling, or behavior cause distress or impair a person’s ability to function.

Each mental health condition has its own signs and symptoms, but the consequence for many artists has been to cancel concerts or, directly, suspend the tour.

After the pandemic, a survey was carried out to which 400 Spanish instrumentalists, singers and disc jockeys responded and the conclusion is overwhelming and worrying: there are extremely high rates of anxiety and depression. Furthermore, according to another study conducted by Help Musicians UK, 87% of professional musicians say their mental health has deteriorated since the COVID-19 pandemic began.

The singer has commented on several occasions, the aAnxiety that he began to suffer after the attack that left 22 dead and dozens injured during one of his shows in Manchester. After this, he postponed several of his concerts and canceled others. In addition, the death of her ex-boyfriend, the rapper Mac MillerIt left her even more touched. A year after her death, Ariana confessed:

“Hello my loves. It’s time to be honest. My depression and anxiety have been at a very high level lately. I’ve been giving you everything I had and trying to put these problems aside, but I can’t hide it anymore. Today has been It was a tough day. After having a couple of panic attacks, I think the best decision to make was to cancel the meet & greets and save my energy for the show. I don’t want to rush into the decision to spend time with my fans or seem like I’m not comfortable. I like spending time with you guys, but if I’m not able to do my best… I wish I could control these attacks, but as anyone who suffers from anxiety or depression knows, no one can control them.”

In the month of February 2022, the British singer announced the suspension of their concerts in Las Vegas. Through a video published on her social networks, the British artist assured that it was impossible to perform her show because several people from her team had tested positive for coronavirus. But according to ‘The New York Daily’the British singer canceled her last concerts to fix her relationship with Rich Paul and overcome the depression that those conflicts were causing her. In addition, Adele has spoken several times about her Postpartum depression.

The Canadian singer has been very blunt and has not hidden his problems. Last July, Mendes canceled his tour “Wonder: The World”. He said that he didn’t continue because he had to improve his mental health.

“I started this tour excited to finally get back to playing live after a long break due to the pandemic but, the reality is that I was not prepared for how difficult it would be to tour after this time away. After talking more with my team and working with an amazing group of healthcare professionals, it has become clearer that I need to take time that I never took personally, to ground myself and come back stronger. Unfortunately, I have to cancel the rest of the North American and UK/Europe tour dates. We were hopeful that we could continue with the rest of the dates after some much-needed time off, but right now I have to put my health as the first priority.”

The American singer has confessed to suffering panic attacks. What’s more, he suffered one in the middle of the concert summerfest festival 2021. Miley had to stop the concert and said:

“A couple of songs ago, when the lights went out, I turned to Stacy (musical director and drummer), who I’ve known since I was 12 years old, and told her I felt like I was having a seizure. Like everyone else, for the last year and a half I have been isolated. It is very impressive to be back in a place that used to feel like a second home. I don’t feel that way anymore because of all the time I spent at home locked up. I know this has been very drastic. It is an alarming and terrifying situation, and getting out of it is also somewhat scary. I want to be honest, because being honest also makes me feel less afraid. We’re allowing people to see us at our most vulnerable, isolated, hurt and scared, and I think that’s empowering. I’m getting used to being on stage again, because there’s nowhere else I want to be.”