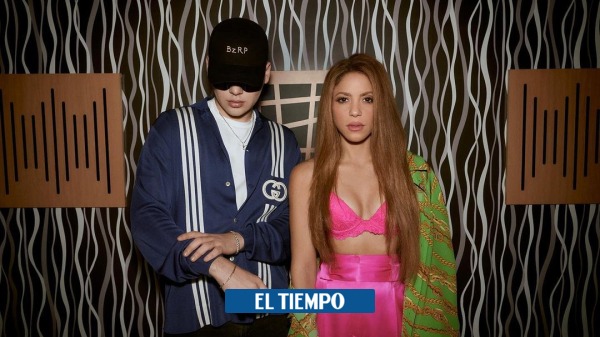 The honesty with which Shakira Mebarak Ripoll addresses the breakup of her marriage in producer Bizarrap’s 53rd session is visceral and heartbreaking. The characteristic blue color of the studio of the Argentine urban producer is, in this case, particularly important, because it is inhabited by the most important Colombian musician in the world.

During the following minutes of the session, Shakira executes her ex-partner with a series of comparisons, insults and claims that have nothing to envy to the most gangster women of global rap. As in any hip hop street battle, car and watch brands are not spared for scathing comparisons between the global superstar and her nemesis:

“I’m too big for you and that’s why you’re with someone just like you,” she sings calmly and firmly, while reaffirming her power as a woman regardless of her age: “I’m worth two out of 22,” she adds, and continues: “You traded a Ferrari for a Twingo, you traded a Rolex for a Casio, You go fast, go slow, a lot of gym, but work your brain a little too ”.

Brand community managers react quickly. Renault Spain speaks out on Twitter to defend its cart: “For guys and girls like you. Turn up the volume! #renault #twingo #clearly”. Casio’s educational division, for its part, also defends the iconic watch caught in the crossfire of the largest tusa in the Hispanic world: “Today we have enough notifications for a mention of Casio in a song. Casio watches and keyboards are for life”. The official account of the watches is less diplomatic: “We may not be a Rolex, but we love to get splashed” (Piqué responded with an appearance on the King’s League twitch, where he announced that Casio was his new sponsor, adding: “This watch is for life.”)

Reactions like these on social networks are immediate and forceful: memes, digital analysis, music radio stations, news, television channels, tweets, fan clubs, influencers and tiktokers pounce on the most dramatic episode of the personal life of the singer from Barranquilla turned into a song to participate in it and make the most of its impact. The currency with which the discussion is paid is the like, the comment, the hitch. The video is reproduced 50 million times in 24 hours, becoming the Latin song to debut with the highest number of views on that platform in its history.

The truth is that if you had no idea who Bizarrap was, now you know.

(You may be interested in: Bad Bunny: the great equalizer of taste).

But the success of the song does not stop there: last Friday, Bizarrap became the first Argentine artist to reach number one on the global top of Spotify and the song with Shakira is now the fifth biggest debut in history, with 14.39 million views on the platform. His song with the Spanish Quevedo, which was number one on that prestigious list for several weeks in 2022 —and which three weeks after its launch on that channel in July last year already had 88 million views on the platform—, continues occupying position number 13 on the list.

Some observers of the music industry in Colombia say that releasing the song on a Wednesday gives Shakira significant traction over the other releases of the week, which are standardized on Fridays. “The strategy of the big artists is to release songs on Wednesdays, to add the accumulated numbers of that day and of Thursday and Friday,” says an industry source who prefers not to give her name. “That way, when Friday rolls around, you’re ahead of all the pitches that come out that day.”

The truth is that if you had no idea who Bizarrap was, now you know. The young former Argentine record promoter turned producer has 17 million YouTube subscribers who have been watching the famous sessions for more than three years, characterized by their homemade visual nature and close-ups of the musicians doing them. bizarre (given name Gonzalo Conde), always remains in the background, like an accessory to the rapping star. What to some experts is mediocre, low-quality billing with basic, vulgar music content, to new generations is an intimate look at a phenomenon known as the ‘bedroom producer’: a young, enterprising new musician aided by computers, software, keyboards and a sensibility that oscillates between spa electronics, hip hop and reggaeton. Said phenomenon of the young man who began to make beats in his room at home dreaming of becoming famous, was very popular in the United States and Canada more than a decade ago, it created enormously viral phenomena such as Frank Ocean, The Weeknd and the DJ, the producer Kaytranada and the consolidation of low fidelity hip hop (lo fi beats).

That look begins to become a promise when the sessions generate their first controversies. The first of them, the rap that Residente dedicated to J Balvin, generated an intense conversation on social networks that produced a crisis in the public image of the reggaeton singer from Medellín. As the needle begins to move in digital conversations, the home studio begins to become a symbol of street legitimacy, DIY aesthetics, and musical credibility. Suddenly, and after the participation of artists like Nicky Jam, Paulo Londra and Anuel, and the overwhelming success of the session with the Spanish Quevedo, the little blue studio became a sacrament of generation Z.

Shakira’s session with Bizarrap is Latin pop on steroids

But, even with its 17 million subscribers and fierce social media activity, many people had no idea who Biza was until Shakira appeared this week at session 53. Armed with irrepressible charisma, hip hop gestures and the beauty emitted by women with power, Shakira brings to Bizarrap an exceptional iconography: if the queen of Latin Pop is there, it will be for a reason. Likewise, the effect of Biza as a platform for new music consumers legitimizes Mebarak in an audience reluctant to the novel sensibilities of her discography, closer to a colloquial, challenging, fast language, loaded with ego, courage and sensuality. Shakira’s presence in the Biza studio makes him an icon; her harrowing session, whose festering content becomes an invasive manifestation of virality, transforms her into a legend.

Shakira’s poisonous and powerful string in session 53 is, for many, an exorcism through music. For others, an unnecessary tantrum. But it is not the first time that a love scandal has become an inescapable musical work: Fleetwood Mac’s album Rumors, published in 1977, is the painful summary of the sentimental breakup of its members Lindsey Buckingham and Stevie Nicks, and songs like Go Your Own Way, Second Hand News and Never Going Back Again are an unforgettable part of the best repertoire written and sung in the seventies. On Go Your Own Way, singer Lindsey Buckingham opens the song by confessing that “loving you is not the right thing to do”, and later on the backing vocals are provided by his own wife, who is unfaithful to him with drummer Mick Fleetwood, and he sings in Dreams that “thunder only happens when it rains”, that “players only love you when you play” and that “women come and go”, while Buckingham gives him one of the saddest guitar solos in history.

Alanis Morissette’s Jagged Little Pill, from 1995, had You Oughta Know a song whose lyrical disruption, obscene and incorrect, was censored by radio and MTV at the time by explicitly confronting an ex-partner about who was the better lover: “ An older version of me, is she perverted like me, would she go down on you in a theater? here I am, to remind you of all the mess you left behind when you left”, with which he won the Grammy for album of the year and managed to sell 45 million copies, the best-selling album of the 1990s. And how to forget Lemonade from Beyoncefrom 2016, an entire album about the infidelity of her husband Jay Z, in which, among other things, she compares him to her father in lyrics like: “You are part of the lineage of the men in my life, who arrive at 3 o’clock in the morning to tell me lies”.

With only 40 seconds of publication, the topic already had 2.8 million views.

Seen without passion or favoritism, Shakira’s session with Bizarrap is Latin pop on steroids, a perfect combination of therapy in which celebrity status does not prevent her from delivering an intimate and personal story, which will inevitably involve a global audience. But she is also part of an aggressive promotion plan, which closes a trilogy of songs written with a young man from Cali named Keityn, known within the Latino recording industry as ‘El genio del lápiz’. Both Monotonía with Ozuna and Te Felicito with Rauw Alejandro are part of the repertoire that Kevyn Cruz has put together with Shakira in less than a year. “A lot of those songwriting processes are done through ‘camps,’” says another music executive (‘camps’ are gatherings of songwriting and producer teams whose purpose is to write songs for a great artist). “The artist has already pitched him, that is to say: he has explained to the record label or the publisher what kind of music he wants. They do a first round without the artist and later they show him the result of that field. At that point, the artist decides which songwriters and producers to move forward with. This is done by artists like Enrique Iglesias, Nicky Jam and Shakira”.

Chances are there haven’t been many meetings or camps around this particular song. “Bizarrap does not go to these types of meetings. But Keithin does. Everyone calls Keityn”. When reviewing the repertoire composed by this sought-after Colombian composer, songs like Tusa and PROVENZA by Karol G, Hawai by Maluma and the controversial Perra by J Balvin with Tokischa appear on Spotify, among a hundred more songs popular with new audiences. .

(You may be interested in: Björk: Psychology, mushrooms and music).

All the maneuvers described to reinvent himself in an increasingly complex and capricious business, and their indirect connections to past scandals, breakups, and heartbreaks only demonstrate a level of impeccable professionalism. Jeff Beck of the Yardbirds, one of the five greatest rock guitarists of all time, passed away this week. U2 released a reheated version of their 1984 hit Pride (In The Name Of Love) and Elvis Presley’s daughter Lisa Marie died. They were all big news. But none achieved the impact in the public conversation as Shakira did with a song. In that painful path of transformation, in which they shed skins from the past and live in new textures, no matter what they say, the great artists measure themselves. Bob Dylan once sang a famous phrase: “he who is not busy being born, he is busy dying.” He happens with the artists: those who are not born again are dedicated to dying slowly.

This is not the case with Shakira, Shakira is more alive than ever.

listen to the podcast

Listen to Alejandro Marin in it Bilingual Podcast on Spotify and on Apple Podcasts and on The X, More Musicand see it in channel thirteen every Monday at 10:00 p.m.

– Piqué responds to Shakira and in networks they do not forgive him: the best memes

– The biggest rock band in the world that nobody knows

– Shakira talks about the success of her new song: ‘When life throws you lemons…’

– Shakira: Put the happiness of your children in the foreground

Shakira and the battle for relevance / Analysis of Alejandro Marín