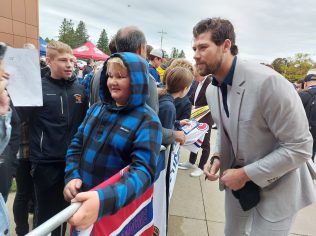 Saturday morning’s gloomy weather did not dampen the festive atmosphere that reigned at the entrance to the JK Irving Center in Bouctouche, as a few hundred fans awaited the arrival of the Ottawa Senators and Montreal Canadiens. Montreal.

Players from both teams enjoyed a crowd bath before entering the amphitheater and holding their training session for the evening’s game.

A few school buses had left Elsipogtog around 7:30 a.m. Saturday morning in the direction of Bouctouche. Many of the First Nations community were waiting for the players to arrive.

In fact, people came from all over the Southeast, divided between the colors of the Senators and the Canadiens.

Lise and Danny Saulnier from Sainte-Marie-de-Kent were happy to be there. They got up at six o’clock so as not to miss anything.

Denis Dallaire of Cocagne wore the colors of the Canadiens. He was outside the entrance to the JK Irving Center to see his favorite player, Cole Caufield.

Simon Richard of Bouctouche, himself a Peewee AA level hockey player, had come to see his favorites, including Cole Caufield.

Just nearby, Julien Martin and his parents, Sylvette and Dean Martin from Baie-Sainte-Anne, got up at five o’clock to hit the road and go to Bouctouche. They even won tickets to watch the evening game. They were in the draw for New Brunswickers.

“There were just 19 tickets drawn. We were lucky,” said Dean Martin, whose idol is Guy Lafleur.

Anthony LeBlanc of Moncton was accompanied by his father, Luc LeBlanc. Anthony wanted to see his favorite player, Cole Caufield, because he’s short and has a good shot, while his dad prefers Arber Xhekaj “because he’s big and fat.”

Near the LeBlancs, Ronald and Melissa Thébeau from Aldouane were also waiting for the players to arrive. The four have in common to be supporters of the Montreal Canadiens. Ronald Thébeau wants Cole Caufield to score 50 goals this year. The Thébeaus arrived on site at 5:30 a.m. “We were the first,” they say in unison.

Luc Mazerolle of Sainte-Marie-de-Kent, supporter of the Senators, was with his son Yanix. They were able to get their hands on the tickets to attend the morning practices. The dad met his favorite player in person, Braeden Tkachuk, who passed very close to him. Former Canadiens fan Luc Mazerolle changed teams when the Habs traded star goaltender Patrick Roy.

Moncton’s Orélie Roy takes for the Senators and her favorite player is Thomas Chabot. Saturday morning, she was with her little brother Émile and their parents.

Ken Therrien from Saint-Antoine and his spouse Émilie awaited the arrival of the players with their family.

Dianna Levi, a lady from Elsipogtog, was really excited when she saw the Senators players who passed by her to talk to her and sign autographs. She and her five-year-old son Isaiah Augustine will attend the National League pre-season game as they were lucky enough to win tickets.

Buffy Ward of Elsipogtog was also in the mood for the arrival of Claude Giroux from the Senators.

Raymond Goguen de Cocagne was with some members of his family, including his grandson Caleb. They were waiting for the Canadians to arrive. They also had the opportunity to have their picture taken with the Canadiens’ star player, Brendan Gallagher.

Jean-Claude Gallant from Saint-Ignace was really proud to be present. Several Sainte-Flanelle players autographed his red Habs jersey. “It’s exciting, everyone is excited,” added Yanick Gallant of Dieppe, Jean-Claude’s nephew. They too will attend the match between the two teams.

Mark Schmitt of Bouctouche, formerly of Toronto, managed to get some of his hockey cards autographed. He describes himself as a hockey fan. 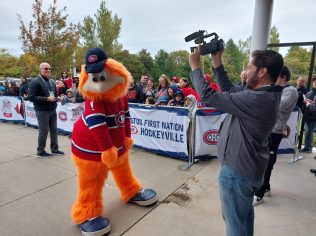 Met inside the JK Irving Center for Senators training, the mayor of Bouctouche, Aldéo Saulnier, savored the present moment. “When we planned this beautiful building 12 years ago, we never thought we would see National League teams in Bouctouche. Today we see that thanks to the victory of Elsipogtog who was able to bring it here. It’s a win-win for both communities,” he comments.

This is the first time a First Nations community has won the Kraft Hockeyville contest.