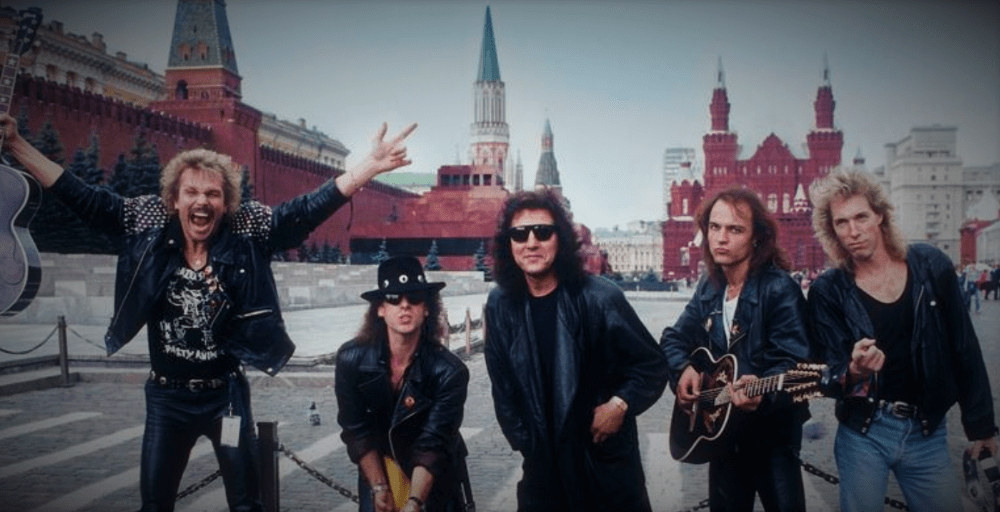 Without a doubt, this musical work brings us to an immediate association when talking about the fall of the Berlin Wall in Germany, did you know that this song was made before the fall of the wall and was practically a prophecy of what was going to happen? Many believe that the United States Government played a dark role in the creation of the song “Wind of Change” by the Banda Scorpions, of which there is also a Spanish version.

During all the time that the socialist regime was maintained over the Soviet Union, music in general was censored, manuals were created that both musicians and composers should follow so that their music was approved and was not against socialist values ​​without inciting rebellion and freedom. They could be intimidated at night by the secret police, beaten, jailed or disappeared and whatever music promoted, the western lifestyle was forbidden for Russians. Censorship reached absurd levels, for example, Elvis Presley was the leader of the outlaws, bands like Kiss and Ac Dc, were equivalent to the greatest aberrations, Julio Iglesias, for example, was banned for being a fascist and Tina Turner for being too sexy.

Due to these censorships, for many years, Russians could not enjoy concerts of the world’s great artists, which was a terrible thing for music lovers. However, in 1985 a different politician, “Mikhail Gorbachev”, came to power during his government and thanks to open policies such as “perestroika” and “glasnost”, the Soviet Union began to open up to the world and little by little were raised. little many of the prohibitions of the past.

Rock had been banned in the Soviet Union for decades, but now, thanks to Gorbachev, Russians will be able to enjoy their idols live. One of the groups that were censored and that managed to play for the first time was the legendary German band Scorpions, who in 1988 went to Russia and gave 10 concerts in Leningrad. The success of these first rock bands was so great that the authorities The communists even organized for the following year, 1989, a 2-day festival with several famous hard rock & heavy metal groups, “The Moscow Music festival”, in which Bon Jovi, Ozzy Osbourne, Cinderella, Skid Row, Mötley performed. Crüe and again Scorpions.

During this historic concert, Scorpions vocalist Klaus Meine had a revelation, a moment of inspiration, because of what he was seeing and witnessing, for a moment, the singer was overwhelmed by the crowd of festival goers, they were close to 200,000 young Russians enjoying the music, delighting in something that just a couple of years ago was impossible and not only that, at one point Klaus could see how the Soviet soldiers who guarded the security of the event, threw their caps in the air, left their serious faces and they sang the songs joining the crowd, something that in years past was unthinkable and that would have cost them their jobs and perhaps even their lives. Klaus became aware that he was living something historic and now the winds of a truly profound change were blowing.

The singer also thought, if that was possible in Russia, perhaps it would also be possible that in his country, Germany, the hated Berlin wall, which separated society in various aspects, would be demolished and, finally, be able to play in the East Berlin.

A few days after that historic concert, in September 1989, Klaus wrote, Wind of Change, trying to reflect that feeling of social change and longing for freedom that he perceived at the concert. The lyrics, in fact, are totally related to Russia, since its first verses say that the character follows the Moskva River heading to Gorky Park, emblematic places in Russia.

Some years later, Klaus declared when remembering those moments, it was as if the world was changing before your very eyes, we live very strong emotions, what we saw in Leningrad in 88 and in Moscow in 89 was a strong feeling of hope of that the world could change.

For better song. “Wind of change” was composed in September 1989, And just 2 months later something incredible happened, on November 9, the winds of change reached Germany and rang the bell of freedom, the civil population in a peaceful way, Without spilling blood or firing a weapon, he brought down the Berlin Wall, which divided the German capital for almost 3 decades, this meant the reunification of Germany and marked the end of the Cold War.

The members of Grupo Scorpions could not believe what was happening and the most incredible thing is that the lyrics of their song seemed to come true, the song had been a prophecy for their own country, at that time, Scorpions had already recorded it, but still had not been released officially, a few months later, when they were making the video clip, they decided to use the scenes that became famous throughout the world, the German citizens demolishing the wall with their bare hands, it is for this reason that the song became a kind of anthem of peace, reunification and freedom, those images also contributed to people associating the song mainly with the fall of the Berlin wall and not with Russia, which was the country that inspired the music play. This was included in the band’s 11th studio album entitled “Crazy World”, which was published on 11/06/1990, immediately, the song became a worldwide success and surpassed “Still loving you”, until then, the most popular song of the band.

“Wind of change” reached number one on the charts in Germany, France. Austria, Holland, Norway and Sweden. In the US Billboard ranking, its best position was number four and in the UK ranking it reached position 2, with estimated sales of 14 million copies sold worldwide, “Wind of change” is one of the best-selling singles of all time, holding to this day, the record for the best-selling single by a German artist.

In 1991, the band Scorpions, as a thank you for the opening of music, gave Gorbachev a gold record of the album and USD$70,000, of the royalties generated by the single, the Government reported at the time that the money would be for children’s hospitals. As the song had been inspired by Russia, Scorpions also recorded a version in Russian, with apologies to the Russians for the pronunciation, then, in order to have a global reach, they also recorded an excellent version in Spanish, entitled “Viento de Cambio” , where an almost perfect pronunciation of klaus Meine stood out.

Another important curiosity of the work, many years ago a strange theory circulated that the song was actually planned, written and produced by the US Central Intelligence Agency, “CIA”, as a strategy, as an ideological weapon to destabilize countries. communists, due to this crazy theory managed to interview Maine, the lead singer of Scorpions, who said about it: “it’s a fascinating and entertaining idea, but it’s not true at all.