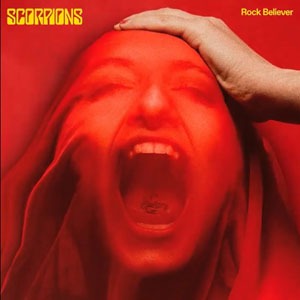 Few bands can say that their popularity has transcended the tyranny dictated by fashion and stylistic limits to end up becoming a musical icon of pop culture worldwide. I don’t think there is anyone in the Western world who at some point in their life has not heard a theme from the protagonists of the following lines: SCORPIONS. Acclaimed as essential references of hard & heavy, treasuring millionaire sales, publishing acoustic records, with orchestras, authors of timeless ballads and hymns…, all this and much more is the legacy that the Germans leave us after more than half a century of existence…, and the story continues. It seems unbelievable that after so many years a new work by the Germans continues to arouse the expectation of their unconditional fans, and that is “Rock Believer”; It is the first studio release that they record together with their “new drummer”, Mikkey Dee, who replaced the American James Kottak at the end of 2016.

But the incorporation of the charismatic Swedish percussionist is not the only novelty that this nineteenth studio installment of the Hannover combo offers us, since a noteworthy detail with respect to their previous “Return To Forever” from 2015, is their commitment to a more organic and less synthesized, something that favors the punch of songs that, on the other hand, have seemed tremendously honest to me. And it is that I think it would have been very easy for them to enter the studio and collect a handful of energetic and vibrant riffs along with some selected high registers of Klaus Meine, something that would surely have fascinated their fans and would have allowed them to complete an effective “ lab disc. However, the quintet has opted for a collection of compositions in which agile themes coexist, several mid-tempos and, of course, a few ballads. Although, yes, all the content of “Rock Believer” can be defended with total conviction by the band, both in the instrumental and vocal sections, something that may seem silly, but that takes on special relevance if we take into account that the duo made up of Rudolf Schenker and Klaus Meine has already passed their seventies. Another aspect to note is that the change in plans caused by Covid-19, -the album was initially going to be recorded in Los Angeles with Greg Fidelman, and has finally been recorded at the Peppermint Park Studios in Hanover with Hans-Martin Buff-, has caused the sound of plastic to have a more European orientation.

A lesson that the Germans learned a long time ago is that: “He who strikes first, strikes twice.” So his new installment opens with a killer and absolutely winning cut such as “Gas In The Tank”, which, without relying on an excessively accelerated tempo, does preserve the strength, essence and, above all, the hallmarks of the song. line-up, maintaining the intensity and freshness during the verses to let a catchy chorus finish off the cut supported by the resounding dynamism of some contagious and vital riffs. The rock enthusiasm together with the invitation to debauchery and fun will remain latent throughout the carefree “Roots In My Boots”, which happens to be the umpteenth declaration of intentions of some SCORPIONS who have never denied their rock affiliation and their predilection for energetic and infectious guitars, as reflected in their striking solo development.

It would be absurd not to admit that the Germans have looked back on more than one occasion throughout this “Rock Believer”, so we can see certain parallels with old favorites. Without going any further, both the riff and the setting of the upbeat “Knock’em Dead” will inevitably remind you of one of his enduring classics “Big City Nights”. After a very lively and electric start, in which SCORPIONS make it clear with compelling arguments that their sting continues to store a highly infectious poison, the time has come to lower the speed level in order to somehow change the approach that the album had taken up to this point, since if the first cuts had served to reconnect with the SCORPIONS more tenacious and seasoned, it will be throughout “Rock Believer” itself, when the band demonstrates that it has not lost its sense of smell when it comes to elaborating those highly catchy mid-tempos of melodies and choruses that have enough potential to become hymns of stadium.

The guitars will become less punchy during “Shining Of Your Soul” resulting in a more eclectic and enveloping atmosphere, which at times seems to transport us to the late 70s or early 80s. A similar feeling is conveyed by “Seventh Sun”, with the rhythmic section holding the cut to create the mattress on which Meine will recite his verses, -with some parts with split voices-, while granting small windows to let some guitars emerge that little by little will gain prominence to bring to mind aromas of Another essential classic such as “The Zoo”.

The sound of the guitars will change drastically, becoming more resounding and hesitant, to give shape to “Hot And Cold”, with which the quintet will travel again through clearly hard rock paths, and where that chorus that invites move your feet while chanting. Who said simplicity can’t be attractive? As well, SCORPIONS they will speed up the pace even more to make “When I Lay My Bones To Rest” sound like a resounding and accurate rock n roll, without more labels or surnames: direct, lively, lively, playful and with an implicit invitation to fun.

Another one that draws attention for its voluminous riffs is “Peacemaker”, where we also find in the choruses some of Meine’s most scratchy vocal lines, turning the piece co-written by Rudolf Schenker and the Polish bassist Pawel Maciwoda in one of the most powerful and brilliant songs on the album. “Call Of The Wild” seemed to me rather less inspired, with a robust and sequenced riff of nineties essences, but it sounds quite flat despite the melodic solidity of a chorus that, like a mantra, will stay spinning in your head after so much just a couple of listens. Obviously, the ballad could not be missing. And if throughout this review a servant has been establishing connections with classic pieces from the band’s past, it will be during the first part “When You Know (Where You Come From), with that peculiar and familiar arpeggio, when it comes to us to memory the sibylline “Wind Of Change”.

The strength, attitude and eighties heavy metal will be back with “Shoot For Your Heart”, making it clear that SCORPIONS they still have arguments to stir up their unconditional supporters. Equally powerful, although leaving what we could call its comfort zone, “When Tomorrow Comes” sounds, marked by passages with filtered voices while the rhythm section remains very much in the foreground along with some choral arrangements that give it a more modern orientation. That riskier and more contemporary side will also reach “Unleash The Beast”, commanded by guitars with darker essences and by some supporting voices that will cause the song to lose some punch, despite the remarkable solo exercise of Matthias Jabs.

“Crossing Borders” seemed much more inspired to me, which, with its southern aromas, gives a special touch to a direct cut with an easy chorus, one of those that instantly wins you over. The final climax will be provided by the acoustic version of “When You Know (Where You Come From)” which leaves us with Klaus Meine giving us an emotional interpretation with which he ratifies, once again, that he is one of the best balladeers of the history of hard & heavy.

We all know that time does not pass in vain. Obviously, I don’t think anyone expected at this point that SCORPIONS bill their best album. But, in any case, what must be recognized to the Germans is that after two years of “pandemic drought”, they still have courage and desire to risk it and present new songs that serve as “ammunition” for their “endless farewell tour” . In short, all of you who have seen the band in recent years will agree with me that “Rock Believer” is above all an honest album in which SCORPIONS they have chosen not to embellish or tweak the songs excessively to offer us a collection of compositions that they can defend live.

HAMMERFALL CD Review – Hammer Of Down