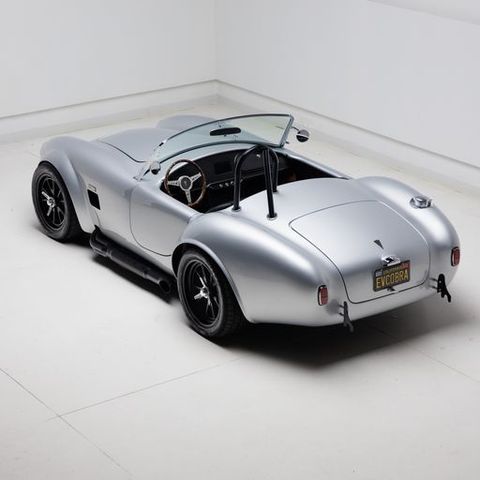 We can say that maybe this all-electric future they’re talking about isn’t so bad after all. In fact, it could be downright exciting. Consider the ScorpionEV battery powered. It is made in Temecula, California from a Factory Five Racing Cobra. Scorpion company adds a Tesla powertrain along with some proprietary drivers and software. The version I drove generates 600 hp and reaches 100 km/h in 2.4 seconds. The indicated autonomy is 645 kilometers. And now they are in production, with a price that starts at 185,000 dollars, about 189,000 euros to change.

There are more and more on the market

During this time you may have seen articles about other Electric Cobras. Superformance showed off one of its Cobra Mk IIIs that GoTech Engineering in Florida had converted to an EV. However, this model only offered a range of 160 kilometers and production has proven difficult to cover. There’s also an electric version of the Factory Five Racing Mk4 Roadster, but it’s a kit you have to build yourself, while AC Cars in the UK will sell you one of their Cobra Electrics for £169,000, or Everrati one of their Superformance GT40s.

Given these examples, Scorpion seems to be ahead of its competition, which is surprising for a company founded in 2019. “We are not trying to replace the original format of this vehicle,” said the company’s founder and CEO, Guilherme “Bill” Cardoso. “What we’re trying to do is show what the next generation of this platform looks like.. Shelby in the ’60s innovated by choosing what became an iconic A/C body in England, brought it to America, and put in a Ford 289 or 427 engine to make this car ridiculously fast. So what we’re doing is the next generation of that, and the next generation of speed and performance is an electric motor.”

Both the electric motor and the battery are from the Tesla Model S. The drive unit I drove is located on the rear axle and drives the rear wheels. A future Scorpion EV model will have motors front and rear. “The center of gravity of this car is good,” said Cardoso. “The driver already sits so low that we didn’t have room to put the batteries on the floor (like in the Tesla Model S). So we used SolidWorks, which is a CAD program for mechanical design, and designed a front and rear box and ran finite element analysis simulations to properly balance the car 50/50.” That required splitting the battery pack in two to balance the car. Likewise, the independent rear suspension had to be redesigned to accommodate the generous Tesla motor.

“So first we did all this engineering work on the computer, we did all the simulation. And then we waterjet or laser cut all the parts, TIG weld them, and then we put them together and assemble them.” From there they can assemble a car in about two weeks. “We are shipping vehicles now with a lead time of 90 days. That means paint jobs, bodywork, testing and everything else.”

But this isn’t just a Tesla motor in a Factory Five Racing body, there’s more. Cardoso has a Ph.D. in electrical and computer engineering from IIT. “The Tesla, you can’t really pull a Tesla and just use all the electronics, there are a lot of proprietary handshakes that happen. Y I really wanted to have as much control as possible and be able to adjust things to my liking”.

time to put it to the test

At the beginning of my test with the Scorpion EV, the power was limited to 600 hp. Naturally, I went full throttle. Now either it had great throttle control or there was sophisticated traction control acting up. “There is no traction control”Cardoso said. So I have great throttle control. In any case, the rear tires spun, but not out of control. It was fast, but not like a Rimac Refrigerator, Pininfarina Battista, or even a Tesla Model S at its most powerful. A bit of throttle modulation kept the Scorpion EV in line as it picked up speed. I wasn’t timing, but it sure felt like at least 3 or 4 seconds from 0 to 100 km/h; maybe not as quick as the 2.4s Cardoso claims, but it may come with even better throttle pedal control.

Remember, it’s not just a Tesla powertrain taken out of a Model S and put into this thing. You can’t hack a Tesla. “That is very difficult to hack. I’m not saying it’s impossible, but it hasn’t been done yet. What has been done, people picked up the whole car, and put all the wires and all the sensors and the ECU and everything else from a Tesla and then just put it on a different chassis. That has been done. But then again, that’s not the idea for this car. You want it to be as agile and light as possible”.

So, was there a lot of work involved? “It was a lot of work, yes. There’s a lot of intellectual property on the car when it comes to integrating all these different parts.. Putting an LS or a Coyote on a different platform, you can’t just go to YouTube and find 50 other guys before you who’ve done it. There’s a lot of EV integration. Even for OEMs, this is still in its infancy, there’s a lot to discover along the way. And we also don’t benefit from 100 years of automotive experience the way gasoline internal combustion does. There’s not a wide range of experts that you can call up and ask them to say, “Oh yeah, connect this dot.” So it’s a lot of reverse engineering, a lot of understanding of how the different pieces come together to end up in a package like this.”

A little more driving in an industrial zone with no traffic reveals that the car is sporty, agile and light. Cardoso says that he weighs 1,180 kilos, including the battery pack. I ask if it gets heavier when the battery is fully charged. He laughs. Electrical engineering humor. So, he decides to reduce power and activate regeneration using his mobile phone: “Fifty horsepower is more than enough for this car,” he said. It’s like a valet mode, or a teen driver mode, or a maximize range mode for him. Actual range could be as high as 500 miles, given the lightweight bodywork and overall efficiency.

How does Cardoso know that there is a market for another electric Cobra that costs $185,000? “In the beginning, you wanted to build one for yourself, right? And I started with that idea in mind. And when I started making it, a friend of a friend of a friend came up to me and said, ‘Hey, can you make me one too?’ And I thought, ‘Well, wait a minute, if two guys in the world want it, there might be a few more who want it. So the spark was lit to make more cars, and little by little I’m finding more and more people who are really interested in the project.” So far they have delivered seven units and have plans to manufacture 25 to 50 in 2023.. If you are interested, please contact ScorpionEV. And enjoy the future.

The best to take care of your car

Mark Vaughn
Mark Vaughn grew up in a Ford family and spent many hours holding a trouble light over a straight-six miraculously fed by a single-barrel carburetor while his father cursed Ford, all its products and everyone who ever worked there.
Borja Diaz
Specialist in engine and technology issues.