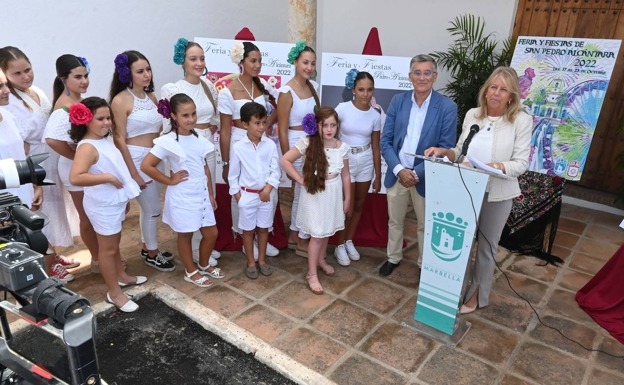 Presentation of the Fair and Festivities of San Pedro Alcántara. / josele

The festivities in honor of the Patron Saint will begin on Monday, October 17 with a parade of giants and big heads

San Pedro Alcántara will celebrate the Fair and Festivities in honor of its Patron Saint from October 17 to 23 at the new fairgrounds located on the La Caridad estate. The mayor, Ángeles Muñoz, and the deputy mayor of the urban nucleus, Javier García, have presented the program prepared for this week. “A program has been designed for all audiences, with a musical offer led by performances by María del Monte, Café Quijano and Antonio José, and with the prominence of local artists, choirs and dance schools,” Muñoz detailed.

As novelties, instead of the traditional cavalcade there will be two parades (on Monday a parade and on Friday, with buggies, horsemen and rocks). Children’s days have been scheduled (a children’s afternoon with the performance of ‘Pica Pica’ on Tuesday and a day with attractions at a reduced price), seniors’ day and a fair strip without noise so that groups can enjoy the attractions with high sensitivity to loud sounds.

Access can be done on foot through the Potril tunnel, to the north of the Elena Benítez Pavilion, along a path that has been improved for the occasion, or by vehicle, as the venue has a parking lot enabled on an adjoining plot for 1,200 vehicles. A shuttle service will also be launched from San Pedro that will enter through the Nueva Andalucía access to avoid traffic jams and that will be in service from 1:30 p.m. to 3:00 a.m.

Both the day fair and the night fair are concentrated in the new space set up for this purpose. At 1:30 p.m. the day fair will begin while the attractions will start operating in the afternoon from 6:00 p.m. The different municipal spaces will have activities and live music.

8:00 p.m.: Official inauguration of the lighting of the Fairground in the entrance arch to the La Caridad enclosure followed by the coronation of the ladies and queens, reading of the proclamation and dance

13.30: Inauguration of the Day Fair followed by a visit to the active participation booth

6:00 p.m.: Opening of the attractions and performance in the municipal booth of ‘The humor doctors: Mimosín and Lolo’

19.00: Performance of the Pica Pica group in the municipal booth

19.00-21.00: Fair free of noise for the enjoyment of people with extreme sensitivity to noise

2:00 p.m.: Elder’s Day with joint lunch for the members of centers I and II of San Pedro followed by a sevillanas and pasodobles contest.

19.00-21.00: Fair free of noise for the enjoyment of people with extreme sensitivity to noise

18.30: Contest of dance schools in Palenque.