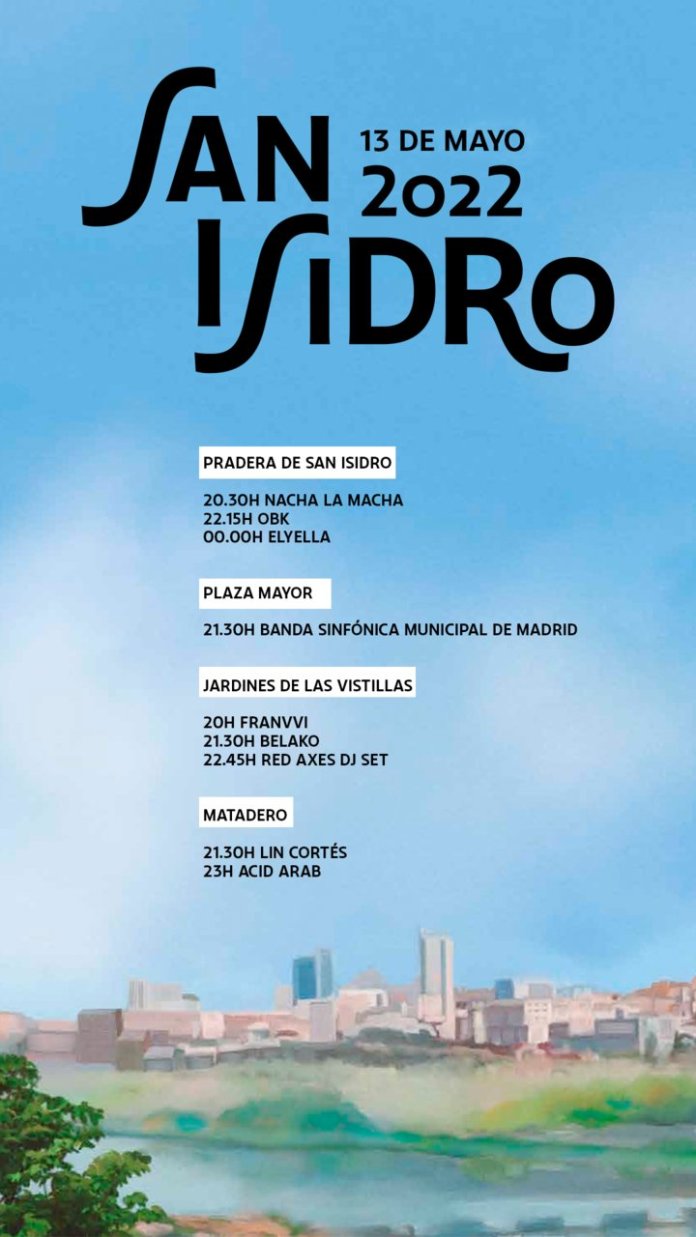 The free open-air concerts are one of the star plans of the San Isidro Festival in Madrid.

Today, Saturday, May 14, 2022 at 8:00 p.m. in the Main Square The jazz quartet of the trombonist and singer Rita Payés will perform with songs from her latest album Como la piel. And an hour and a half later (9:30 p.m.), the unmistakable voices of Amistades Peligrosas will fill the square with their usual hits for the enjoyment of nostalgic and new generations. At 11:00 p.m., the rapper and singer Maikel Delacalle will take over, a benchmark of the current urban scene both in our country and internationally, who moves between hiphop rap, dancehall and rhythm & blues.

In Slaughterhouse, on Saturday morning, May 14, the regional houses will offer their traditional tribute to San Isidro and, at 8:00 p.m., La Bien Querida will fill the stage with its powerful live show. It will be followed by performances by rapper Arkano and electronic music by Bronquio and his mix of flamenco sounds and Latin rhythms.

In The Vistillas Today, Saturday the 14th, the different groups that make up the Federation of Traditional Madrid Groups will perform, delighting the public with traditional chotis, pasodoble and goyesco dances, as well as fragments of zarzuelas. And in the afternoon, the long-awaited annual event of the Madrid Rock Villa Awards will be held, returning to its traditional setting. The winning artists and groups in this 42nd edition have been Morreo, Parquesvr and Free Sis Mafia, who will perform the songs that have earned them these important awards. The list of winners is completed by Alison Darwin, Vermú and Compro Oro, who have won the Radio 3, AIE and Sol Música Awards, respectively. Later, the well-known rock group Los Rebeldes will take the stage and Rusowsky, a fundamental pillar of new pop, will take over. And, to finish, DJ JASSS will offer a session of her particular avant-garde electronic proposal.

On Saturday May 14 at the Prairie of San Isidro Starting at 6:30 p.m. Petit Pop will make the whole family dance and enjoy. And from 8:00 p.m. until dawn, Jaime Lorente, Los Chichos, Derby Motoreta’s Burrito Kachimba and Silvia Superstar will perform on stage. On Sunday, at 6:00 p.m., La Chica Charcos and The Katiuskas Band will offer a fun cocktail of music, theater and humour. Then Cecilia Zango, Rojuu and Medina Azahara will go on stage and DJ Rocío Saiz will close the night.

San Isidro 22 concerts in Madrid on Sunday, May 15

The day of San Isidro in the Main Square at 6:00 p.m., LOS 40 CLASSIC return to the Plaza Mayor in style with a tribute to one of the most important albums in music history, London Calling by The Clash, and with star performances by Nena Daconte, Tam Tam Go and Nacha Pop.

In Slaughterhouse On Sunday, May 15, the party will begin at 12:00 p.m. with a collaboration with the Madrid Flamenco Festival, which, for the first time, takes to the streets in Madrid Río hand in hand with San Isidro to make everyone dance to rumba rhythm with El Rumbódromo, a choreographic piece by the Cía. Jose Manuel Alvarez. Next, the dancer Juan Paredes will offer an interactive master class so that young and old learn and appreciate the art of flamenco. And at 10:30 p.m., Plaza Matadero will be a party with El cuerpo del Disco, by DJs Eloi Vázquez and Yayo V. Codesido, who will offer one of their famous and fun sessions in which they mix from orchestral disco, boogie, house and Hi-NRG to current and 80’s electronic productions. All these concerts at Matadero Madrid are free admission until full capacity is reached.

On Sunday the 15th in The Vistillas Different choir and dance associations from Madrid will encourage everyone to dance steps and choreographies of the most traditional Madrid dances. In the afternoon, starting at 5:00 p.m., Mari Pepa de Chamberí and Olga María Ramos will perform their couplets and the most popular songs from the Madrid songbook. Starting at 9:00 p.m., Las Vistillas will be filled with the Latin rhythms of Pau Vidal and his musical project TARQUIM. They will be followed by the historic The Skatalites, with the sound of reggae music from their native Jamaica. And DJ Andy Gray will close the night with a wide repertoire of Latin rhythms, techno and Afro house.