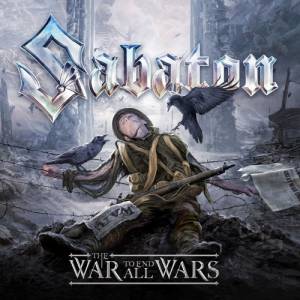 Sabaton had not quite finished with the “Der des Ders”. Despite the profusion of stories told by The Great War (2019), the Swedish giants had only scratched the surface of the richness of the defining stories of the First World War. Their tenth opus therefore takes up the concept and is seen as an extension of its predecessor. The War To End All Wars is again entirely inspired by the unfolding of the conflict and the implausible stories spawned by it. Sabaton obviously took advantage of the time left vacant by the pandemic to refine its narration and again made the choice to release a historical edition in parallel with the standard edition. If Sabaton acquired an increased knowledge in certain details of the military history, it makes precisely and wisely the nuance with the historical expertise as a whole of which it ensures not to be guarantor. What matters is giving power to the narrative. Thereupon, difficult to trap Sabaton.

Notable tracklisting effort, Sabaton decided to enshrine the content of the opus between two key chronological milestones: “Sarajevo” and “Versailles”. Either the significant event considered as the beginning of the First World War with the assassination of Archduke François-Ferdinand on June 28, 1914 and the Treaty of Versailles on June 28, 1919 which left the defeated countries bloodless. Above all, behind the contextual pageantry which is nothing new for Sabaton, we detect a desire not to necessarily repeat ad vitam aeternam the same gimmicks. “Sarajevo” divides the expression between the soaring vocals in chorus and a narrator who contributes to varying the dynamics of the title, between solemn lulls which briefly explain the growth of tensions and more muscular riffing. A construction that we find on “Versailles”, this time in the form of a celebration, with the chorus going into major mode, before darkening and coming full circle. Sabaton learns to slow down to leave a few monologues to his guitarists: The War To End All Wars gives more credit to their talents as soloists than the other efforts of their discography. Sabaton is also comfortable with mid-tempos, like the leaden rhythm of “Dreadnought” – reminiscent of the bridge of “Perfect Stranger” (Deep Purple) and transforming into leads to sing live à la “Fear Of The Dark” (Iron Maiden). However, there is no question of hiding the cavalier rhythms that justify the military fatigues: “Stormtroopers” is a typical exercise of Sabaton, a power-metal grand spectacle dedicated to great sentimental outpourings and accessibility. This is precisely and legitimately responsible for the success of training today.

The War To End All Wars, however, deserves close attention not to miss the ubiquitous compositional efforts. Sabaton does not reinvent anything in relation to the genre, it nevertheless seeks to articulate itself differently. “The Unkillable Solider” – a title dedicated to Sir Adrian Carton de Wiart, survivor of a large number of injuries, each more serious than the last – illustrates the process perfectly. An energetic riffing, a bridge with heroic choruses that rebuilds the listener’s anticipation and a surge of solos to arrive at the conclusion. There are also some musical influences that have not been heard of until now in the band’s discography, such as “Soldier Of Heaven” which draws its keyboard sounds and its cyclical riffing from the industrial/electro of the early 90s. while inaugurating a first-person narration. “Chrismas Truce” (the famous episode of fraternity between German and British soldiers during Christmas 1914) is an opportunity to present some characteristic piano melodies of the Chrismas Carols, on which Joakim Brodén has a field day deploying all his expressiveness. “Hellfighters” – a reference to the 369th regiment made up mainly of African-American and Puerto Rican soldiers – has its eye on the side of thrash from the origins and presents itself as one of the most energetic titles in Sabaton’s discography.

The War To End All Wars fully respects the quality standard introduced by its elder, by redefining certain contours. Those who are refractory to the universe of Sabaton will not benefit from a truce. Sabaton persists and signs: it asserts itself as one of the most spectacular groups of its generation where the music must arouse the greatest possible adhesion. We can criticize the group on the musical level if the codes of heavy and power cut for stadiums do not suit us. On the rest, Sabaton does not glorify the war and has literally no pretensions other than the love of History. He tells stories that are part of the big in his own way and doesn’t deny that heroism and implausibility often juxtapose horror. The War To End All Wars does not say otherwise.

Video clip of the song “The Unkillable Soldier”:

Video clip of the song “Soldier Of Heaven”:

Album The War To End All Warsreleased on March 4, 2022 through Nuclear Blast. Available for purchase here

Sabaton – The War To End All Wars – RADIO METAL