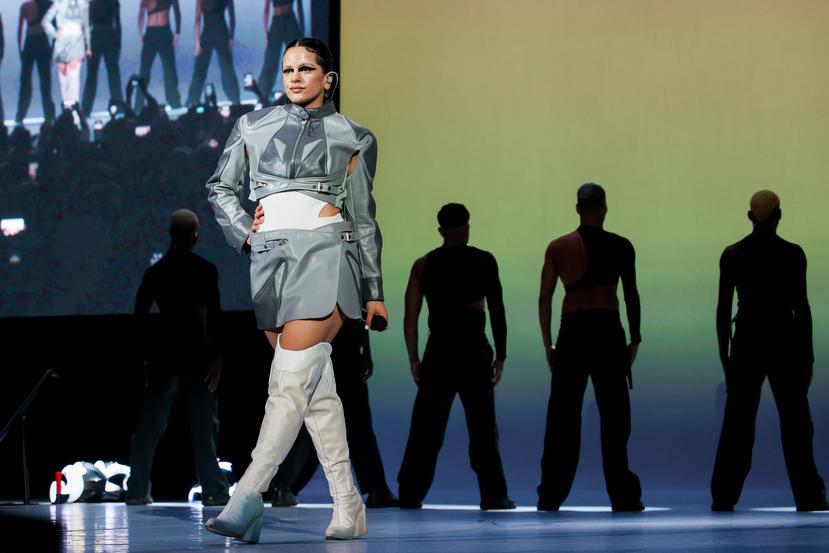 The Spanish urban artist Rosaliaimposed his distinctive energy since he appeared on stage on Friday night in what was his concert presentation (to a full house) at the Jose Miguel Agrelot Coliseum of Puerto Ricoas part of his first “Motomami” world tour.

It was enough to put her feet on the stage, for the Spanish urban artist to let her distinctive energy be felt during Friday night in what was his concert presentation (to a full house) at the José M. Agrelot Coliseum of Puerto Rico, as part of his “Motomami World Tour”.

The powerful sound of a motorboat anticipated her arrival on stage, where she was fun, sweet and sensual before an audience that made it clear how eager she was to see her, this being the first time that the Catalan singer had formally performed on Puerto Rican land.

At the edge of 10:00 at night, Rosalía came out with her “motopapis” and her illuminated helmets to make way for the first song of the night “Saoko”, which was energetically sung by the public, who shouted when they shouted “Puerto Rico” while wiggling her buttocks. This contrasted with the softness of the song “Candy”, but which rose again in intensity with “Bizcochito” and “La Fama”, a collaboration of the singer, who came to record with The Weeknd, and whose musical base is bachata.

“A long time ago, when I was 13 years old, I was with my cousins ​​and we listened to reggaeton at every party. I remember the first time I heard a song that I will never forget, called “Baila Morena”. Over the years I have discovered reggaeton, which I like so much. I feel enormously grateful to be here and to be able to sing to you”, he mentioned.

As if what was said did not seem to inflame his fans, it was time to express, after a pause: “In addition to the fact that the love of my life is from here. That is why you also know how special it is to present myself here, ”she expressed full of emotion when referring to the Puerto Rican urban singer. Raww Alexanderwith whom he has a romantic relationship.

With guitar in hand, he performed “Dolerme”, to later continue with “De Aqui No Sales/Bulerías” and “Motomami”, in which he joined as part of the choreography.

From praising the “outfits” of his fans, interacting with the public, singing a birthday to a person, reading a label with a message for her, until reaching an emotional part in which he dedicated the song “G3 N15” to a relative of his, marked a night full of complicity with his fans. Similarly, she easily changed the environment to inject dynamism with the theme “Linda”.

The artist, who came to revolutionize the music scene in 2018 with her reinterpretation of flamenco on the album “El mal Querer” with pop and electronic sounds, captured on stage the transformation that came with “Motomami”, an album in which she rather urban sounds are focused, including bachata, bolero and reggaeton.

Precisely from this production were the majority of the thirty songs that he performed in the almost two hours of concert, on a simple stage with three screens, white background, together with eight dancers, without any musician on stage and without any surprise guest artists.

Another special moment in which he connected with the public was when he interpreted the song “La noche de Anoche”, which he recorded with the Puerto Rican urban exponent bad bunny. Despite the fact that the singer of “Titi asked me” was not present, the singer took the opportunity to go down and get confused with her fans, who chorused her and showed them affection.

stripped of makeup and extensions

As if it were about marking another stage in the evening, while singing “Diablo” and the red lighting began to take over the stage, Rosalía sat alone on the stage with a towel to begin removing her makeup, as well as some hair extensions. her hair, which she chose to release to the public.

“Pienso en tu mirá”, “De plata” and “covers” such as “Perdóname”, by La Factoría, and “Blinding Lights”, by The Weeknd, were part of the wide repertoire.

In what was another meeting with the fans, he came up with the song “Abcdefg”, where he asked the public to answer the alphabet, in which the “P” of perreo stood out.

This served as a prelude to other great moments of the evening, in which those present were activated dancing with a reggaeton “medley” that included “La Combi Versace”, “Relationship”, “Accelerate”, “TKN”, ” Papi Chulo”, “Gasolina”, “Yo x ti, tú x mí”, to culminate with the acclaimed “Despecha”.

The winner of eight Grammy awards and a Latin Grammy, who did not have a costume change, but whose staging remained impressive, presented the new song “Isolation”, which she included on her recently released album titled “Motomami +” , an updated version of his album “Motomami” and that has 8 songs in total.

With words of gratitude and affection, he sang “Sakura” and “CUUUUuuuuuuute” to end the night of the concert that is part of his world tour this year in 15 countries, including Spain, Mexico, Brazil, Chile, the United States, Canada, Italy, England, the Dominican Republic, Colombia and France, where it ends in December.


Find here our social media profiles , as well as other pages that are related to them.https://kjovi.com/related-pages/