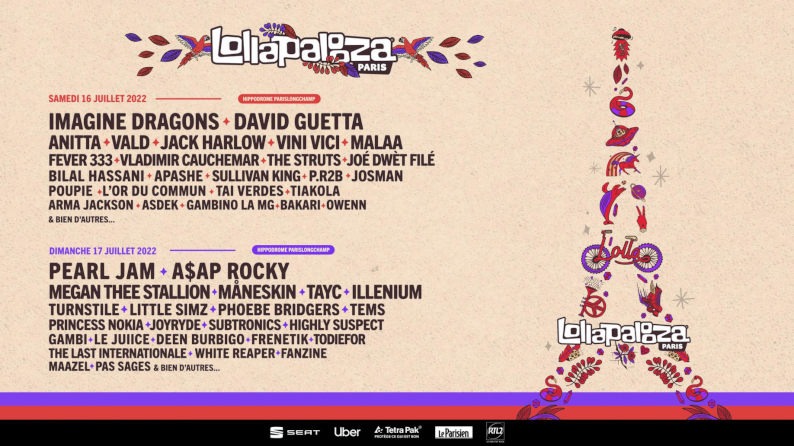 Well, it is clear that without Pearl Jam, I would never have set foot in the festival Lollapalloza Paris. Apart from the group led by Eddie Vedder and Maneskin I didn’t know much about programming and some names give me heartache.

It is therefore at the end of the day that we go to Longchamp, by car because we come from the suburbs, despite the fact that the festival is a “festival without a car”. Finally we will manage to park without too much trouble and not too far from the entrance. Arrival on the site, it is clear that we are very far from Hellfest :-). Apart from a poor model of the Eiffel Tower, nothing to brighten up the site… 2 main Stages, another stage on the opposite side, and in the middle of endless tents with bars, food and full of stands of fashionable brands (makeup, clothes, etc.), help. As for the ground, a mixture of sand and grass scorched by the sun which raises clouds of dust at the slightest movement of the crowd, it’s really average.

So, let’s get down to business. We position ourselves in front of the West mainstage, the one we’re interested in, and we huddle while waiting for a sonic porridge that comes from the East mainstage where a very vulgar girl shakes her ass in rhythm to a pseudo music sip of infrabass, unbearable. Especially under a blazing sun and by 40 degrees in the shade.

At 7:15 p.m., Maneskin invests the scene and despite the fact that I only know a few titles it’s a very good time that we are going to spend. The Italians have a fucking good catch on stage, the singer is 200% and the little bass player with her smile permanently hanging on her face and her sexy side really rocks on her instrument. The hits follow one another and the group even enjoys a walkabout on the resumption of Stooges “I wanna be your dog”. The hour allocated to Maneskin’s show quickly passes in front of a conquered audience.

The next 1 hour and 15 minutes will still be unbearable. We managed to find a good place close to the stage but the overwhelming heat and especially the performance on the other mainstage of a rapper named Asap Rocky will make this waiting time turn into a very bad time. The type of language limited to “Fuck”, “fuckin shit of fuckin fuck”, “mothermuckers” and the bass sound (recorded of course, zero musicians apart from the pseudo singer) is just horrible. A crowd of over-excited kids seem to appreciate… Am I too old? Fortunately, the crowd that gathers at our side seems to agree with us and is patiently patient…

At 9:30 p.m., it’s deliverance and Eddie & Co take over the stage! “Why go” opens the show of Pearl Jam and it’s a 31 year plunge back. What a joy to see Vedder, Ament, Gossard, McCready a few meters from us!. The sound is strong but rather clear (with a bass drum and the bass a little too forward for my taste). Eddie Vedder is in voice despite some hiccups on somewhat high notes and he carries around his bottle of red as usual. The American group seems happy to finally return to Paris, Eddie repeats it several times. The set list is pure happiness with among others: “Mind your manners”, “Daughter”, “Not for you”, “Given to fly”, “Jeremy”, “Black”, “Porch”, “Alive”.. Eddie doesn’t hesitate to stop the sow when he sees someone feeling bad in the middle of the audience to have them evacuate. The class! The two hours pass far too quickly, but what luck to have all these mythical titles, especially when you know that the group changes its set list at each concert. The lightshow is nice but nothing more, the scene is, qaunt to it, very sober with a single black backdrop in the background. All around us are fans who sing the band’s hits with a lot of voice. Taking a step back at the end of the show, I hallucinate about the world behind us and I tell myself that they could have stuffed a Bercy without any problem. We run away when the “Who” (“Baba o’Riley”) resumes, which closes the show in order to avoid traffic jams. And it’s with stars in our eyes that we go back to sleep. I hope we won’t have to wait 10 years to see Pearl Jam in France again!