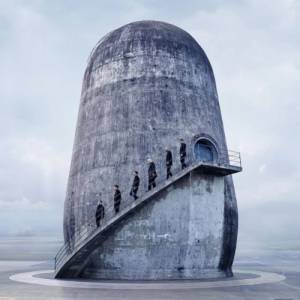 What do performers like the members of Rammstein do when a global pandemic forces them to postpone their titanic tour? Like many of their comrades in an industry very affected by the consequences of the coronavirus, they are returning to the studios, and this barely a year after the release of a seventh album, Rammstein, which, according to the words of guitarist Richard Z Kruspe, could have been the last. Released after ten long years of silence in 2019 and reviving electro sounds that the Germans had somewhat neglected, it was a pleasant surprise for fans who no longer dared to hope for so much. Fruit of a creativity reinvigorated by the cancellation of concerts and the austerity of confinements according to Flake, the keyboardist of the group, Zeit, eighth album which comes out only three short years later, promises to be the opportunity to push the nail for a band that has nothing left to prove.

In more than twenty-five years of career, Rammstein has refined his formula, declined with new inflections on each album. Zeit does not cut it with its eleven ritual titles, its range which goes from conventional to the most audacious and from heaviness to ballads, and its traditional first title-manifesto, this time entitled “Armee Der Tristen”. With its Depeche Mode-style synth layers and its direct address to the listener, whom the band invites to join its army to “be sad together”, it sets the scene for a Zeit that is more atrabilaire than incisive, holding more dark pop than the testosterone metal of his debut, in the tradition of “Halloman”, for example, which closed the previous album. And it’s not the following titles that will falsify this impression, between the ballad chosen as the first single of the album, “Zeit”, and “Schwarz”, a sort of hymn to the pop rock night, elegant with its opening at the piano and its cavernous bass lines. The production, again carried out by Olsen Involtini, highlights this pop facet: smooth, extremely neat, it gives pride of place to the keyboards and voice of Till Lindemann, whose expressiveness and storytelling qualities carry the album.

Not that the six Germans have lost their sense of the riff and the grandiose, nor forgotten where they come from. We can easily imagine “OK”, “Adieu” or “Angst” resonating in the stadiums, especially the latter with its somewhat tribal percussive opening, its ultra-heavy syncopated break and Lindemann who revives his “Puppe” prowess at the end . The nods to the band’s past are less emphatic than on Rammstein, but we find something of “Sehnsucht” in the orientalizing melodies and the synthetic opening of “Gavid”, of “Los” in the acoustic riff of “Zick Zack,” and of “Mutter” in the ballad “Meine Tränen,” with its complicated mother relationship story and epic rise to power. Even the inevitable “Pussy” schoolboy interlude is not missing with a “Dicke Titten” (“Big tits”) which mixes Oktoberfest-style brass band and riff to dislocate the cervical for a result of such questionable taste than you can imagine, but which will no doubt be taken up with enthusiasm by thousands of spectators this summer. All without taking great risks, of course, but we did not expect such a war machine to reinvent itself after nearly three decades of existence. The greatest audacity that the Germans allow themselves on this album, and there is no doubt that it will make people cringe, is the use of Auto-Tune, by keys throughout the disc, then in overdose on the end of “Lügen”.

If the relative proximity of the release of the album with the previous one could lead to fear of a Rosenrot effect – an impression of a hasty collage of studio scraps – this is not the case here: Zeit pursues some of the tracks opened on Rammstein but shapes its own tone, its own unity. With members who are all over their fifties, the passage of time imposes itself as an overall theme, whether in a comical tone (“Zick Zack” and his satire on cosmetic surgery and its promises of eternal youth) or more serious, often bittersweet (“Zeit”): nothing lasts and things evolve naturally towards their end. Singular group that stands out as much from its influences as from those it would have inspired, comparable only to itself, it explores here its most adult dimension, relatively sober and consensual, more melancholic than boosted. With a song called “Farewell” in the final position, one wonders if the Germans are not bowing out, offering this album as a last hug to their fans before telling them to continue without them, but difficult to know what to expect with Rammstein. Considering the announced tour, it will in any case not be before a last series of explosions…

Video clip of the song “Zeit”: