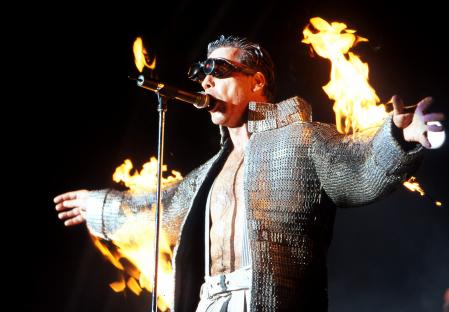 Rammstein has stood up to one of the main ticket resale companies: Viagogo. The German heavy metal group and its European promoter MCT Agentur have filed a lawsuit against the platform to prevent speculation in the sale of tickets for their 2023 tour. In this way, they can only be purchased through the authorized platform Eventim and the band’s official website. Also from the concert scheduled in Madrid on June 23.

Ticket resale companies have become a real nightmare for many singers and promoters, who see their concert tickets sell out in a matter of hours. This trend has an explanation. Platforms like Viagogo or StubHub buy stays en masse and then try to resell them at a higher price. Rammstein has said enough and has gone to court to put an end to this practice, in which the most affected are the fans.

According to the specialized media IQ, Rammstein and the European promoter MCT Agentur have filed a lawsuit against Viagogo at the Hamburg Regional Court so that the platform cannot sell concert tickets for its European tour. This court order is “based on the consumer protection regulations that were recently defined in May 2022.”

To avoid the abusive sale of tickets for their concerts, in addition to filing a lawsuit against Viagogo in court, Rammstein has also decided that they be nominative and individual tickets. That is, at the time of purchase, the buyer will have to enter a name and their ID. In this way, any ticket purchased through a resale page will not be valid and, therefore, will be considered a fraud.

Music sector and consumer protection associations criticize that resale pages deceive the user by considerably increasing the price of the original ticket at the expense of the work of artists and promoters. To this situation we must add the alarming number of cases with duplicate tickets that prevent attendees from being guaranteed access to a concert for which they have paid.

Rammstein already warned in 2018 that resellers are capable of making their posts appear in the first positions of Google searches, to the point that official channels take a backseat.

Viagogo will no longer be able to sell Rammstein tickets through its platform. On the controversy, the ticket resale company’s lawyer, Sebastian Ott, has said: “Buyers often do not realize that they are not buying their tickets from the organizer but on the secondary ticket market. The legislature has recognized this deficiency and has acted.

Promoters and artists criticize that with the resale of tickets there is a kind of legal vacuum. In the digital world, it is a very common practice that is not yet fully regulated. For this reason, Rammstein has decided to take action and sue these companies directly so that the judges make a timely decision.

A regulation to limit the sale of tickets online

Two months ago, the Organization of Consumers and Users (OCU) asked the Ministry of Consumer Affairs to promote regulations to limit the sale of online tickets per owner for concerts and festivals “in order to control and reduce subsequent resale due to abusive prices and without any minimum guarantees.

In a statement, the OCU discouraged consumers from buying any type of tickets through resale, “since even apparently legal web pages gather all kinds of complaints and claims.”

The consumer organization explains that the bad practices it has collected are very varied: abusive sales commissions, sale of false tickets (already sold before to other people), prices three or four times higher than the official ones or purchase processes that end abruptly without entry and with the money collected, among others.

The OCU also reminds that, even in the case of a valid ticket, if the concert is canceled or the date of performance is modified, the right to return will be for the face price of the ticket and never for the extra cost generated by buying it through the OCU. resale as a result of commissions and intermediaries.

Rammstein stands up to Viagogo: you will no longer be able to buy tickets for their concerts in Europe