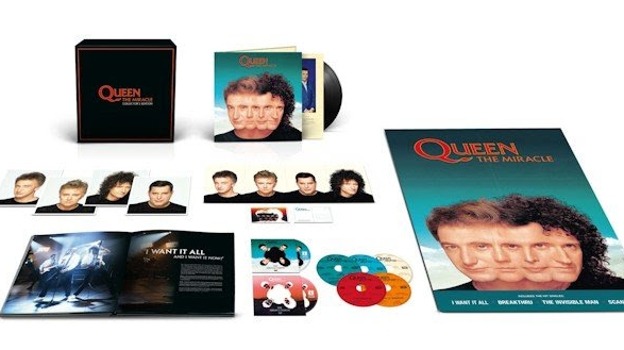 The trunk of the archives of unreleased recordings of What inholy grail of the most staunch fans of the British band, has left a small loophole through which to peek into one of its best kept secrets: the song face it alonea song discarded from the ‘Miracle’ sessions, the album they released in 1989, two years before Freddie Mercury’s death.

Listening to the voice of the legendary singer in a song from the eighties that has never been heard before seems like an almost religious experience for the band’s devotees, who have been biting their nails all week after the announcement made by the group, that has placed promotional posters in many cities around the world.

The surprise crushed them a little Brian May and company a couple of days ago, when a French radio station skipped the bullfighter’s time by broadcasting the entire song on Tuesday afternoon. But that has not prevented this Thursday, October 13, from becoming an important date in the history of Queen.

“We found a little Freddie gem that we had forgotten about. Personally I have to admit that he did not remember the existence of that song, but I think it’s fantastic. It has been wonderful. It’s actually been a real find,” drummer Roger Taylor said in an interview, in which his fellow guitarist revealed that at first it seemed like mission impossible to rescue her because the recording wasn’t in optimal condition, but that his engineers worked the miracle by making only a few minor modifications. “It was hidden in plain sight,” May explained. “At first we listened to her and said, ‘no, this is not salvageable.’ But we listened to it again with a team of engineers and they told us: ‘Okay, we can do this, and this other. It’s going to be like sewing together pieces of cloth, but it’s going to be beautiful and moving.

The arrival of the single is the first stage that will lead to November 18, the date on which a new reissue of the band’s 13th album, ‘The Miracle’, will be released, the penultimate of the group that was released during Freddie’s lifetime, and which will now be available in a fantastic collector’s edition box ‘Queen The Miracle Collector’s Edition’.

Among its content, this expanded format includes the ‘Miracle Sessions’: a one-hour disc of more unreleased tracks, including six previously unreleased songs. The audio includes the band’s candid chats in the London and Montreux studio, providing a revealing insight into the creative process of the four band members and the joy, jokes and talk they shared on working together again.

‘Face It Alone’ was originally recorded during the band’s historic 1988 sessions for the album, a prolific period, which saw the band create over 30 tracks, many of which never saw the light of day and remained unreleased. the final cut of the album. They were rediscovered when the band’s production and archive team revisited the work sessions to publish the reissue of The Miracle.

In 2014, Queen included Freddie Mercury’s duet with Michael Jackson on ‘There Must Be More to Life Than This’ on their greatest hits compilation ‘Queen Forever’, but this is the first time a never-before-released piece has come out. Following Mercury’s death, no truly unreleased Mercury track had been released until June 2019, when Universal Music released ‘Time Waits for No One’ an alternate version of a 1985 song called ‘Time’. However, ‘Face it alone’ is a brand new composition that no one has ever heard, so this Thursday’s release is a much more important milestone.

A live album and a Rolls-Royce up for auction

A couple of weeks ago, drummer Roger Taylor released a live album recorded during his successful October 2021 ‘Outsider UK’ tour, in which the founding member of Queen performed a series of ‘intimate’ shows: “It’s my tour ‘modest’, so to speak. So I just want it to be really fun, really good musically,” Taylor said in announcing her first live performances outside of Queen in more than twenty years. Released on vinyl, double CD and digital, ‘The Outsider Tour Live’ It contains 22 songs performed on a fourteen-date tour that swept the box office, since all of them were sold out.

The other novelty related to Queen is that A 1974 Rolls Royce Silver Shadow that belonged to Freddie Mercury just went up for auction. The singer acquired it in 1979, and although he rarely drove it because he did not have a license and almost always had a driver, the vehicle is an object of great historical value for fans, since many of the contracts were signed inside it. the band. This is how Jim Beach, one of Queen’s managers, told it: “Freddie insisted that we sign all the contracts, all together, in the back of the ‘Roller’, because this was the first Rolls he had ever owned.”

After the death of the leader of Queen, in 1991, his sister Kashmira Cook inherited it. In 2002 it was used as a promotional element in the premiere of the musical ‘We will rock you’, and in 2013 it was auctioned and acquired for 89,700 euros by a Russian businessman. It will now be auctioned again by RM Sothebys in order to help Superhumans of Ukrainea charity that is raising funds for the creation of a hospital in the Ukrainian province of Lviv.

Queen bombshell: they release an unreleased song with Freddie Mercury on vocals, ‘Face it alone’