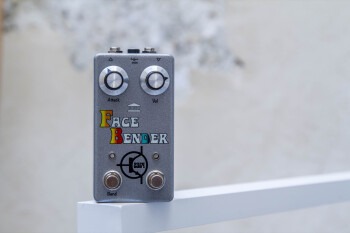 If there are two fuzz pedals that have marked history, they are the Fuzz Face and Tone Bender Mk2. Upon their release, these two guitar effects legends were adopted by the greatest Guitar Heroes of the day (Jimi Hendrix, Jimmy Page, Ritchie Blackmore and many others), contributing to their success. Nowadays, and especially for the past two years, brands have been constantly releasing re-editions of these legendary pedals. So much so that the offer of Fuzz pedals is very extensive today and it can be complicated to find your way around and make a choice. Surfing on this wave of the great return of the Fuzz, PFX Circuits approached the subject from another angle. The initial idea is of course to pay tribute to these two circuits well known to guitarists but by offering a more modern approach.

The Face Bender was delivered to me in its cardboard box, well wrapped in a small hemp cover and its protection in bubbles. It’s nice to see the brand growing and moving upmarket when it comes to packaging; the small fabric cover brings a certain cachet to the whole, it’s nice. The pedal is well finished, we find the famous 125b Power Coat case in silver color and the serigraphs in UV printing. It has a weight of 297 grams. The look of the Face Bender is nice, the colors chosen complement each other well and the potentiometer knobs are very stylish in addition to being pleasant to handle. They are reminiscent of potentiometer knobs on Dumble amps. Philippe, as a well-informed musician and electronics engineer, chose silicon transistors, the famous PN2369. They offer a saturation very close to that provided by Germanium transistors, but being much more stable, especially during temperature changes. The settings on the pedal are as follows:

The operation of the pedal is quite simple; it engages with the right footswitch, we then obtain the circuit of the Fuzz Face, alone. Applying pressure to the Bend footswitch activates the Tone Bender Mk2 circuit. Each footswitch has its activation LED. Yes, there is enough gain for most situations. We can therefore use the Fuzz Face circuit alone or that of the Tone Bender Mk2 alone. Each circuit has its own input capacitor so that they are distinct. After this owner’s trick, I install the Face Bender on my Pedalboard and start playing.

The manual supplied with the pedal explains that the Attack setting is finer than on the original pedals. On the latter, the majority of users place the Attack setting on its maximum position, without asking any questions. This is indeed the setting that generally sounds the best. But the Face Bender, thanks to a good job of calibration, has an Attack setting with a much more progressive stroke. You can therefore enjoy very nice Low-Gain sounds without necessarily having to lower the volume of your guitar. Volume and Attack settings affect both channels at the same time. The Fuzz Face circuit, like that of the original pedal, reacts extremely well to the volume control of the guitar. You can easily get a clear sound by lowering the volume and bringing the Fuzz little by little, it’s very nice and allows a hyper musical use of the effect. It is with this approach in mind that Philippe created the Face Bender. The idea is to have a “rhythmic” sound with the Fuzz Face that can be lightened with the volume potentiometer and to activate the Tone Bender Mk2 when soloing, for much more sustain and natural compression. This is just one example of the many possibilities offered by the Face Bender. Thanks precisely to the long travel of the Attack setting, the pedal is extremely versatile for a Fuzz, and above all, extends the possibilities of the two circuits to which it pays homage.

The feeling of play is excellent, the pedal reacts well and got along with the vintage single pickups of my Telecaster and the PAFs of my Gibson SG. When it comes to getting along with her sisters, the Face Bender is easy going although she will prefer to be placed first in the chain. I tested it on a clean sound and a slightly saturated sound, in both cases, the Face Bender is doing very well. The sustain developed once the Bend mode is activated is simply enormous and promotes very expressive Blues playing. Moreover, the character of the saturation is very singular, the frank attacks on the low strings tend to crash a little, it’s very nice. The Face Bender is a super musical pedal, endearing and easy. I did not find a single setting on which it sounded bad, you quickly find the setting that corresponds to the sound you are looking for.

Fuzz Face and Tone Bender Mk2 are on a boat, but no one falls overboard

The Face Bender is innovative, cleverly designed and brings a lot of versatility to an effect that is often lacking. If it were necessary, PFX Circuits proves to us once again that it masters its subject by signing a successful and endearing achievement. Made entirely by hand in France and offered at a price of 179 €, the Face Bender has a good quality/price ratio. If you are looking for a classic but atypical Fuzz at the same time, run to try it at your favorite retailer!