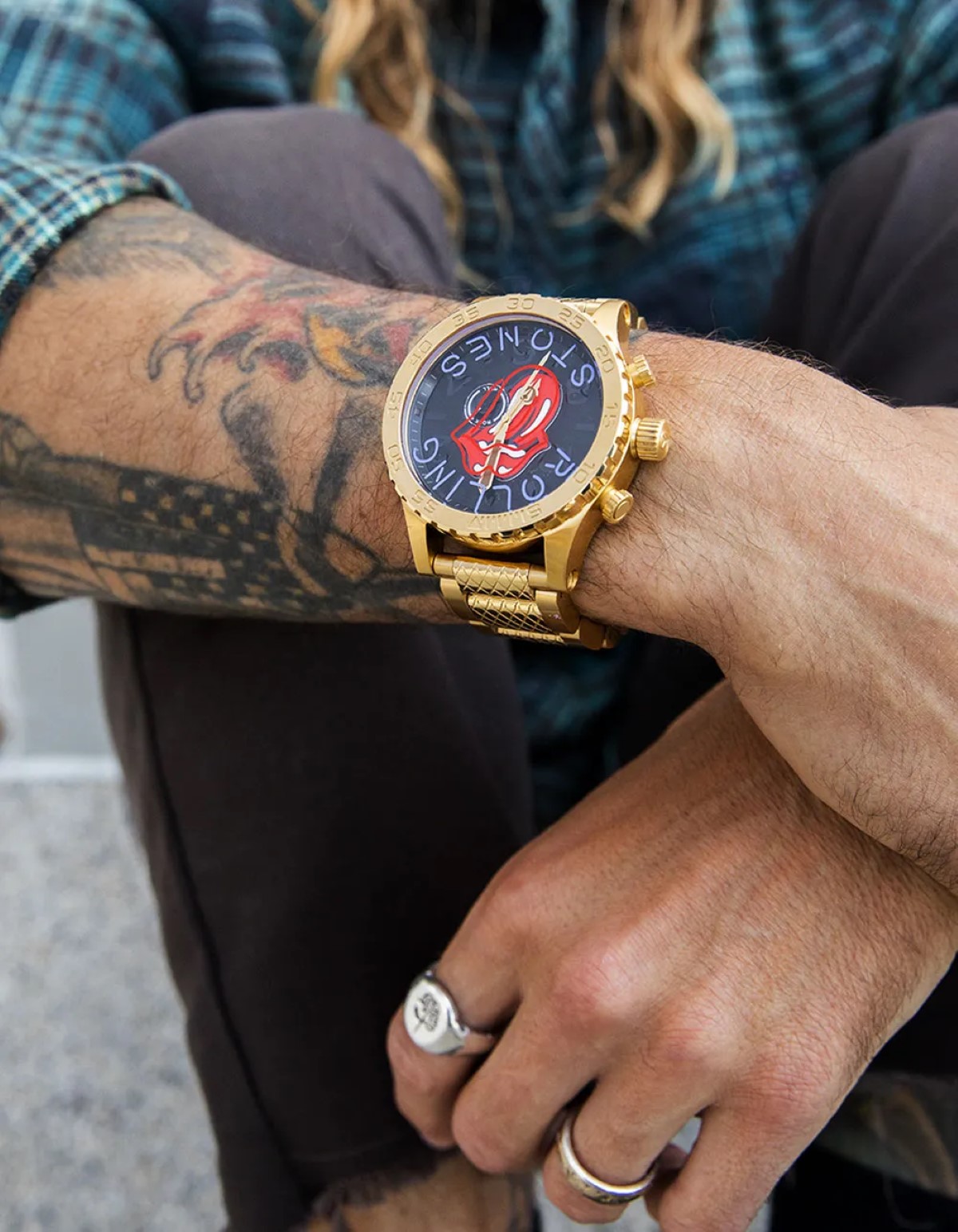 For the 60th anniversary of the iconic rock band, Nixon and the Rolling Stones have teamed up to create a capsule of limited edition watches, watch straps and other accessories.

Rolling Stones fans – the legendary band have just wrapped up their European tour”SIXTY”, with 14 concerts in 10 countries on the Old Continent – ​​are always spoiled for choice when it comes to offering derivative products on the group. The announcement of the new watch collection Nixon x The Rolling Stones will not make their task any easier since it includes a wide range of proposals which are planned to be launched in two phases.

The first half of the collection, available to buy now on Nixon.com, includes five watches and two replacement straps, ranging from affordable and stylish watches to more upscale limited-edition ones that let you proudly display your passion for the Stones on your wrist.

The star of the Nixon x The Rolling Stones collection is this automatic Rolling Stones Primacy.
Available in only 250 pieces, the watch embodies the Rock’n’Roll aesthetic par excellence, to the delight of collectors.
It features a stainless steel case, a vintage-looking dial with the famous woven tongue and lips, gold-tone hands, a blued date window, a three-hand automatic mechanical movement made in Japan. as well as a water resistance up to 100 meters.

This 51-30 from Nixon takes its name from the size of the dial (51 mm) and its degree of water resistance (30 ATM).
The tongue and lips adorning the dial as well as the Rolling Stones neon-like font surrounding them are reminiscent of “the notes of the first concerts of the Stones in the bars of London”. The crown and the pushers located at 9 o’clock of the watch instead of 3 o’clock are for “avoid wrist irritation during strenuous activities”.
A 4-hand Miyota Japanese quartz movement and a unidirectional rotating bezel for an analog countdown complete the design.

This Nixon x The Rolling Stones Time Teller is available in two versions: in “Gold” and “All Red” color. The watch is a nostalgic nod to the golden age of Rock’n’Roll legends. It is equipped with a Japanese Miyota quartz movement with three hands and a water resistance of 10 ATM (100 meters).

Combining a rock’n’roll identity with a new-age spirit, the Nixon x Rolling Stones Staple, with the bright yellow case and its voodoo illustration, pays homage to the album Voodoo Lounge of the Stones. Made from Nixon’s Other People’s Plastic material made with recycled plastic (Other People’s Plastic), the watch sports an ultra-thin silhouette and includes numerous features such as a customizable display allowing two functions to be displayed simultaneously, an automatic calendar up to ‘in 2099, a chronograph with 1/100 second resolution, a performance-oriented strap and water resistance to 10 ATM (100 meters).

Visit now at Nixon.com to gift you one or all of these pieces, but hurry, as these limited-edition pieces will go fast. Also, be sure to keep your ears open for Part 2 of the collection, due out later this year.


Take a look at our social media accounts along with other pages related to themhttps://kjovi.com/related-pages/